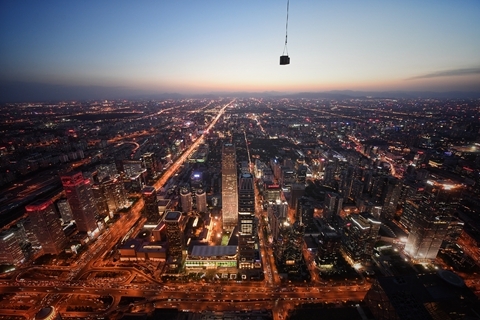 The municipal government put 13 plots up for auction with 12 of them selling, according to the capital city’s land and resources regulator. The number of plots sold and the total transaction value hit record highs.

Eleven of the plots are designated for residential project development, including two for subsidized housing, according to the government website.

About 50 developers submitted bids for the parcels, but the biggest players, especially private ones, were absent from Beijing’s Monday auction.

Zhang Dawei, chief analyst at Centaline Property Agency Ltd., said that as developers face rising financing costs for land purchases and greater challenges in raising funds, it will be more difficult for private players to bid for pricey land deals.

Beijing has sped up land auctions to meet its annual supply target by the end of this year. The city in June said it would put 1,200 hectares of residential land into the market and 650 hectares of land for commercial use. The goals were equivalent to the city’s land sales in 2017.

But the market has shown signs of cooling this year as China’s economic growth slows and the government retains tight controls on the property market. According to Beijing Hop Choi Real Estate Brokers Ltd., the city has reached just 35% of its supply plan as of Monday.

Data from Centaline showed that Beijing sold 53 plots as of Nov. 26 with transaction values totaling 152.6 billion yuan, down 41.5% from the same time last year. Developers paid an average 13% premium for land deals this year, compared with 25% last year.

But recent liquidity-easing measures to bolster growth have encouraged land deals in some cities including Beijing, Guangzhou and Nanjing, analysts said.

To attract bidders for the Monday auction, Beijing land authorities relaxed restrictions on deposits, allowing bidders to use one deposit for bidding on multiple plots. Developers are usually required to put up as much as 20% of the total value as deposits for bidding.

Zhao Xiuchi, a land and property market expert at the Capital University of Economics and Business in Beijing, said the relaxed deposit rule effectively lowered the threshold for developers to participate in bidding.

Centaline’s Zhang said homebuyers in Beijing will be less eager to make purchases in the next one or two years as market supply increases.

Nationwide, home sales in October remained lukewarm with home-price growth slowing from the previous month in major cities. New-home prices in the four first-tier cities — Beijing, Shanghai, Guangzhou and Shenzhen — remained flat month-on-month in October, while the growth rate for prices of existing homes dropped to 0.2%, according to the National Bureau of Statistics last week.

The investment bank China International Capital Corp. (CICC) in a recent report warned that China’s real estate market will face “a year of recession” in 2019 as sales, investments and new construction is expected to decline.