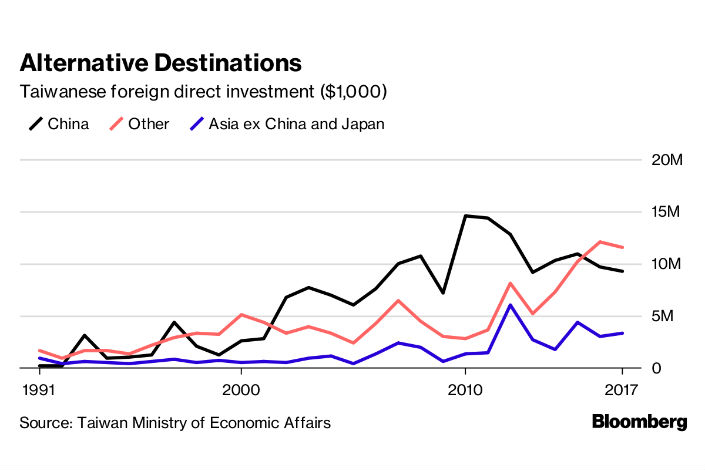 (Bloomberg) — One of the biggest beneficiaries of the clash between the U.S. and China may turn out to be a gritty Taiwanese town called Taoyuan.

The former Japanese enclave west of Taipei had long suffered as local companies shifted factories to the mainland to benefit from lower wages and globalizing trade. But with tensions escalating between the world’s two largest economies, Taiwan’s biggest tech firms are now moving some production back home and many are turning to this city of 2 million on the northwestern coast. The trend may have gained a boost after Donald Trump signaled he’ll likely push ahead with increased tariffs.

Taoyuan doesn’t offer much in the way of glitz. But it does boast an hour’s drive to Taipei, hosts the island’s primary international airport, and overseers who’re aggressive supporters. That’s why it’s a hot destination as the manufacturing powerhouses behind the world’s electronics scour the globe for alternatives. The moves threaten to splinter a decades-old supply chain, in which Taiwanese giants assemble devices out of sprawling Chinese bases that the likes of HP and Dell then slap their labels on.

From iPhone assembler Pegatron Corp. to laptop maker Compal Electronics Inc., they’re now preparing for an end to an arrangement that’s served them well since the 1980s. Along with fellow Apple Inc.-supplier Inventec Corp., the trio are among those adding capacity in Taoyuan, with announcements coming as Washington and Beijing ramp up the rhetoric over trade and tariffs. Others like Quanta Computer Inc. are snapping up or seeking factory land. The city’s population is now the fastest-growing in the country even as U.S.-Chinese tensions dampen the global economy.

“Our operation model will see a major change from the past two decades,” Pegatron Chief Financial Officer Charles Lin told analysts an earnings call on Nov. 8. “In the future, production will be spread out in different countries and we will not be able to build mega-plants in other places like those in China.”

Trump said Apple iPhones and laptops could be hit by new tariffs, according to an interview with the Wall Street Journal. The U.S. president said he’s prepared to impose tariffs on a final batch of $267 billion of shipments if he can’t strike a deal with China’s Xi Jinping when they meet at the Group of 20 meeting starting Friday.

Thirty years ago, many companies based in Taoyuan and elsewhere on the island decamped for China’s lower costs, helping create the world’s factory floor. While Taiwanese government data shows investments in China peaked around 2010, they remain a formidable presence. Fifteen of the top 20 exporters from the mainland to the U.S. in 2016 originated in Taiwan, according to a Chinese state-run customs data website.

Now, increased tariffs threaten to compress already razor-thin margins. Higher wages will make it more expensive to produce in Taiwan, as will losing the efficiency gained by having the supply chain located close together in China.

“With tariffs expected to rise to 25 percent, it will push Taiwanese companies to expedite their plans to go home or build operations in a new location,” said Angela Hsieh, an economist at Barclays. “Yet there are still a lot of uncertainties surrounding a trade war, so companies tend to first add capacities in their existing facilities in Taiwan instead of spending a lot to build new plants.”

That’s where Taoyuan comes in. While some of Taiwan’s corporations are considering migrating as far afield as Southeast Asia, others prefer to move closer to home bases. The island’s administration — sensing an opportunity — is cobbling together incentives such as tax holidays to entice their corporate citizens back into the fold.

“The fastest way is to add capacity in existing facilities. Looking for new land and building new facilities elsewhere will be too slow,” Elton Yang, chief financial officer of Taoyuan-based Quanta, told reporters on Nov. 13.

To be sure, Taoyuan has always been pro-business. Steady lobbying and the proliferation of over 30 industrial parks helped produce spectacular results: its industrial output was estimated at close to $100 billion last year, outstripping even Taiwan Semiconductor Manufacturing Co. Ltd.’s base of Hsinchu to the south.

The moves to Taoyuan defy a historical trend throughout the industrial era, which has seen manufacturing gravitate toward the lowest labor costs. The minimum monthly wage in Taiwan is about NT$22,000 ($713), which is more than double the 2,410 yuan ($347) a worker in Shanghai can expect.

Taoyuan’s courtship of manufacturers has accelerated this year amid the saber-rattling. The city has teamed up with real estate agents to help companies locate land, which has gotten progressively pricier. According to Savills Taiwan, costs for industrial land in certain locales have swelled as much as 75% from 2014. In the year to September 2018, there were 30% more companies asking for the government’s help in securing land compared with a year earlier, city officials say.

“Taoyuan is now the top choice for Taiwanese companies coming home,” Mayor Cheng Wen-tsan, of Taiwan’s ruling pro-independence Democratic Progressive Party, said at an event to mark an investment there on Nov. 5. “Out of 10 looking to return, four or five say Taoyuan is their first choice.”

Taoyuan topped all cities in transactions for industrial land and factories from January to September, according to Taiwanese real estate company, Sinyi. Those deals totaled NT$12.65 billion out of NT$29.02 billion transacted by all the island’s listed companies. Companies favor Taoyuan partly because Hsinchu is seeing a worse land shortage and sets a higher threshold when screening companies, Sinyi manager Michael Wang said.

Even foreign companies have taken notice. San Jose-based Super Micro Computer Inc. is expanding server production capacity in Taoyuan, and proceeding with a separate plan to build a new facility that will take its investment in the city to NT$9 billion, city officials say.

“It is cheaper than Taipei. With various types of industrial parks, Taoyuan is also easier for companies to build their operations in than Hsinchu,” Wang said.