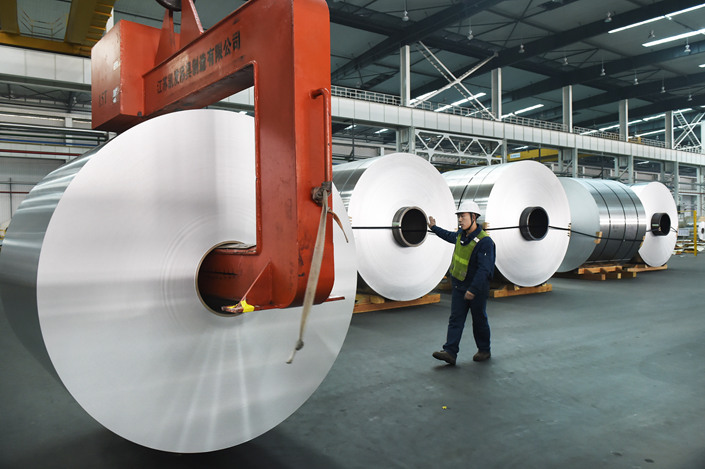 The proportion of money-losing enterprises in the aluminum industry is now close to 80%, the director of the China Nonferrous Metals Industry Association told Caixin earlier this month. Photo: VCG

The world’s biggest aluminum smelting company has been told to shut down one-tenth of its production as northern China tries to keep pollution in check while also keeping warm as the winter bites.

Shandong Weiqiao Pioneering Group Co. Ltd., the parent of aluminum giant China Hongqiao Group Ltd., has been told shut down the cells used for smelting aluminum in what would amount to the equivalent of a 650,000-metric ton reduction in output. The order came from the Binzhou city government in eastern China’s Shandong province, where the company’s operation is based, according to a document released on Monday.

It comes as northern China tries to contain the rise in air pollution that comes about as part of the ‘winter heating’ season that started earlier this month, when power plants were fired up across the country’s north to heat homes and offices.

Despite calls to limit industrial production, Beijing saw its worst air pollution in 18 months on Monday, with the concentration of hazardous PM2.5 particles reaching 328 on the U.S. Embassy’s air quality index, a reading that falls into the ‘hazardous’ band, the most severe. Similarly heavy pollution was reported across the north of the country.

Binzhou’s move to limit Hongqiao’s production appears to be a response to the provincial government’s approval of a document (link in Chinese) forbidding a “one-size-fits-all” policy toward pollution reduction and insisting that higher polluting industries bear the brunt of cuts during the winter months. The central government has nevertheless been criticized for giving local authorities too much leeway in setting anti-pollution goals, which have been watered down compared with last year in what appears to be a response to a slowdown in economic growth.

The order also comes amid a drop in aluminum prices across the industry, with the Ministry of Industry and Information Technology revealing earlier this month that the domestic industry’s profit fell 45.2% year-on-year to 25.59 billion yuan ($3.69 billion) from January to September. The proportion of money-losing enterprises in the industry is now close to 80%, the director of the China Nonferrous Metals Industry Association told Caixin earlier this month.

Speaking of the industry’s prospects, Ao Hong, deputy general manager of Aluminum Corp. of China, or Chinalco, told Bloomberg earlier this month that, “We’re under huge pressure, so the company has to accelerate reform and cut costs internally.” While Chinalco’s businesses remain profitable, many smaller firms are losing money at current prices, he said.