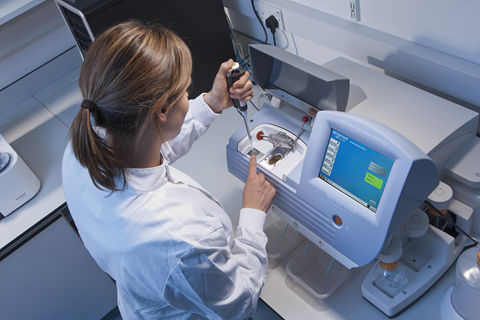 As the birth of the world’s first genetically altered babies in China creates international controversy over science and ethics, the country is embracing a booming development of genetics industrial parks.

He Jiankui, the Chinese scientist who claims to have altered the genes of the twin babies’ embryos to make them resistant to HIV, said he funded most of his research using his salary as a college professor. But his lab is based in Shenzhen, a southern city that is home to two of China’s biggest genetics industrial parks.

China has invested heavily in genetics technology as the country attempts to dominate the nascent industry. In 2016, China announced a multi-billion dollar project to sequence the genomes of millions of citizens over 15 years. Now China already surpasses the U.S. in large-scale, low-cost gene-sequencing.

Other genetics industrial parks are planned or have started construction in Guangdong, Anhui, Fujian and Jiangsu provinces. A health-themed property project is underway in the eastern city of Suzhou.

With an investment of 780 million yuan ($112 million) for phase one, Shenzhen’s China National GeneBank is the first national genetics industrial park. The park was jointly financed by the government and BGI Group, a leading genetic testing company based in Shenzhen.

BGI wasn’t directly involved in He’s research, but Chinese media reported that an executive at several subsidiaries of BGI also serves as a supervisor at a company He founded.

Another investment project by BGI has recently raised concerns of bribery and land hoarding. In June, a Nanjing-based company that was in a dispute with BGI on gene storage collaboration accused BGI of obtaining land by bribing government officials. The accuser said the land was used to develop a health-themed property project in the eastern city Suzhou.

BGI has denied the accusation, saying it didn’t participate in the development of the property project and didn’t acquire any land in the Suzhou project.

BGI Chief Executive Officer Xu Xun told Caixin that the company was invited by the Suzhou government to help build a health-themed town. BGI will mainly provide scientific research support for the overall planning of the town and the operations and management of certain industrial projects, and the company has never participated in commercial property development, Xu said.

“We don’t have the capability for commercial real estate development, and real estate will never become our main business and profit source,” Xu told Caixin.

BGI holds a 25% stake in a newly established join venture that is to be the developer of the project, tentatively named BGI Life and Health Town. Other investors include a subsidiary of China Vanke Co., the country’s largest property developer, and two state-backed companies.

BGI Life and Health Town, located in a Suzhou high tech zone, has a planned area of 2 square kilometers, including a medical health industrial park, retail and office buildings, and residential complexes. The town will create a world-leading genetics technology development and application demonstration base for China, according to its promotion materials.

A genetics industrial park in Guangdong province is Guangzhou International Biotech Island, with a total investment of 3.7 billion yuan. The park opened in 2011 and has since attracted more than 100 biotech companies, including Taiwan-based Health GeneTech Corp.

Shenzhen is also building another genetics industrial park twice as big as the China National GeneBank. This park is financed by CheerLand Investment Group, with a total investment of 2.9 billion yuan.