As Price of ‘Black Gold’ Rises, Times Are Tough in ‘Wig City’

By Chen Liang and Michael Wijnen 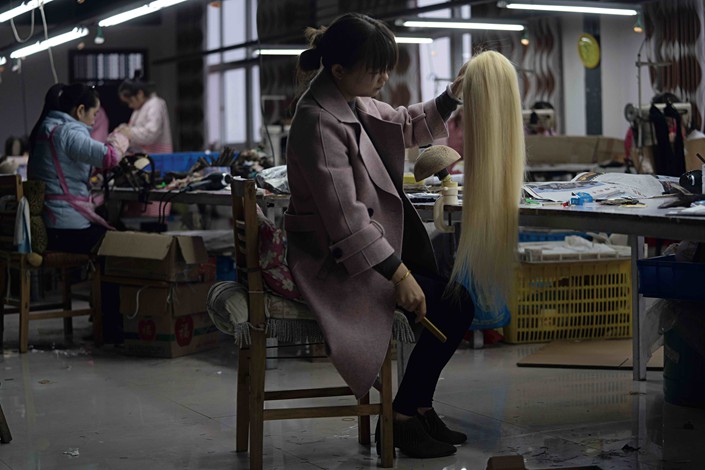 After tens of thousands of crochets, the initial stage of this wig is completed on Nov. 6. After some further changes to its form, dying and some finalising treatments, this wig made from the black hair of a Chinese person will be sent to its buyer in the U.S. Photo: Chen Liang/Caixin

Wigs are a valuable global commodity: more than $3 billion worth of them were exported from China in 2017. The Henan province city of Xuchang plays an outsized role in this market. Employing nearly 300,000 people, its wig industry has earned Xuchang the name “wig city.”

Last century, vendors roamed China’s streets looking to buy hair that could be made into wigs and sold. Attempts to artificially recreate the desired characteristics of human hair have thus far proven too challenging, so the industry still relies on human sources. But the long, black plaits that used to be so common in China and that were well suited to being made into wigs are becoming harder and harder to find. Modern hair styles and treatments that are proliferating in cities often render hair unsuitable for being made into wigs. And the number of people living outside of cities is falling. This has dramatically increased the price of hair, or as it has become known in China “black gold.” In the mid-1980s, 10-inch long hair for wigs sold for between 60 yuan ($8.60) and 70 yuan per kilo. Now it sells for more than 1,000 yuan per kilo.

It’s currently a challenging time to be in the wig industry. The process of making a wig is highly labor intensive, meaning that rising wages have combined with the rising cost of hair to drive up expenses. At the same time, turbulent international conditions have affected demand in this export-facing industry. The Xuchang-based company Rebecca Hair Products is a case in point. From 2010 to 2017, its revenue stagnated at around 2 billion yuan. Its share price plummeted in June. After the Shanghai-listed company disclosed its third quarter earnings on Oct. 31, its share price fell to 2.46 yuan, the lowest in years.

Chinese wig-makers are not entirely out of options though. In the face of rising costs in China, many are looking abroad. Southeast Asia, India, Pakistan and Bangladesh are becoming popular choices to source hair, while North Korea, Vietnam and Cambodia are starting to perform the most labor-intensive parts of production, before the wigs are sent to China for completion.

The disruptive force of e-commerce is providing this struggling industry with another potential lifeline.

Yu Yang, a representative with Alibaba international service’s Xuchang office, said that South Korean firms previously dominated the core export markets of the U.S. and the EU. But that is changing as these markets move online, providing a big opportunity for Rebecca Hair Products and its peers in Xuchang.