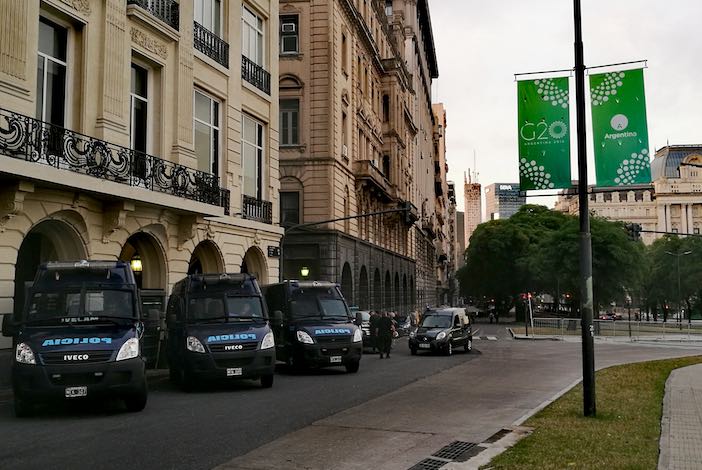 Buenos Aires was locked down in advance of the G-20 summit, which begins Friday.Photo: Caixin

(Buenos Aires) — As the world’s most powerful leaders fly into Buenos Aires, the capital city of Argentina is in the final countdown for the Group of 20 summit starting Friday.

The annual summit has always been a highlighted event on the agendas of politicians, scholars, business chiefs and media as it brings together leaders of the world’s 20 leading industrialized and emerging economies to discuss the most important global issues.

But this year’s event draws particular attention. It comes as the international community faces unprecedented challenges to reaching consensuses on front-burner issues such as climate change. At the same time, the multilateral trading system is at unprecedented risk.

The rising trade frictions and divergent positions on climate change are among the thorniest issues on this year’s agenda. The World Trade Organization (WTO) reported that G-20 countries applied 40 new restrictive measures covering around $481 billion of annual trade between mid-May and mid-October this year. The new restrictions were the largest since the WTO started monitoring G-20 trade in 2012, the WTO found.

At the center of mounting global trade tensions are the U.S. and China, which have imposed tariffs on more than half of the imports from each other in recent months.

A planned meeting during the summit between President Donald Trump and President Xi Jinping may turn out to be a key opportunity for the world’s two largest economies to agree on a truce as the trade war takes a toll on the global economy.

Before his departure for the summit, Trump told reporters on Thursday he is “close” to doing something on trade with China.

As Buenos Aires completes final preparations and prepares to shut down part of the city for the event, here are five things to know about the G-20 summit.

Started in 1999 as a meeting of finance ministers and central bank governors from the Group of 7 major economies, the G-20 evolved in 2008 into a more-inclusive discussion platform of top leaders from leading economies as countries sought to coordinate efforts to tackle the Global Financial Crisis. The first summit of G-20 leaders was held in Washington following the 2008 collapse of Lehman Brothers Holdings Inc.

In the run-up to each year’s summit, dozens of meetings are held. The work of the G-20 generally follows two tracks. One track is financial, involving meetings of G-20 finance ministers and central bank governors. The other, known as the “Sherpa track,” focuses on broader issues such as political engagement, anti-corruption, climate change and gender equality, among others

The key event each year is the leaders’ summit attended by heads of state. The leaders typically issue a joint declaration based on the policy recommendations prepared at meetings throughout the year.

Why does the event matter?

The bloc accounts for 85% of global economic output, two-thirds of the world’s population, and 75% of international trade.

Leaders have made crucial policy commitments at previous summits. In 2009, the 20 countries agreed to provide more than $1 trillion to support market liquidity amid the financial crisis.

But achieving agreement on a communiqué to be released after this year’s summit is expected to be a tough task following the collapse of talks at a meeting of the Asia-Pacific Economic Cooperation (APEC) group in Papua New Guinea because of disagreements between China and the U.S.

A German government official said the negotiations on a final communiqué this year are “very, very difficult,” Reuters reported Thursday.

What are the key issues at this year’s summit?

Themed “building consensus for a fair and sustainable development,” this year’s G-20 summit focuses on global economy, trade, the future of labor markets, infrastructure and development, and gender-equality issues.

Special focus is on the trade tensions between China and the U.S. Xi and Trump will meet on Saturday night for the first time since the two countries became locked in a deepening trade war. Washington has imposed tariffs on $250 billion of annual Chinese imports since July, and China has retaliated with its own measures.

Relations have becoming increasingly hostile and included a sharp exchange of words at the recent APEC summit. China and the U.S. both have a great deal to lose if the trade war continues, said David Kelly, chief global strategist of J.P. Morgan Asset Management. While the trade frictions have taken a toll on China’s already cooling economy, the U.S. is also probably more vulnerable to an intensified trade war than many recognize, Kelly said.

Whether Trump and Xi can reach some kind of cease-fire agreement over the dining table in Buenos Aires on Saturday night is being closely watched. The Trump administration is scheduled to increase tariffs to 25% from 10% on $200 billion of Chinese products on Jan.1.

“I think we’re very close to doing something with China, but I don’t know that I want to do it,” Trump told reporters Thursday. “Because what we have right now is billions and billions of dollars coming into the United States in the form of tariffs or taxes, so I really don’t know.”

What to watch at the summit?

Climate change is another thorny issue after Trump last year announced he would withdraw the U.S. from the Paris climate accord.

Saudi Arabian Crown Prince Mohammed bin Salman has also stirred controversy for attending the summit following a global public outcry over his alleged links to the murder of journalist Jamal Khashoggi in October in Istanbul. The crown prince may meet Turkish President Recep Tayyip Erdogan for the first time during the summit. Russian President Vladimir Putin is also expected to meet with the crown prince.

A meeting of leaders of the BRICS countries ― Brazil, Russia, India, China and South Africa ― will also be held on the sidelines of the summit.

On Thursday, Trump abruptly announced that he canceled an expected meeting with Putin at the G-20 summit, citing the failure of Russia to return a ship and sailors seized from Ukraine.

On Friday, the leaders of Canada, the United States and Mexico are supposed to sign the United States-Mexico-Canada Agreement, a revised trade pact between the three countries that will replace the North American Free Trade Agreement.

Who else is attending the summit?

Non-member countries also attend. For example, Spain is a permanently invited guest. Every year the nation holding the G-20 presidency invites other countries to attend. This year’s host country, Argentina, has invited Chile and the Netherlands.