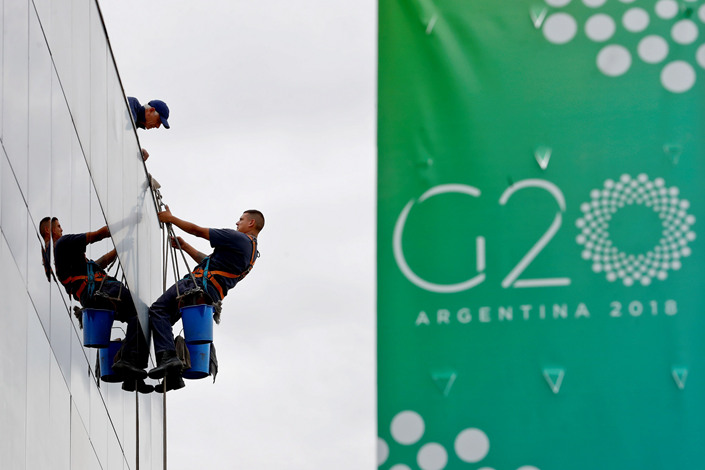 * Some hope for revival of “great chemistry” Trump claimed he enjoyed with Xi when Trump visited Beijing in 2017, but neither side offers much reason for optimism

(Beijing) — The world’s most powerful leaders meet in Argentina this weekend at the annual Group of 20 (G-20) summit, an event overflowing with lengthy agendas, weighty issues and photo-ops — but the most important discussion might be at a private dinner party on Saturday evening.

President Xi Jinping and U.S. President Donald Trump will sit down over some food on Dec. 1 in a meeting that could help de-escalate the trade tensions between the world’s two biggest economies and prevent the spat from damaging global growth prospects even more.

But this bitter trans-Pacific relationship is emblematic of broader dissatisfaction with the international order. China, the EU and other countries are pushing for reforms to global trade rules, and the G-20 is an opportunity to forge some consensuses. And the summit will be a litmus test for multilateralism as a whole, after the failure of the Asia-Pacific Economic Cooperation (APEC) summit earlier in November to issue a joint communique.

Some knotty issues await the two leaders’ attention as they eat their meal in Buenos Aires. Among those issues are China’s huge trade surplus with the U.S., its alleged forced technology transfers from U.S. companies, market access policies and industrial subsidies programs.

Xi and Trump have not met in person for over a year. When Trump tweeted in early November that they had enjoyed a “very good” phone call, markets spiked. The success, or failure, of their dinner date will be closely watched, and some hope the meal could rekindle some of the “great chemistry” Trump claimed he enjoyed with his counterpart when he visited Beijing in 2017.

But while high-level communication has improved since the phone call, neither side has offered much concrete reason for optimism. Trump told The Wall Street Journal on Monday that it is “highly unlikely” he will postpone tariff hikes, and if no deal is reached, he will also impose more tariffs, of either 10% or 25%, on the remaining $267 billion of annual U.S. trade with China. Last week the White House accused Beijing of continuing to support forced technology transfers, corporate espionage and cybercrime.

“We cannot accept that one side would put forward a number of demands and the other side just has to satisfy all these things,” Cui Tiankai, China’s ambassador to the U.S., told Reuters earlier this week. “Honestly, so far I have not seen sufficient response from the U.S. side to our concerns.”

“President Xi can step up and come up with some new ideas for us,” suggested Larry Kudlow, Trump’s top economic adviser, when he told the media of the leaders’ dinner plans. The U.S. president believes “there is a good possibility that we can make a deal,” Kudlow said later on Tuesday.

Trade tensions are already hacking away at both China’s and the world’s growth prospects. Last month, the International Monetary Fund downgraded its forecast for world growth in 2019 to 3.7% from 3.9%, and China’s to 6.2% from 6.4%.

In theory, trade disputes are supposed to be settled via the World Trade Organization (WTO), rather than punitive bilateral tariffs. So it’s unsurprising that reforming the organization is on the cards, and the G-20 summit offers an opportunity for participants to build consensuses before the WTO’s General Council meeting later in December.

The EU, China, and several other countries jointly published proposals for reforming the body’s dispute settlement processes earlier this week. The U.S. has not given its support for those proposals so far. As well as threatening to pull the U.S. out of the WTO, Trump has also refused to endorse new judges for the its highest court, paralyzing the body’s authority. A senior Trump adviser also suggested last week that China be thrown out of the organization.

The EU said WTO rules should be adapted to be able to deal with challenges like industrial subsidies, forced technology transfers and other market-distorting policies. China has also argued that developing countries have a bigger voice during reforms.

A litmus test for multilateralism

The G-20’s leaders began holding summits in 2008, calling on a spirit of collective action in trying to deal with the global financial crisis. Ten years later, this multilateral enthusiasm is fading fast, in large part due to suspicion from the Trump administration.

At last year’s G-20 summit in Munich, the U.S. pulled out of the Paris Agreement on reducing greenhouse gas emissions. “We take note of the decision of the United States of America,” said the joint statement, rather stiffly.

But the 21 countries who attended the APEC summit earlier in November failed even to produce any joint communiqué, with the U.S. and China blaming each other for the deadlock. “It seemed like the U.S. attended this APEC meeting with great anger,” a Chinese spokesman said.

In some ways, APEC’s failure has set a very low bar for the G-20 to be called a relative success — it might just need to hash out something everyone can agree on before they all go home.