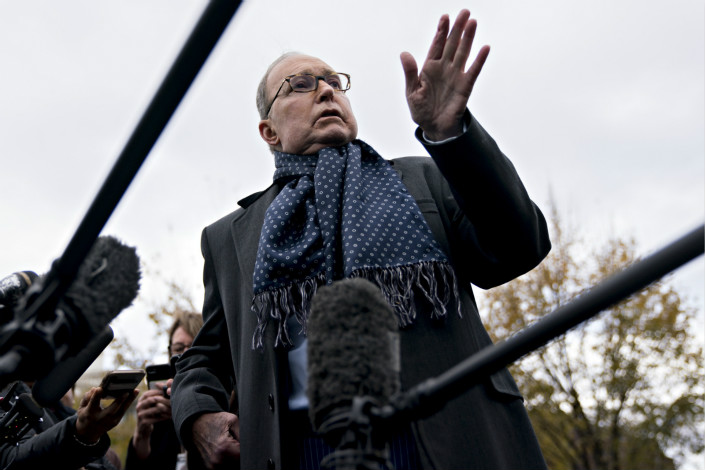 Trump is hopeful for a breakthrough with Xi but is ready to impose more tariffs if the upcoming talks don’t yield progress, Larry Kudlow, Trump’s top economic adviser, told reporters Tuesday during a briefing ahead of the Group of 20 meeting in Argentina.

The president believes “there is a good possibility that we can make a deal” and he “is open to it,” Kudlow said later Tuesday.

Washington and Beijing remain at odds on key issues such as U.S. accusations of intellectual property theft and forced technology transfer, he said.

“As you can imagine this is a big deal, this meeting — the stakes are very high,” Kudlow said. “It’s an opportunity to turn a new page, break through. President Xi can step up and come up with some new ideas for us.”

The dinner with Xi is scheduled as one of the last events on Trump’s itinerary there before he returns to Washington, Kudlow said. He declined to say what other U.S. officials will join Trump in the session.

China had not confirmed the meeting as of Tuesday evening.

If the two sides fail to reach a deal, Trump said he will also impose tariffs of either 10% or 25% on the remaining $267 billion in annual U.S. trade with China.

Trump surprised his aides earlier this month with a call to Xi to restart the stalled negotiations. Since then, communications have picked up between the two sides, said Kudlow.

“I don’t want to go overboard, but he’s indicated some optimism. We have an opportunity to extend that optimism, break some new ground,” Kudlow said. “So we’ll see.”

When asked whether Trump would meet with the embattled Saudi Crown Prince Mohammed Bin Salman, Bolton responded that Trump’s schedule is “full to overflowing at this point.”

But, Sanders later added, “I wouldn’t say that we’ve ruled out any interaction.”