Opinion: Tempering Expectations Ahead of the G-20 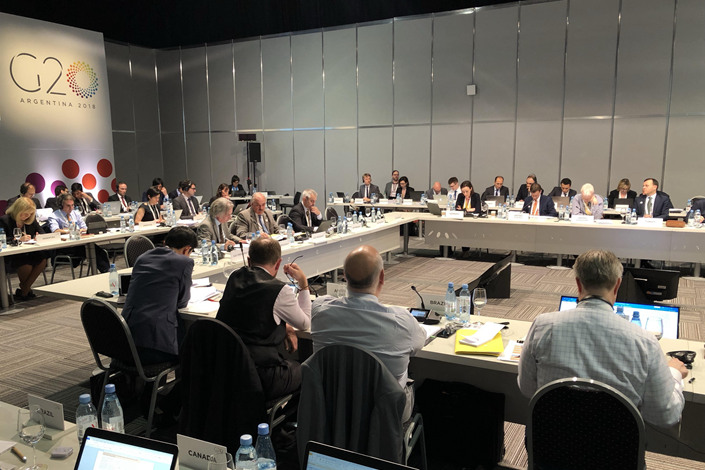 The chief negotiators of the G-20 countries, known as "sherpas," at a G-20 meeting in Buenos Aires, Argentina on Nov. 26. Photo: IC

Earlier this month, President Donald Trump tweeted that he had a “long and very good conversation” with President Xi Jinping over the phone. However Trump’s positive rhetoric contrasts sharply with the current reality of the U.S.-China relationship. In the midst of increasingly competitive and near-confrontational relations, it is important to remain clear-eyed about the difficulties that the U.S. and China face going forward.

The hurdles the two leaders must overcome to prevent a further downward spiral in the trade, economic, and security relationships are substantial. It is difficult to decipher whether or not real progress is being made when the relationship is managed mainly in meetings or calls between the two leaders. Exchanges at the head of state level can act as temporary stabilizing forces, but one meeting is not likely to resolve all the issues on the agenda. Trump may have “great respect for President Xi,” but he and his administration believe “China has taken advantage of the United States for many, many years,” pointing toward a far more contentious future for the bilateral relationship.

Vice President Pence has become a leading voice relaying broader U.S. concerns over China. Pence’s speech at the Hudson Institute first highlighted the breadth of U.S. grievances against Beijing. His remarks to and engagement with Chinese counterparts — including Xi — during his recent trip to Asia reinforced these sentiments. In an interview with the Washington Post just prior to his arrival in Singapore for the U.S.-ASEAN Summit, Pence expanded the list of U.S. conditions for any deal between Washington and Beijing to include issues outside of the economic relationship, such as interference in the politics of Western countries and respect for international rules and norms.

U.S. tariffs on Beijing now total $250 billion. It is possible that in the coming months the U.S. will levy new tariffs on all Chinese imports. Trump has threatened to do so himself, saying, “I have $267 billion waiting to go if we can’t make a deal.” In addition to lowering the trade deficit, the tariffs are meant to address U.S. concerns raised in the Section 301 investigation that concluded China’s policies on intellectual property, innovation, and technology are unfair and harmful to U.S. interests.

It is difficult to imagine the removal of the current set of tariffs anytime soon. Softness in equity markets might persuade Trump to use his G-20 meeting with Xi to cool tensions and try to generate gains for the U.S. stock market. This would likely come in the form of extending the decision date or canceling the scheduled rise of $200 billion in tariffs from 10% to 25% on Jan. 1. Trump could also agree to not impose a further $267 billion in tariffs. Any agreement that might see either of the above pullbacks would serve as a short-term stabilizer and could elicit minor concessions from Beijing. However, it would not indicate real progress toward resolving structural issues. It would also contradict U.S. petitions that Beijing adhere to the targets it announced at the Third Plenum in 2013, notably allowing the market to be the decisive factor in allocating resources.

It is difficult to imagine Trump will seriously consider the removal of any current tariffs unless Beijing shows it is willing to take real actions that immediately address U.S. accusations in the Section 301 report. In a speech at CSIS earlier this month, White House trade advisor Peter Navarro argued that for Trump, “economic security is national security.” China’s violations, including forced technology transfer, preferential and unfair licensing requirements, and intellectual property and cyber-theft make up a large part of these economic and security concerns. These actions are meant to vault China ahead of the U.S. in key industries, many of which fall under Beijing’s controversial Made in China 2025 plan.

The Trump administration has given Beijing a list of more than 100 demands, but U.S. officials have indicated the Chinese side has yet to provide a sufficient response. Furthermore, just ten days before Trump and Xi’s G-20 meeting, U.S. Trade Representative Lighthizer released an updated report on the 301 investigation stressing the lack of progress on technology transfer and intellectual property issues. As Lighthizer said in a statement following its release, “This update shows that China has not fundamentally altered its unfair, unreasonable, and market-distorting practices.”

The administration is now taking steps that will allow for a more robust U.S. response to Chinese transgressions. Earlier this year the U.S. Department of Commerce demonstrated the strength of U.S. export and investment controls when it effectively shuttered ZTE for violating sanctions on North Korea. While Trump quickly reversed that decision following discussions with Xi, the Department of Commerce now has new grounds to implement similar restrictions based on national security concerns, giving it a much broader purview to create these types of export controls.

In October, Fujian Jinhua Integrated Circuit Co. Ltd. became one of the first targets of this more aggressive response. In concert with the Department of Commerce, the Justice Department also unveiled charges against Jinhua for economic espionage and filed a civil action. These represent an escalation in U.S. attempts to curb Chinese technology transfers, clearing the way for a more comprehensive U.S. crackdown.

Bilateral economic tensions are mirrored by growing tensions in the regional economic and security relationship. Secretary Pompeo’s remarks on “America's Indo-Pacific Economic Vision” at the Indo-Pacific Business Forum in July, the first substantive articulation of the U.S. vision and policies in the region, were riddled with criticisms of Beijing’s international engagement through its Belt and Road Initiative. Vice President Pence’s speech during the APEC CEO Summit and ASEAN Regional Forum cemented U.S. opposition to the initiative. Pushing back on Chinese influence and economic investment in the region, he criticized China’s Belt and Road Initiative and said the U.S. does not offer a “constricting belt or a one-way road."

The close encounter between the USS Decatur and a Chinese warship in the South China Sea this past October also highlighted the possibility of an inadvertent clash between the two navies in a contentious region. This took place despite efforts to strengthen bilateral military cooperation. Just a year ago the U.S. and China were closely coordinating on the maximum pressure campaign against North Korea. Today they are increasingly divided. Beijing has voiced the need to reduce pressure while the U.S. is adamant sanctions should remain. Outcomes from the most recent Diplomatic and Security Dialogue confirmed that even when it comes to security matters, disagreements over issues of sovereignty, freedom of navigation, and the Korean Peninsula will be difficult to resolve in the near future.

As we approach the G-20, hopes of a trade deal will only grow. It is no surprise that discussions between Treasury Secretary Mnuchin and his counterpart Liu He have resumed and that U.S. and Chinese trade negotiators will now meet at the G-20. However, trade is only one aspect of the broader bilateral economic relationship. U.S. policymakers are signaling their impatience and frustration with China’s unfulfilled promises. One meeting on the margins of the G-20 will not be enough for Trump and Xi to come to a broad-based resolution for such a complex set of issues.

A limited, yet meaningful agreement would be preferable than an overambitious and meaningless one. Trump and Xi should capitalize on their discussions to create a less contentious atmosphere in the bilateral relationship and establish realistic markers of progress. President Trump should clearly identify and empower those below him to carry out his agenda. It should be made clear to Chinese officials with whom they can coordinate on issues of trade going forward. Trump would also benefit from recognizing that a continuation of the current contentious atmosphere may impede negotiations rather than advance them.

For Xi’s part, he should recognize that across the U.S. there is a consensus on the need to develop a new framework for the bilateral relationship. To prevent the dial moving from competitive to confrontational, U.S. policymakers will be looking for clear signs that Beijing acknowledges its own role in getting the relationship to where it is today. To accomplish this, Beijing must agree to a practical and realistic framework that addresses structural issues in an expedited and urgent manner.

Any agreement should be distinctly different from past U.S.-China deals in that it must address the need for urgent adjustments to structural inequalities in the relationship. An agreement that simply results in the purchase of more U.S. products from China or promises vague commitments with unclear timelines will only serve to kick the can down the road, and would most likely further harm the state of the relationship for years to come.

Lucas Tcheyan is a research analyst at the Carnegie–Tsinghua Center for Global Policy.