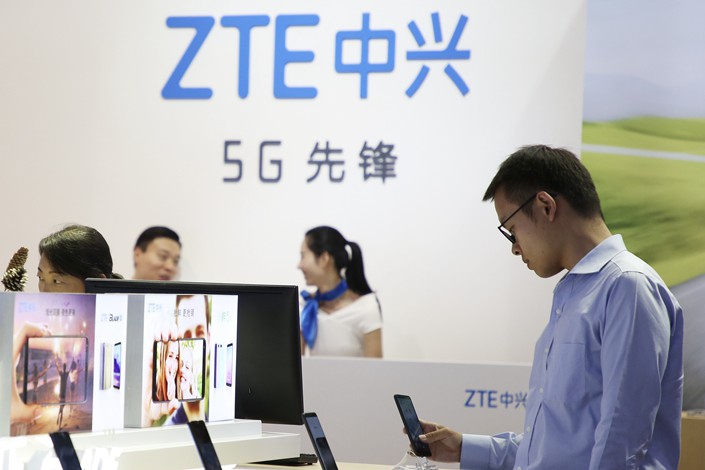 * ZTE said it returned to profitability in the third quarter, after reporting a massive 2.4 billion yuan ($345 million) loss in the previous quarter

(Beijing) — Shares of ZTE Corp. sagged on Friday after the embattled telecom-equipment maker said it expects to post a slow recovery from a high-profile dispute with Washington that nearly put it out of business.

ZTE’s Hong Kong-listed shares fell 1.97%, while its Shenzhen-listed shares fell by a milder 1.09%. The Hong Kong shares now trade at less than half their levels from April when the dispute with Washington broke out, while the Shenzhen shares are down about 45% from levels at that time.

The high-profile dispute that captured global headlines saw Washington determine that ZTE violated an agreement punishing it for selling American-made products to Iran in violation of U.S. sanctions against the country at that time. Washington cut off ZTE from its U.S. suppliers after that finding, forcing the company to suspend most operations for two months before the two sides reached a new deal to lift that ban.

In its latest quarterly report issued on Thursday after markets closed, ZTE said it returned to profitability in the third quarter, after reporting a massive 2.4 billion yuan ($345 million) loss in the previous quarter at the height of its run-in with Washington. But the company’s third-quarter profit of 564 million yuan before extraordinary items was down 65% from the previous year, according to its latest earnings announcement.

The company’s third-quarter revenue fell by a milder 14% to 19.3 billion yuan, rebounding from a much-steeper 58% decline in the previous quarter.

The company blamed a $1 billion fine that was part of its settlement with Washington for the full-year loss, and said its suspension of most operations at the height of the clash was another major factor. It did not comment on the fourth-quarter performance.

Since the settlement, which included a change in all of the company’s top management, ZTE has made several moves to raise cash and bolster its position. In September it announced it was selling land and property assets for at least 2.2 billion yuan to cope with its liquidity crisis. That same month, it announced terms for the sale of a 43.7% stake in its software development unit ZTEsoft Technology Co. Ltd., though that deal had originally be announced before the crisis.

Earlier this month ZTE also received a setback when a U.S. court extended the term of a court-appointed compliance monitor at the company from 2020 to 2022.