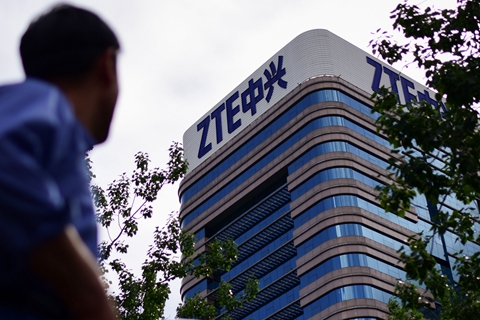 ZTE was slapped with a $1.4 billion fine by U.S. authorities to end a crippling business ban. Photo: VCG

ZTE Corp., the Chinese technology giant that survived a crippling U.S. business ban, is stepping up efforts to unload assets to ease a liquidity crunch following the payment of $1.4 billion in U.S. penalties.

Nanjing Xiruan Corporate Management Limited Partnership will pay 1.2 billion yuan ($175 million) for a 43.7% stake in the software development unit ZTEsoft Technology Co. Ltd. and will invest an additional 100 million yuan in ZTEsoft, ZTE said Wednesday in a filing. Nanjing Xiruan will make the payment in installments.

ZTE first disclosed a planned deal with Nanjing Xiruan in February. The buyer is backed by e-commerce tycoon Jack Ma, the founder of Alibaba Group Holding Ltd. According to the announcement at that time, Nanjing Xiruan originally agreed to make one-time payment for the stake.

After the transactions, Nanjing Xiruan will be the largest shareholder of ZTEsoft with 45.6%, while ZTE’s holding will be reduced from 80.1% to 35.2%. ZTEsoft will subsequently be removed from ZTE’s financial books. The stake transfer values the company at 2.8 billion yuan.

ZTE has accelerated asset divestitures after it agreed to the $1.4 billion fine in return for a reversal by U.S. regulators of a seven-year ban on doing business with American suppliers. The ban, imposed in April, cited ZTE’s violations of U.S. sanction rules. It forced ZTE to halt its main business operations for months until Washington reached a new deal including the fine and a management overhaul.

Established in 2003, ZTEsoft provides supportive services for telecom network operation and software development for AI-powered transportation and urban management services. At the time it first reported the planned stake transfer to Nanjing Xiruan – months before the U.S. business ban – ZTE was moving to divest non-core assets to focus on the telecom equipment business.

ZTEsoft was listed in 2016 on the National Equities Exchange and Quotations (NEEQ) board, China’s over-the-counter-style board, but was delisted in December 2017 before the proposed stake sale. ZTEsoft booked 1.52 billion yuan of revenue with a net loss of 82 million yuan by the end of November 2017, a company financial report showed.

The purchase of ZTEsoft followed a series of recent investments in the telecom sector by Alibaba, including stakes in telecom carrier China Unicom and mobile telecom infrastructure operator China Tower Corp. Ltd.