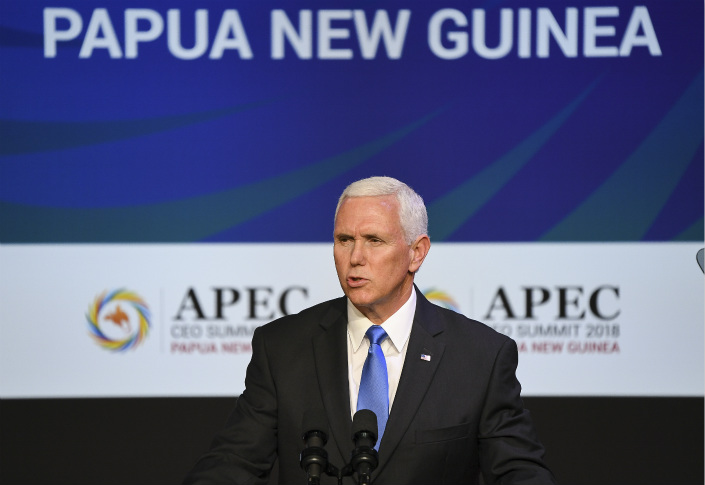 Chinese and U.S. leaders lashed out at each other at an Asian summit on Saturday, with President Xi Jinping accusing the U.S. of “going against history” by imposing trade barriers, while U.S. Vice President Mike Pence criticized China for saddling developing countries with debt-ridden infrastructure projects they cannot afford.

Speaking in the Papua New Guinean capital of Port Moresby at an Asia Pacific Economic Co-operation (APEC) summit, Xi said that in an era of globalization, using man-made barriers to obstruct close ties between countries runs against economic logic and historical trends.

“It’s short-sighted and will not succeed,” Xi said. “[A country that chooses] Self-isolation will not only lose the world, but itself.”

Xi also slammed the U.S., though implicitly, for trying to force all countries to follow rules it sets. “The rules should be jointly set by the international community, not whoever has bigger arms and strength,” Xi said.

One of Xi’s missions at the APEC summit was to continue promoting China’s Belt and Road Initiative, a project aimed at improving trading routes connecting Asia, Europe and Africa, which began in 2013.

Xi held a private meeting with the leaders of Pacific island nations on Friday, proposing greater cooperation in trade, investment, agriculture and tourism. The U.S. could not wait to take aim at Xi’s diplomatic efforts.

U.S. Vice President Mike Pence, who spoke later at the summit, said the U.S. offers countries in the region “a better option” for economic and diplomatic relations.

“Do not accept foreign debt that could compromise your sovereignty,” Pence said Saturday during a speech to the APEC CEO summit, according to prepared remarks.

“We don’t drown our partners in a sea of debt,” he said. “We don’t coerce, corrupt, or compromise your independence. The United States deals openly and fairly – and we don’t offer a constricting belt or a one-way road.”

The implicit reference to Xi’s Belt and Road Initiative came as Pence neared the end of his week-long swing through Asia, with his aides characterizing Saturday’s speech as the capstone of the trip. Pence is representing Donald Trump at the summits, after the president opted not to attend -- becoming the first U.S. head of state to skip the marquee Asian conferences since 2013.

Pence said the U.S. will partner with Papua New Guinea and Australia on a joint maritime initiative at Lombrum Naval Base on Manus Island.

Pence also made clear the U.S. will continue to challenge China’s claim to control of the South China Sea.

“We will continue to fly and sail wherever international law allows and our national interests demand,” he said. “Harassment will only strengthen our resolve.”

Xi earlier took several jabs at Trump’s approach to foreign policy and trade. The Chinese leader said that globalization under a rules-based international order would protect global growth, while isolation and protectionism would cause more problems. He warned against confrontation in the form of a trade war or Cold War.

Xi also defended the Belt and Road Initiative, saying it “is not a trap as some people have labeled it.”

“It has no geopolitical purpose, nor is it against anyone or does it exclude anyone, as the door will not be closed to create a small circle [of participants],” China’s official broadcaster CCTV quoted Xi as saying.

Xi and Trump are set to meet in two weeks during the G-20 summit in Buenos Aires, a high-stakes face-to-face opportunity for the U.S. and China to try to make progress in settling their escalating trade war.

Pence sought to reassure countries he said are concerned that the dispute “will hurt the region economically.” The U.S. was working to improve relations with Beijing, he said, pointing to Trump’s upcoming meeting with Xi as an opportunity for progress.

“We believe that progress could be made between our two nations, even as the United States remains in a strong position,” Pence said.

During his speech, Pence also announced a few new initiatives aimed at showing U.S. commitment to the region.

He announced the Indo-Pacific Transparency Initiative, a program promoting good government that would be backed by $400 million in U.S. funding. He also highlighted Exxon Mobil’s investment in Papua New Guinea and said he would make an announcement on Sunday about a “historic initiative that will transform Papua New Guinea’s future.”