By Charlotte Yang and Han Wei 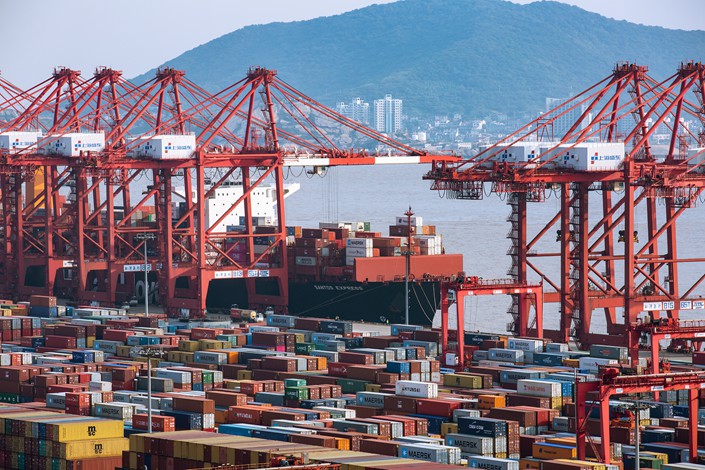 China and the U.S. have imposed tariffs on half the annual imports from each other since July. Photo: VCG

China and the United States resumed talks over trade disputes after months of stalemate, the Chinese commerce ministry confirmed Thursday.

“Teams from both sides are maintaining close contact to implement the consensus reached by the two heads of state,” Gao said.

Trade talks between the world’s two largest economies have been deadlocked for the past few months. Since July, China and the U.S. have imposed tariffs on half the annual imports from each other, followed by heated rhetoric and saber rattling in the South China Sea.

But expectations for the two countries to break the impasse rose after the Nov. 1 telephone discussion during which Xi and Trump had “a long and very good conversation” about trade, according to a Trump tweet.

More bilateral contacts emerged in the following weeks. On Nov. 9, Xi met former U.S. Secretary of State Henry Kissinger in Beijing and said China wants to resolve disputes through dialogue. Xi said he expected to have an “in-depth exchange of views” with Trump in Argentina, where the two leaders plan to meet on the sidelines of a summit later this month of the Group of 20 major world economies.

The Wall Street Journal reported that Chinese Vice Premier Liu He and U.S. Treasury Secretary Steve Mnuchin had a phone call last Friday. White House economic adviser Larry Kudlow told CNBC Tuesday that there have been “communications at all levels of the U.S. and Chinese government” to prepare for the planned meeting of presidents.

Analysts and officials said they expected that a face-to-face meeting between Xi and Trump could bring a breakthrough in the trade impasse.

“The long-term structural disagreement between the U.S. and China remains in place — however, we are now dealing with a post-midterm Trump leadership, who just lost the House, especially as Democrats were able to grab seats from agricultural states that feel the most pain from U.S.-China trade disputes,” said Feng Chucheng, co-founder of GRisk, a political risk analytics firm.

Some Chinese scholars said agriculture and energy may be where the two leaders can find consensus.

“One area where China can work on is to import more American agricultural products as well as energy commodities to help narrow America’s trade deficit,” said Song Hong, a trade economist at China’s Academy of Social Sciences.

China agreed to buy more American energy and agricultural goods to narrow the trade deficit in May, but the deal was blocked by Trump, leading to the escalation of the trade war.

A key disagreement stems from the countries’ views on China’s industrial policies, especially in high-tech sectors. While Trump argues against China’s state-led development, China sees its tech-related investments and business as being treated unfairly by the U.S., analysts said.

The Trump administration tightened scrutiny of Chinese investments, especially in technology sectors, through the Committee on Foreign Investment in the United States, a multi-agency government panel. That has led to a series of failed deals proposed by Chinese investors since last year.

“The most probable scenario will see that China and the U.S. reach some kind of preliminary framework of agreement, where the two sides can drop tariff measures and start to work things out in a more regular, productive way,” GRisk’s Feng said.

But solving the tech-related disputes won’t be easy as it involves more-complicated concerns over competition and national security, said Tu Xinquan, the executive dean of the China Institute for WTO Studies at the University of International Business and Economics in Beijing.

“My expectation is that (the trade war) can stop escalating and both sides can pause to calm down,” he said. “It will be a good thing for both if the tariffs can be reduced or scrapped. ”