Xi to Kissinger: China Wants to Resolve Disputes with U.S. 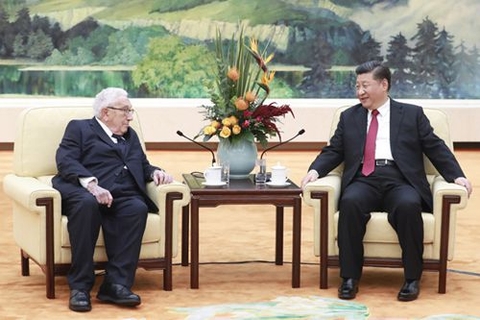 Henry Kissinger met with Chinese President Xi Jinping (right) at the at the Great Hall of the People in Beijing on Thursday. Photo: Xinhua

China wants to resolve disputes with the United States through dialogue but hopes that its choices of development paths and national interests can be respected, President Xi Jinping said during a meeting in Beijing with former U.S. Secretary of State Henry Kissinger.

The two countries should move together to jointly maintain a healthy and stable relationship, Xi told Kissinger Thursday. Xi is to meet with U.S. President Donald Trump later this month at the Group of 20 summit in Buenos Aires.

Both presidents have voiced optimism they can break the trade impasse between the world’s two biggest economies. Since July, China and the U.S. have imposed tariffs on half the annual imports from each other, followed by heated rhetoric and sabre rattling in the South China Sea.

During the meeting with Kissinger, Xi said he would have an “in-depth exchange of views” with Trump in Argentina, according to a statement published by China’s Ministry of Foreign Affairs.

Xi said China and the U.S. need to make “accurate judgments” of each other’s strategic intentions. China will stick to a path of peaceful growth and of constructively developing its relationship with the U.S. based on the principles of mutual respect and mutual benefit, the president said.

There has been a rise in negative voices on China in the U.S. that merit attention, Xi said. While China wants to resolve the problems through talks, the U.S. should respect China’s development policies and legitimate national interests, Xi said.

Kissinger said the bilateral relationship requires strategic thinking and vision. China and the U.S. should better understand each other and enhance communication to expand mutual benefits while managing disagreements.

Calling Kissinger an old friend of the Chinese people, Xi applauded the U.S. diplomat’s contribution to bilateral relations. Kissinger, 95, played a central role in the thawing of U.S.-China relations in the 1970s, famously making a secret visit to China in 1971 to negotiate the details of President Richard Nixon’s historic visit to the country the following year.

"We will not forget that," Xi said.

Before visiting Beijing, Kissinger called for adjustments by both countries to resolve the current stalemate. Speaking at the Bloomberg New Economy Forum in Singapore Tuesday, Kissinger said China must learn that the evolution of the world’s power balance “cannot be forced,” while the U.S. must understand that “not every crisis is caused by ill will.”

The two countries must agree to keep conflicts between them under control or else risk “destroying hopes for the new world order,” the former secretary of state warned.

Kissinger previously met with Wang in September in New York on the sidelines of the United Nations General Assembly. He has met with Xi multiple times since 2013.

Tensions between China and the U.S. are showing signs of easing after a telephone discussion between Xi and Trump last week. The leaders had “a long and very good conversation” about trade and the discussions were “moving along nicely” toward meetings at the G20 summit, Trump tweeted.

Officials from the U.S. and China will meet in Washington Friday for a high-level security dialogue that was postponed last month amid the tensions.