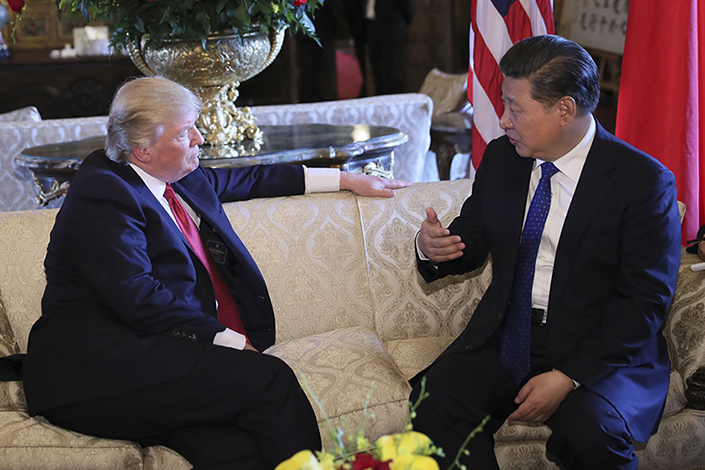 “We talked about many subjects, with a heavy emphasis on Trade,” Trump wrote on Twitter. “Those discussions are moving along nicely with meetings being scheduled at the G-20 in Argentina,” he wrote.”

Xi told Trump that the two countries should increase contact and negotiations to push for a mutually acceptable solution on trade and economic issues, according to a readout published by state media. Xi said he looks forward to meeting with Trump in Argentina.

The optimistic hint after a months-long stalemate over trade between the world’s two largest economies drove up the Dow Jones Industrial Average by more than 200 points in a morning trading. The gains held up as the Dow climbed 265 points to close at 25,380.74, up 1.06%. The S&P 500 Index rose 1.06%, and the Nasdaq Composite increased 1.75%.

Futures contract for U.S. soybeans, which are at the heart of the China-U.S. trade war, rose nearly 4% Thursday following Trump’s tweet.

Deepening trade tensions have cast shadows on equity markets in China and the U.S. China’s Shanghai and Shenzhen markets have lost nearly 30% from their January peak amid concerns over the trade war’s impact on the economy. The Nasdaq tumbled more than 9% in October, its worst monthly loss since the financial crisis.

While Trump tweeted about his talk with Xi, the White House’s top economic adviser Larry Kudlow told media that "it's possible some good positive things could — I say could — come out of President Trump-President Xi talks" in Argentina.

Analysts and officials said they expected that a face-to-face meeting between Xi and Trump at the G20 summit in Buenos Aires later this month could bring a breakthrough in the trade impasse. Talks have been stalled since August.

Also on Thursday, Chinese Premier Li Keqiang met a group of visiting U.S. politicians including Tennessee Senator Lamar Alexander. The premier told the U.S. officials that the two countries should “meet each other halfway and work together in the spirit of mutual respect and equality.”

Trump and Xi also had a “good discussion on North Korea” Thursday, the U.S. president tweeted.

Xi said China expects to see more positive progress on denuclearization and peace on the peninsula and is willing to continue playing a constructive role, according to state media.

Trade frictions between China and the U.S. have deepened since July as the Trump administration imposed tariffs on $250 billion of Chinese goods, or about half of Chinese imports last year. China struck back with retaliatory levies.

Investors are worried that the trade war would further escalate as the Trump administration threatened to levy tariffs on an additional $267 billion in Chinese goods.

Tensions have also mounted on other fronts. On Monday, the U.S. Department of Commerce said it placed the Chinese chipmaker Fujian Jinhua Integrated Circuit Co. Ltd. on a list that will effectively ban it from buying components, software and other technology from the U.S. because of national security concerns. China’s Commerce Ministry objected that the move interferes with international trade under the guise of protecting national security.

Earlier this month, U.S. Vice President Mike Pence in a speech blasted China on a wide range of issues including waging an “unprecedented effort to influence American public opinion.” The remarks raised concerns that trade frictions were shifting toward an overall strategic containment against China.