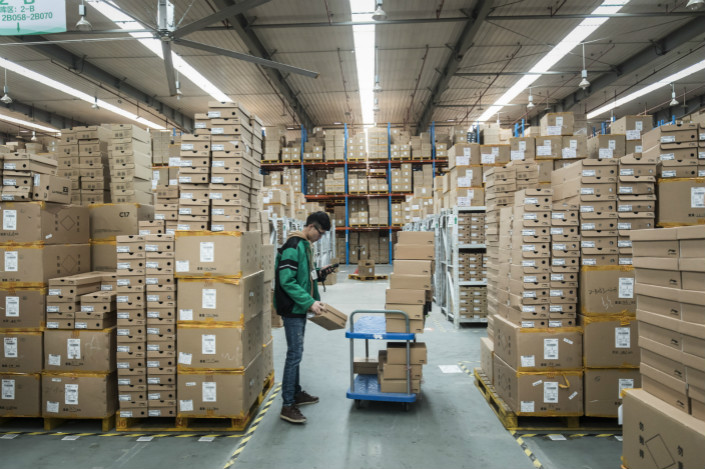 Operations at a warehouse operated by Best Inc.

(Bloomberg) — President Donald Trump said he’ll likely push forward with plans to increase tariffs on $200 billion of Chinese goods, indicating he would also slap duties on all remaining imports from the Asian nation if negotiations with China’s leader Xi Jinping fail to produce a trade deal.

Trump, in an interview with the Wall Street Journal published Monday, said he’s prepared to impose tariffs on a final batch of $267 billion of Chinese shipments if he can’t make a deal with Xi when they meet at the Group of 20 meeting in Argentina, which starts Nov. 30. The rate could be either 10% or 25%, Trump said.

Trump said that Apple Inc.’s iPhones and laptops imported from China could be hit by new tariffs. Americans could “very easily” handle a 10% duty, he said.

The only deal the U.S. will accept is for China to open up its economy to allow American companies to compete fairly, Trump said.

“The only deal would be China has to open up their country to competition from the United States,” the president said, according to the newspaper. “As far as other countries are concerned, that’s up to them.”

In September, the Trump administration plunged deeper into a trade war with China by imposing a 10% tariff on $200 billion of Chinese goods, and said the rate will rise to 25% on Jan. 1. The U.S. is unlikely to accede to demands from Beijing to refrain from increasing the tariff, Trump said.

The U.S. already imposed tariffs on $50 billion on Chinese products earlier this year, which Beijing retaliated against on a dollar-for-dollar basis. China has since added retaliatory duties on an additional $60 billion of American products.

Chinese officials have said their key outcome from the Trump-Xi meeting is to convince the U.S. to hold off from the tariff increase, the Wall Street Journal reported, without identifying the officials.

Trump told the Journal that his advice to American companies caught up in the trade conflict is to build factories in the U.S. and make their products domestically.