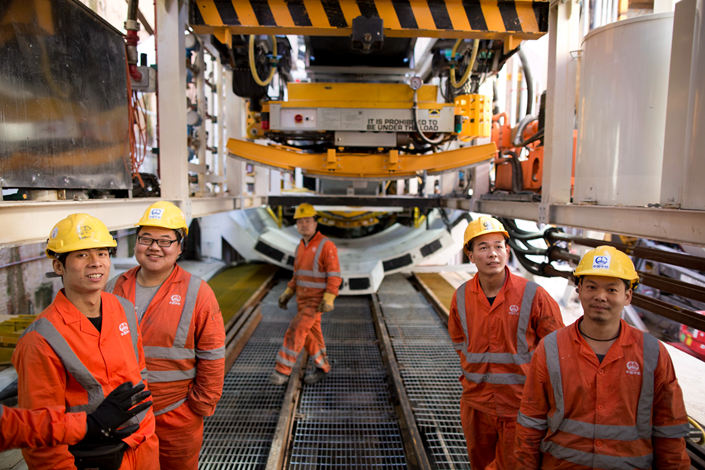 Chinese workers stand next to a tunnel boring machine at the site of a light rail project in Tel Aviv, Israel, in February 2017. Photo: IC

China’s top climate envoy has called on participants in China’s Belt and Road Initiative (BRI) to employ the highest environmental standards to reduce emissions from infrastructure projects, a signal welcomed by global climate watchers of the signature project of China’s president.

While the BRI, China’s ambitious overseas infrastructure development plan, has expanded this year, it has also endured a torrent of criticism over the debt burden projects will place on participating governments and skepticism of Beijing’s good intentions. Several nations have even moved to reconsider agreements previously signed under the BRI’s auspices.

Separately, some worry how China’s funding of massive energy development abroad might contribute to climate change, particularly through its support of high carbon-producing coal-fired power plants and other fossil fuel projects that are favored by developing countries at the heart of BRI.

With this in mind, Xie said that projects developed as part of the Belt and Road, which focuses on building infrastructure in developing markets, should be built “to the most advanced standards” and should “adopt (China’s) current domestic standards for energy conservation, emission reduction, and (mitigating) climate change.”

“It is very encouraging to see an official of Xie Zhenhua’s caliber publicly and explicitly commenting on the environmental risks that are associated with the large infrastructure projects that characterize China’s Belt and Road,” said Courtney Weatherby, a research analyst with the Energy, Water, & Sustainability Program at the Stimson Center.

Chinese officials have long called for a “green” Belt and Road, but so far analysts have been skeptical of the results. Yet Xie’s words were strongly welcomed by many, despite lacking details.

Xie is regarded as a key player in the landmark Paris Agreement in 2015, in which the world’s nations agreed to target keeping the rise in global temperatures below 2 degrees Celsius by the end of this century. He also played an important role in earlier climate change mitigation agreements between the U.S. and China. He has served as vice-chairman of China’s economic planner, the National Development and Reform Commission.

“It is very significant that Minister Xie is acknowledging the significant carbon lock-in effects of the Belt and Road Initiative, and furthermore stating that China will work hard to turn the BRI into a green, low-carbon mode of infrastructure investment,” said Kelly Sims Gallagher, professor of energy and environmental policy at Tufts University’s Fletcher School. “To effectively manage the threat of climate change, the world cannot afford a new wave of emissions from countries along the Belt and Road resulting from Chinese investments in high carbon infrastructure.”

Xie’s remarks may have come in anticipation of further criticism of Belt and Road ahead of the Poland meeting, with some worrying it could make the 2 C target more difficult to maintain.

“Given the scale of investment, how much of these flows go towards low-emission and resilient infrastructure projects could determine the success (or failure) of global climate objectives like the Paris Agreement,” a report by the Organization for Economically Developed Countries (OECD) warned in September.

Xie said there is no need for BRI countries to go through the same path of environmentally destructive growth China saw, as cleaner technology is now available. China’s four decades of unprecedented economic growth brought major environmental degradation, with the government acknowledging that one-fifth of farmland is now tainted with heavy metals and three-fifths of rivers are too polluted to supply drinking water.

Such degradation has led China to become a pioneer in green technology. The country has outpaced the U.S. and EU combined in renewable energy investment, accounting for 45% of global investment in the space in 2017. The country is the world leader in solar power, has plans for creating the world’s biggest carbon market, and overtook the U.S. to become the biggest issuer of green bonds in 2016. The Wilson Center, a U.S. think-tank, reckons China could generate 80% of its energy from renewables by 2050.

Yet China stands accused of supporting environmentally unsound development abroad. “Energy has received approximately one-third of BRI funds, but despite much rhetoric about greening the Belt and Road Chinese BRI energy investments to date are still centered on the hydropower and coal sectors,” said Stimson Center’s Weatherby.

A study by think-tank the Global Environment Institute found that Chinese companies developed or supported 240 overseas coal-powered projects totaling 251 gigawatts of capacity between 2000 and 2016, around half of that using inefficient technology. By comparison, 90% of China’s own coal-fired power uses the most efficient technology.

While talking of being green, there has been little sign of actual action, said Huang Wei, climate and energy analyst at Greenpeace. “So far, Chinese companies and banks still put an equal mark between ‘green’ and ‘complying with local standard’,” she said. “However, emission standard in developing countries along BRI tend to be appallingly low. For example, coal power emission standard in many South and Southeast Asian countries are five to 10 times poorer than Chinese standard.”

Debate remains over how much China can push for green standards in developing countries if those countries would rather pursue growth using less environmentally sound technologies. While countries might seek their own approaches, China should urge countries toward greener infrastructure so that they avoid the environmental degradation China suffered, Lin Boqiang, the dean of the China Institute for Studies in Energy Policy at Xiamen University, argued at the ‘Summer Davos’ meeting in Tianjin in September.

Yet the need for green leadership is more urgent, most analysts said. “To effectively manage the threat of climate change, the world cannot afford a new wave of emissions from countries along the Belt and Road resulting from Chinese investments in high-carbon infrastructure,” said Tufts University’s Gallagher.

Beijing may have good intentions to make Belt and Road projects green, but they need to articulate more specifically how they are going to meet that goal, said Ning Leng, a China Public Policy Postdoctoral Fellow at Harvard University’s Ash Center. “Right now the speech sounds flexible and vague,” she said.