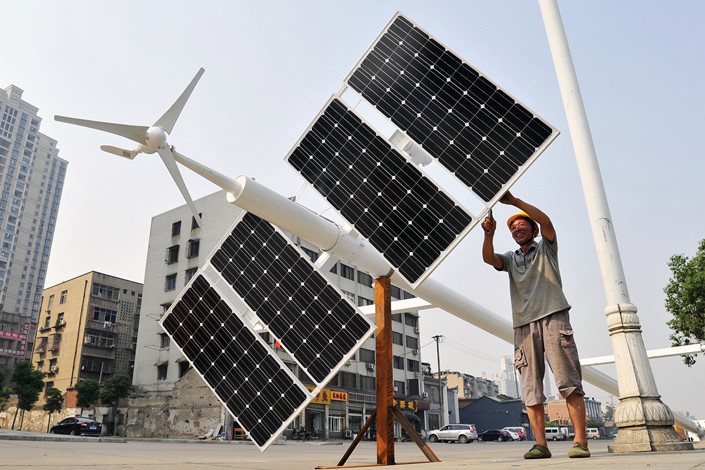 China has an unprecedented opportunity to influence whether the world will avoid catastrophic climate change, experts said at the World Economic Forum conference in Tianjin on Wednesday, but they were divided over how China could or should encourage its partners to adopt greener approaches.

These questions are critical for a country that has come to wield great influence in the developing world thanks to its Belt and Road Initiative — China’s ambitious plan to build up trade links around the world by pouring billions of dollars into infrastructure projects abroad.

During a session on China’s Green Leadership arranged by the World Economic Forum’s Annual Meeting of the New Champions, sometimes called “Summer Davos,” experts agreed that China has rapidly transformed itself into a leader of green technology and has taken major strides to clean up its domestic environment. However, they wrestled with the question of how far China should go to ensure other developing countries do not experience the same high levels of ecological damage witnessed during China’s own period of rapid economic growth.

“China has huge capacity to help countries build infrastructure needed by Belt and Road countries,” said Lin Boqiang, the dean of the China Institute for Studies in Energy Policy at Xiamen University. “We hope that all these countries will not have to repeat what China has done over the last 20 to 30 years,” he said, referring to China’s rapid but environmentally destructive economic growth.

At the same time, Lin was keen to stress the importance of respecting national sovereignty when it comes to determining what sort of infrastructure that countries decide to build.

Every country has its own approach, but China can at least foster a greater sense of urgency in seeking greener infrastructure among other countries so that they don’t have to go through the same period of pollution that China did, he said.

While not disagreeing that national sovereignty is important, Isabel Hilton, CEO and editor of environmental news website China Dialogue, said that China must take a more-active role in supporting greener projects along the Belt and Road if the world is to avoid catastrophic climate change, meaning a rise in global temperatures of 4 degree Celsius (7.2 degrees Fahrenheit).

“China’s emissions went (up) by 2.5 (times) in the first decade of this century, and so we know what happens when a country goes in that direction. But the Belt and Road is assisting countries with a (combined) population three times the size of China’s. If they follow the same Chinese model, it’s over, catastrophic climate change can’t be avoided,” she said after speaking on the panel.

She said she remains hopeful that China can have a positive influence by encouraging green projects. “Those investment decisions are being taken in this decade and the next decade, and we need emissions to go down rapidly if we have any chance of avoiding major environmental changes,” Hilton said.

China remains a country of paradoxes when it comes to environmental issues, Hilton said. According to an analysis by Greenpeace, China’s carbon emissions may have grown at their fastest pace in seven years in the first quarter of this year. This followed a steady decrease between 2014 and 2016, though experts continue to debate when China’s emissions, already the highest in the world, will peak.

At the same time, China has outpaced the U.S. and EU combined in renewable energy investment, accounting for 45% of the global investment in this space in 2017. The country is the world leader in solar power and accounted for two-fifths of the 52 gigawatts of new wind-power capacity installed last year, according to the Global Wind Energy Council. It also has plans for creating the world’s biggest carbon market, and it overtook the U.S. to become the biggest issuer of green bonds in 2016.

The kind of support China gives to projects abroad is coming under more scrutiny thanks to the major international attention garnered by the Belt and Road. Despite its mandate to support green projects, the China-led Asia Infrastructure Investment Bank has also drawn criticism for spending about $1 billion on fossil-fuel projects, with half of its approved projects in the energy sector involving fossil fuels.

Yet for Zhang Jianyu, the chief representative of the Environmental Defense Fund, it is not for China to try to discourage developing countries from developing dirtier projects entirely. “With the Belt and Road, some people are saying that China is introducing high-carbon-intensive infrastructure,” he said after the session.

However, Zhang questioned whether this view gave China enough credit. He suggested that the situation could be much worse if China were less involved as it would allow companies with less-advanced technology to step into its place. “I think China needs to do it,” he said. “We need to stop finger-pointing.”

The three-day conference will wrap up on Thursday.