By Prajwal Baral and Qiuping Li 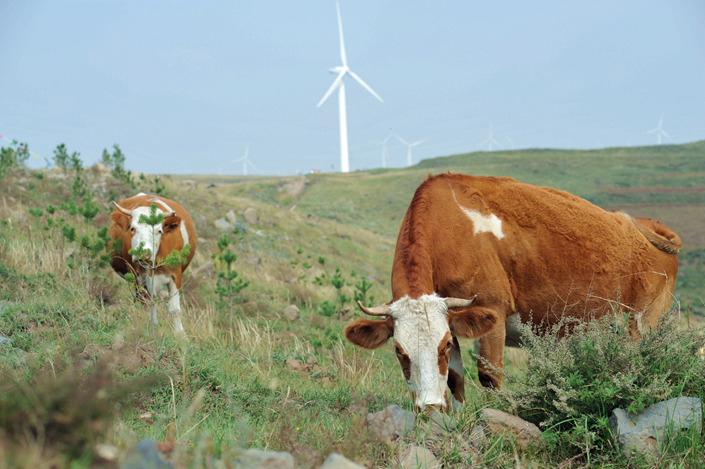 Cows graze in Zhangbei county, around 120 miles to the northeast of Beijing. Photo: Wu Gang/Caixin

In recent research published in the scientific journal Nature Geoscience, the scientists concluded that China has already peaked its carbon dioxide emissions, which the country had pledged to do by 2030 as part of the Paris Agreement. The country has dramatically reduced its coal consumption and accelerated investment in cleaner energy sources, which has already improved air quality in otherwise polluted cities like Beijing. As the world’s largest global greenhouse-gas emitter, this is an extraordinary achievement but not a total surprise to experts in the field. This is because evidence shows that China also tops the list globally in green investment, stimulated by a series of domestic economic and structural reforms over the last few years.

China has outpaced the U.S. and EU combined in renewable energy investment, accounting for 45% of the global investment in this space in 2017. The U.S. and Europe each stood at 15%. Bloomberg’s long-term economic analysis reveals that China is likely to maintain its lead in the coming decades, with 21% of global solar-photovoltaic installation and a third of global wind power installation in its portfolio by 2050. Large Chinese international clean-energy projects also grew from $32 billion in 2016 to $44 billion in 2017. We further looked into China’s total overseas energy investment in the form of foreign direct investment and construction contracts and found that almost $35 billion (40% of the total) has been invested in clean-energy projects from January 2017 to June 2018. This figure jumps to almost 50% if nuclear investment is also included. One significant trend in Chinese overseas power generation investment is the decrease in the number of coal projects and an increase in hydro projects.

China’s green investment is not limited to clean energy. It has already set a record domestic investment in other green sectors, such as low-carbon transportation, green buildings, and wastewater treatment. The investment need in these sectors, however, outweighs the current supply. China’s green investment needs are estimated to be $450 billion to $600 billion per year, and this is expected to grow in line with China’s gross domestic product (GDP) in the short term. According to the Ministry of Ecology and Environment, the newly unveiled ministry, $150 billion is needed to clean China’s urban rivers alone. Public funding is expected to meet not more than 20% of the domestic green investment demand. If low-carbon development in the Belt and Road Initiative is also included, the investment need runs into the trillions of dollars. The current supply is nowhere close to meeting such a gigantic demand.

This supply constraint prompted China to launch a series of studies in 2015 that explored green financing modalities. After the establishment of the Green Finance Committee, the 13th Five-Year Plan (2016-20) made green finance a national priority with a commitment to establishing a green financial system, developing green credit and bond products, and launching green development funds. This superior level of political commitment has resulted in explosive growth of green finance mechanisms in China. In 2016 alone, 121 (265 in total) new green funds were established, and local governments participated in 59 of them. Most of these funds are using the public-private partnership (PPP) model, leveraging investment from both domestic and international private capital markets. In 2017, green bonds issuance in China reached a record $37.1 billion, making China the world’s second-largest green bond market with a 15% market share. According to China Public Private Partnership Center’s official report (link in Chinese), China has invested in 1,556 green and low-carbon infrastructure projects by the end of 2017 with a total investment of $276 billion in the form of PPPs.

The Chinese green finance wave has also touched the Belt and Road Initiative, which connects 71 countries, represents 18.4% of global GDP, 47.6% of global population and 27.8% of global trade by value. China has taken a series of environmental measures for greening the Belt and Road Initiative, including but not limited to the launch of “The Belt and Road Ecological and Environmental Protection Cooperation Plan,” “Guidance on Promoting Green Belt and Road,” and “The Big Dada Service Platform for Belt and Road Environmental Protection.” Although these measures are conducive toward encouraging green investment from global investors, the lack of universally accepted green or sustainability standards, lack of awareness in the financial community, and low-risk adjusted returns for some of the infrastructure projects have acted as a deterrent to mobilization of investment from international private capital markets. It is estimated that the Chinese investment alone will meet only half of the investment need of the Belt and Road Initiative — the other half has to come from the private capital market, most notably, global institutional investors along with multilateral banks and foreign governments.

The Chinese leadership therefore advanced the green finance agenda under its G20 presidency in 2016, installing for the first time green finance as a key issue for member countries, which led to several financial institutions in these countries adopting green finance measures. This is an important step toward the reallocation of capital in global financial and capital markets to fuel the growing need of investment for green and sustainable development around the world.

At the domestic level, China has been consistently raising the green finance bar. On Aug. 15, the Shanghai Stock Exchange, the world’s fifth-largest stock market by market capitalization, issued rules on green-asset-backed securities, including definition, verification and disclosure requirements, which demonstrates an increased investor appetite for green products. By 2020, China will be introducing mandatory requirements for environmental information disclosure by all listed companies and bond issuers. Meanwhile, U.S. leadership has been tethering most domestic and international environmental and climate commitments, and the EU is desperately looking to China to fill that leadership vacuum. This essentially leaves international environmental and climate diplomacy in the hands of China.

Whether China will definitely be able to turn this opportunity into a golden wave of green investment at home and beyond, particularly amid today’s turbulent trade climate, is yet to be seen. It is, however, reasonable to believe that China is on the right track with its meticulously crafted action plans and strong political commitment. The country has mostly delivered on its past promises. For instance, the country declared a war against poverty two decades ago, and lifted millions out of poverty. Similarly, Chinese Premier Li Keqiang declared a war against pollution in 2014, the positive results of which are already evident in major cities across the country. With a high level of transparency and international cooperation and collaboration, China is likely to be successful in channeling the course of global investment to its ambitious low-carbon infrastructure projects along the Belt and Road corridors.