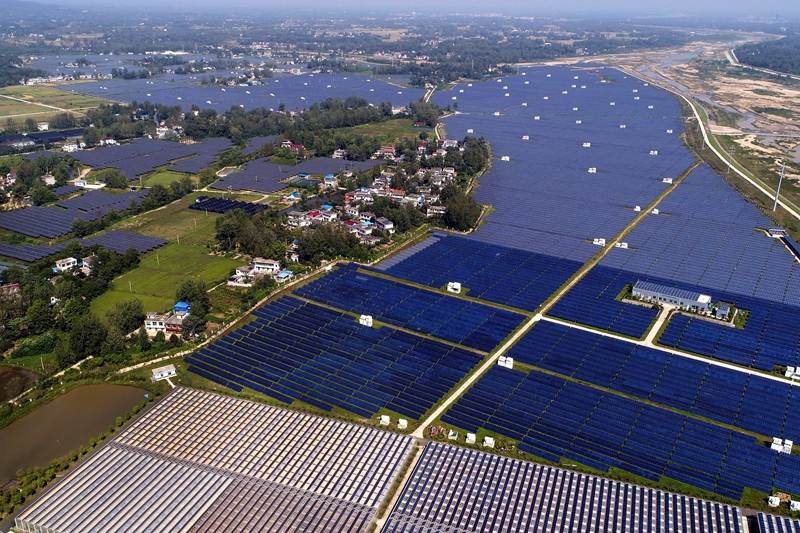 * With tightening policies, many of them are likely to fail, analysts said.

The sunny summer for China’s solar industry is seemingly coming to an end after regulators abruptly put the brakes on subsidies that have fueled the industry’s boom for nearly a decade while also raising concerns of a glut.

Shockwaves spread abroad as the new policy is expected to cause a sudden contraction in demand from the world’s largest solar market, putting downward pressure on panel prices. Consulting firm Wood Mackenzie said it expects that at least 20 gigawatts (GW) of planned solar installations will be scrapped in China this year — equivalent to a fifth of last year’s global demand. A GW is 1 billion watts, and 20 GW would be enough to power 14 million homes.

The policy change reflected regulators’ concerns that the industry has become “overprotected” with incentives resulting in excess capacity and wasted investment, analysts said.

China has led the world in solar power capacity for the past three years, reaching 130 GW by the end of 2017, official data showed. But much of that capacity has gone unused, with grids unable to accommodate enough solar-generated power. From 2015 to 2016, more than 10% of the power generated by the country’s solar farms was wasted each year because of lack of demand or transmission or storage capacity, according to government data.

The government has struggled to make incentive payments as promised subsidies accumulated quickly, sources close to the regulators said. As of early June, unpaid subsidies for solar, wind and other renewable projects surpassed 120 billion yuan, Caixin has learned. About 40% of the awaited payments are for solar projects. According to a recently released document, subsidy payments for some projects have been delayed more than two years.

Despite the recent subsidy cuts, pending payments for existing solar projects are expected to expand by 2020, adding pressure on government treasuries while contradicting the central government’s call to reduce power costs, said a person close to the policy makers.

“It is time for China to make a comprehensive plan for its long-term energy policies,” this person said.

Although calls to reduce government aid have sounded for years, many in the industry were caught off guard when the regulators announced the decision. Several solar industry sources said they were “unprepared” for the policy change. Previously, authorities adjusted subsidies once a year, and then once every six months. This time, the change came just over five months after the previous one and took effect immediately.

According to an official at the China Photovoltaic Industry Association, several large solar panel and equipment makers halted production following the policy announcement while some smaller ones completely shut down.

Some financial institutions have tightened credit controls on the solar industry reflecting increased concerns over policy-related risk, according to an employee of a financial leasing company.

In late April, Li Chuangjun, the NEA official in charge of the new energy sector, said at a news briefing that the administration was studying policies to reduce the solar industry’s reliance on government subsidies.

This year’s revival of power consumption and economic performance provided a window of opportunity for policy makers to adjust the solar subsidy rules, analysts said.

The shift is not designed to restrict the industry but to encourage projects with “advanced technology, high quality, and independence from subsidies,” NEA’s Li told state broadcaster CCTV in early June.

China’s solar boom started in 2012 when the central government decided to subsidize domestic solar panel makers hit by anti-dumping tariffs in Europe and the U.S. The incentives quickly set off a rush of solar farm construction in China.

The source of solar subsidies is a government fund with money collected from all power consumers to support renewable energy development. From 2006 to 2015, the charge has been increased from 0.001 yuan per kilowatt hour (kWh) to 0.019 yuan per kWh, or 2.87% of the average electricity bill.

Currently, the average subsidy for solar power generation is 0.3 yuan per kWh, according to Li Zhiyu, a power industry analyst. Some local governments also have their own additional subsidies to attract investment.

Backed by the subsidies, China’s new solar power installation surged 128% year-on-year in 2016 to 34.5 GW and further increased to 53 GW in 2017, about half of the total global installation that year.

Thanks to the incentives, the solar industry came to be seen as a lucrative business attracting new investors. Even when most businesses suffered a slowdown over the past two years, the industry maintained profit margins of more than 8%, according to an NDRC official.

In 2017, more than 800 companies registered in the eastern province of Zhejiang for distributed solar power generation businesses, producing electricity at or near where the energy is used, according to Wang Sicheng, an energy analyst at NDRC.

Expectations of sustained cash flow from government subsidies also made it easier for solar companies to obtain bank loans. A solar equipment company executive said it is common for investors to exaggerate investment in solar projects to get excessive loans from banks and others, which are used to fuel further expansion.

“It just like opium that you can’t stop,” said one industry source.

But the rapid growth created a serious glut. According to statistics from the photovoltaic industry association, China’s polysilicon wafers and equipment production capacity at the end of 2017 exceeded global demand that year.

Hefty borrowing, aggressive investment and heavy reliance on government subsidies has resulted in a fragile capital chain for most solar companies. With tightening policies, many of them are expected to fail, analysts said.

Some industry analysts said that as domestic demand weakens, solar companies will have to turn to foreign markets, mainly in emerging markets like India, the Middle East and Latin America.

But as the boom wanes, solar power companies in China must find ways to survive without subsidies. The industry needs to “change its mindset” and become more sophisticated at operations and management, SolarQT’s Chen said.