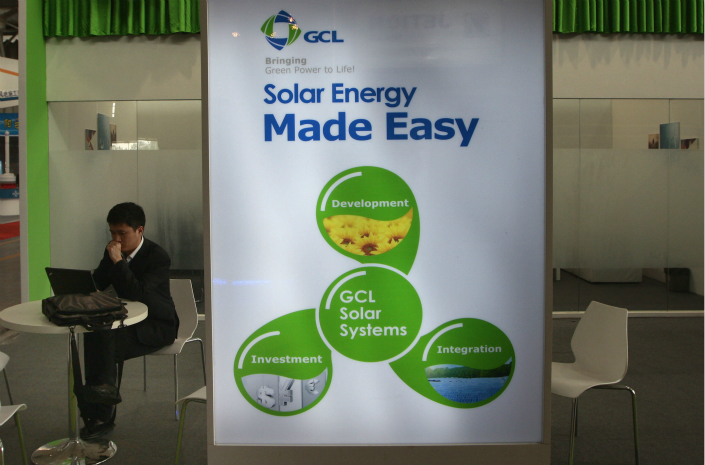 GCL Poly Energy has agreed to sell just over half of its principal subsidiary for up to 12.75 billion yuan ($1.99 billion) to shore up its finances. Photo: VCG

China’s largest supplier of polysilicon wafers — a key component of many electronics, including solar panels — has agreed to partially sell one of its major operations for up to 12.75 billion yuan ($1.99 billion), as solar-power subsidies are cut.

The sale of 51% of Jiangsu Zhongneng Polysilicon Technology Development Co. Ltd. to the Shanghai Electric Group, one of the country’s largest manufacturers of industrial equipment, will be completed half in cash and half in shares, GCL Poly Energy said in a filing to the Hong Kong Stock Exchange on Wednesday.

The deal could value the wafer-producing subsidiary at up to 25 billion yuan, but the final price is still being negotiated. GCL Poly acquired Jiangsu Zhongneng for $3.36 billion in 2009.

“Following the recent indication by the central government that it will introduce measures aiming at promoting the sustainable development of the photovoltaic industry and hastening the reduction of subsidies, GCL Poly ‘considers that it is important to find a strategic partner,’” the filing said.

Early this month, three government agencies — including the National Energy Administration — began cutting state support, including reducing subsidies, for the solar panel sector to stem overcapacity. These incentives, which have been available for years, have partly helped the country to become the world’s largest solar market.

The government won’t grant subsidies to any new ordinary solar projects this year, and support will be slashed for those that are being built, according to the new rule.

The deal to sell some of Jiangsu Zhongneng’s shares could help improve the company’s liquidity, according to several industry sources.