By Luo Guoping and Coco Feng 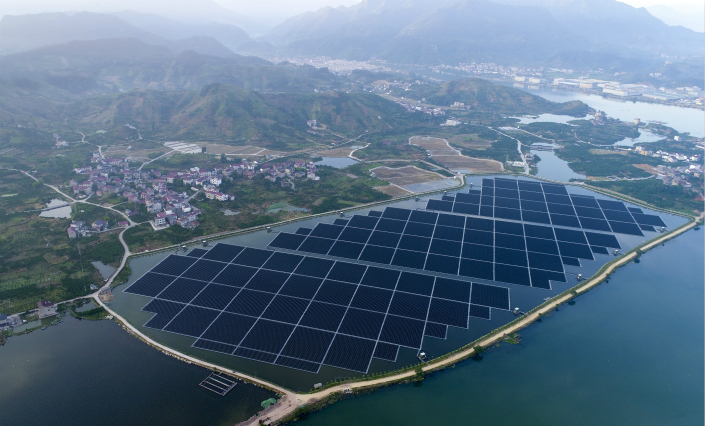 A floating solar energy farm is seen at a photovoltaic power station in Hangzhou, Zhejiang province, on May 17. Photo: IC

China has abruptly put the brakes on solar power subsidies, seeking to stem overcapacity in a sector that has benefited for years from government incentives.

The move caught many in the industry off guard.

The government won’t grant subsidies to any new ordinary solar projects this year. For those that are being built, the incentives will be cut by 0.05 yuan (0.8 U.S. cents) per kilowatt-hour (kWh).

Distributed solar power generators, which produce electricity at or near where the energy is used, can still receive subsidies if they were installed by June, according to a Friday statement (link in Chinese) by three agencies, including the National Energy Administration (NEA). But these subsidies are capped after the newly added capacity to the sector reaches 10 gigawatts (GW).

Subsidies for distributed projects installed after June 1 will also be slashed by 0.05 yuan, according to the latest policy. But the distributed power generators that were registered with subsidies last year can still receive the older version of the incentives as long as the companies’ respective power supplies are ready to supply the grid before the end of the month, the China Photovoltaic Industry Association said on Monday.

Solar facilities built as rural poverty-relief projects won’t be affected by the cut, the document said.

The policy change was prompted by the “overdevelopment” of the solar industry, the NEA said in a separate document (link in Chinese). China has led the world in solar-power capacity for the last three years, reaching 130 GW by the end of 2017, it said.

But much of that electricity has gone unused, with grids unable to accommodate 7.3 billion kWh of solar-generated power in 2017, or 6% of the solar power China produced last year.

Moreover, the government has struggled to pay the subsidies. By the end of 2017, unpaid subsidies for solar and wind power surpassed 110 billion yuan, Wang Sicheng, an analyst at the Energy Research Institute of the National Development and Reform Commission, told Caixin.

The shift is not designed to restrict the industry, but to encourage projects with “advanced technology, high quality, and independence from subsidies,” Li Chuangjun, an official from the NEA who is in charge of the new-energy sector, told state broadcaster CCTV.

Several industry professionals told Caixin they were unprepared for the policy change. Previously, authorities adjusted the subsidy once a year, and then once every six months. This time, the change was just over five months after the previous one.

Solar power producers have decided either to wait for next year’s policy or for subsidies from local governments, but it “should be very hard” for the localities to grant subsidies, the sources said.