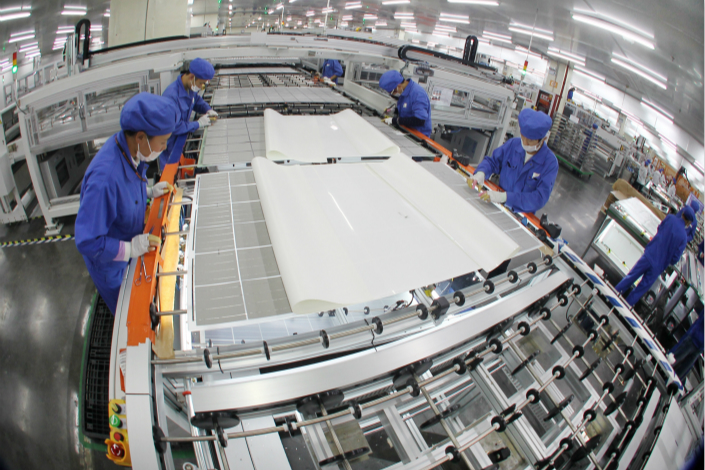 Workers check photovoltaic cells, which are used to make solar panels, in November at a plant in East China’s Jiangsu province. Photo: IC

The move was made to stem overcapacity in the surging solar industry while easing the government’s financial burden, the official Xinhua News Agency reported, citing an unnamed official from the National Energy Administration (NEA). “It is more significant to pay the price and solve the problems now than to take action in the future after bubbles emerge,” the official said.

On the last day of May, several central government departments, including the NEA, unexpectedly cut state support for the solar panel sector, including reducing subsidies. These incentives — which have been available for years — partly helped the country become the world’s largest solar power producer, with 130 gigawatts of solar generation capacity by the end of 2017.

In the wake of this announcement, many manufacturers of polycrystalline silicon — a key component of solar panels — said they will cut production capacity through September, Caixin has learned. Many small players have even halted production, and several manufacturers and assemblers are ready to lay off workers, according to a Caixin investigation.

“After the policy was issued, some grid operators simply interpreted it as a move to limit solar development and stopped bringing in solar-generated electricity,” the official said, “(this notion) should be immediately corrected.”

The policy change aims at easing the financial burdens caused by providing the financial incentives and solve overcapacity problems, the official said. The government has struggled to pay the subsidies, with unpaid incentives for renewable energy power, mostly solar and wind, surpassing 120 billion yuan ($18 billion), and much of the electricity produced going unused, with the country’s grids unable to utilize 7.3 billion kilowatt-hours of solar-generated power in 2017, or 6% of the solar power China produced last year.

At the same time, the authorities hope to ensure the survival of solar power companies that rely on technology, not subsidies.

Another reason behind the policy change was that the cost of materials that make solar panels has dropped by 17% since the end of last year, Xinhua reported, citing an unnamed official in charge of pricing at the National Development and Reform Commission, China’s top economic planner.