By Qin Ziyi and Han Wei 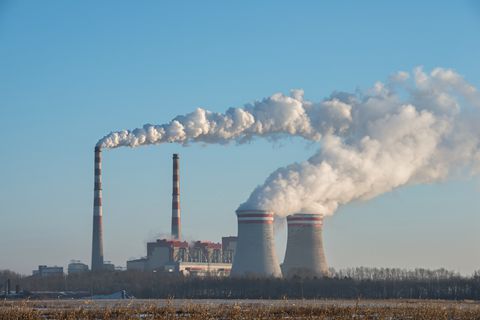 The nationwide expansion of a “cap and trade” system from a pilot program comes as China ramps up its battle against choking air pollution. It’s unclear when the trading in the power sector will actually begin. But when it does, China will overtake the European Union in operating the largest market in terms of the total amount of carbon traded.

The National Development and Reform Commission — the country’s top economic planner — on Tuesday laid out a detailed roadmap to build a nationwide carbon-trading system. Initially it will cover 1,700 power plants, but will be expanded to more industries, the commission said. It delivers on a pledge by President Xi Jinping to get a carbon-trading system rolling in 2017.

Cap-and-trade uses market incentives to try to reduce overall carbon emissions. The government will set an overall cap for releases and tell companies their pollution allowance. Those who pollute less can sell their leftover quota to big polluters.

Power plants that discharge more than 26,000 tons of carbon annually will qualify to be in the trading system, the NDRC said. It means the cap-and-trade market will cover almost all of the country’s power generators, dealing with more than 3 billion metric tons of carbon-dioxide emissions per year.

A report by the Environmental Defense Fund (EDF), a non-profit environmental-protection organization based in the U.S., estimates that China’s power sector releases about 3.5 billion metric tons of carbon dioxide every year — about 40% of the country’s annual greenhouse-gas emissions.

That would make China the world’s largest carbon market, overtaking the European Union, whose annual cap-and-trade transactions are valued at around 14 billion euros ($16.5 billion).

In 1997, nearly 200 countries and areas of the world came together in the Kyoto Protocol to agree on the need to reduce greenhouse gases tied to human activities, such as electricity generation, transportation and agriculture. The idea of emission trading was written into the protocol.

The European Union broke ground in 2005 as the first of the international treaty’s parties to roll out a carbon market. Several other countries and areas followed, including New Zealand, South Korea and the U.S. state of California.

Since 2013, China has run pilot carbon-trading programs in seven regions, including Beijing, Tianjin and Shanghai, covering 3,000 companies. As of September, cap-and-trade transactions in the pilot program reached a total of 4.5 billion yuan ($680 million).

The Paris summit on climate change was held in 2015. Shortly before, in a meeting with then-U.S. President Barack Obama, President Xi promised to roll out a nationwide carbon market in China by 2017, as part of the two countries’ commitment to cooperate in the battle against global warming.

Under an initial plan by the NDRC last year, the carbon-trading market would have begun with eight industries, including power, petrochemical, steel and aviation. Any company that consumed more than 10,000 tons of coal in a year between 2013 and 2015 would have been required to participate in the program.

The new plan is more targeted, zeroing in solely at first on the power industry. Zhang Yong, an NDRC vice chairman, said the power sector is the most obvious choice to start with because it holds comprehensive emission data and is the largest emitter of greenhouse gases.

“We want to start from the power industry and put in place the structures and supportive mechanisms necessary for the operation of the system,” before fully launching the trading, Zhang said.

It is unclear when the trading will start and how the emission allowances will be allocated. The NDRC said the quota allocated to the power industry will use a reference-line method and look to companies’ historical emission-reduction records for reference. Companies that have better management and lower emissions will be given higher emissions quotas.

“For companies that meet the emissions target, the more they produce, the more they benefit from the quota. While those can’t meet the targets will be burdened to buy the quota,” said Jiang Zhaoli, deputy director of the climate-change division at the NDRC.

How will carbon prices be set?

After the national market is fully functional, companies qualified to be in the national system will no longer trade in regional markets. Smaller emitters will remain at the local platforms, according to Li Gao, director of the climate-change department at the NDRC. Li said the threshold of carbon trading will be lowered in the future to expand the coverage of the market.

Li said the carbon-trading price will be fully decided by the market, reflecting the demands of the quota and costs of emission reduction.

That means accurate and transparent pollution and emission data will be crucial for the carbon-price setting, said Chen Bo, a financial and environmental policy expert at the Central University of Finance and Economics in Beijing.

“The quality of the data is most important because any uncertainty may lead to price fluctuation,” Chen said.

Environmental activists have called for better disclosure of pollution information.

Ma Jun, director of non-profit Institute of Public & Environmental Affairs (IPE), said that as China nears the rollout of a national carbon market, it should speed up public access of data on greenhouse-gas emissions, as promised last year by the State Council — China’s cabinet — in a key emission-reduction policy for the 2016-2020.

Liu Shuang, a director at Energy Foundation China, said the carbon price will be affected by government intervention in power supplies and prices setting. For instance, some power plants were told by the government to halt operations due to a shortage of gas to heat homes. Therefore, she said, China will need to coordinate energy and environmental reforms with the carbon-trading system in order for the system to work.