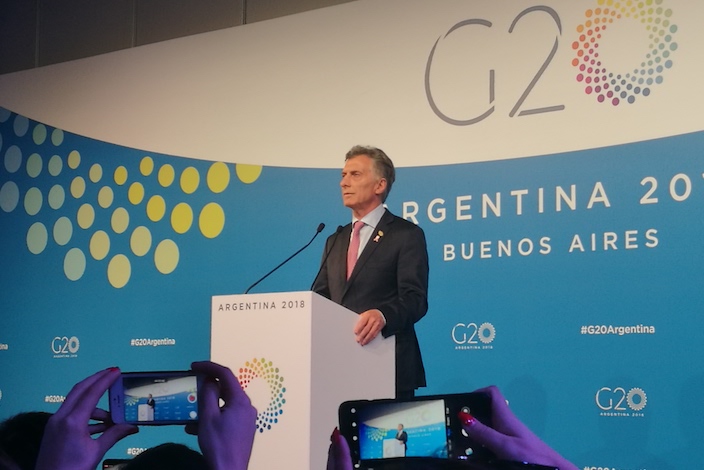 G20 members at the closing of the group's summit. Argentina became the first Latin American country to host the meeting. Photo: Han Wei/Caixin

(Buenos Aires) — Leaders of the Group of 20 industrialized countries (G-20) agreed the global trading system needs improvement, including reform of the World Trade Organization, but stayed mute on protectionism following their latest meeting in Argentina.

The statement at the end of their meeting came against the backdrop of an ongoing trade war between the U.S. and China, which saw positive signs as the two countries agreed after the meeting to postpone threatened additional tariffs and try to hammer out their own comprehensive bilateral deal within 90 days.

“We renew our commitment to work together to improve a rules-based international order that is capable of effectively responding to a rapidly changing world,” said the joint statement issued as G-20 leaders wrapped up their two-day meeting Saturday in Buenos Aires, Argentina.

The issuance of a communiqué is seen as a good result, as some feared that this year’s gathering could end up as another high-stake leaders’ meeting without an agreement. Ominous signs preceded the meeting as both this year’s G-7 summit and the Asia-Pacific Economic Cooperation forum ended without customary joint statements.

Leaders of the world’s 20 major economies agreed on a rules-based world order, WTO reform, fighting financial risks, sustainable growth and gender equality, among other issues, according to the document. They also affirmed the importance of a multilateral trade system, while noting “the system is currently falling short of its objectives and there is room for improvement.”

“We therefore support the necessary reform of the WTO to improve its functioning. We will review progress at our next summit” in Osaka, Japan, said the document.

This year’s joint declaration was the first omitting a reference to the risk of protectionism. Anti-protectionist terminology has been part of G-20 pledges since the forum was created in 2008 during the global financial crisis.

“All parties supported the multilateral trading system” during negotiations for the communiqué, which clearly means opposition to protectionism, Wang Xiaolong, director general of international economic affairs of China’s Ministry of Foreign Affairs, said at a press briefing after the summit.

The missing reference to protectionism is seen as a compromise to the United States. Since his inauguration in 2017, President Donald Trump has taken a more protectionist approach to trade by approaching trade agreements on a bilateral basis, rather than a multilateral one traditionally used. He has imposed punitive tariffs on U.S. trading partners, with the hardest of those targeting China.

“Trump seeks to advance a global economic system that is based on fair economic competition and free, fair, and reciprocal trade,” the White House said in a statement issued the day the G-20 summit ended, adding Trump is working with other leaders to fight unfair trade practices.

Unfair trading practices were not mentioned in the communiqué.

Leaders embraced strong global economic growth of recent years but acknowledged “it has been increasingly less synchronized between countries,” according to the communiqué. They added that key risks, including geopolitical concerns and financial vulnerabilities, have partially materialized.

They reaffirmed a pledge to use all policy tools to achieve strong, sustainable, balanced and inclusive growth, and safeguard against downside risks, by stepping up dialogue and actions to enhance confidence.

Answering questions about negotiations behind the declaration, China’s Wang said making compromise based on mutual understanding is the essence of multilateralism.

Wang called the communiqué a “positive” result. “The reason China supports the agreement is because there is no content that will hurt the interests of China and other developing countries,” said Wang. “It will help maintain the momentum of G-20 cooperation and global economic stability.”

However, G-20 leaders failed to reach a consensus on climate change, following the U.S.’s decision last year to withdraw from the Paris accord as other members of the group repeated their commitment to implement the deal.

"We will continue to tackle climate change, while promoting sustainable development and economic growth," said the communiqué.