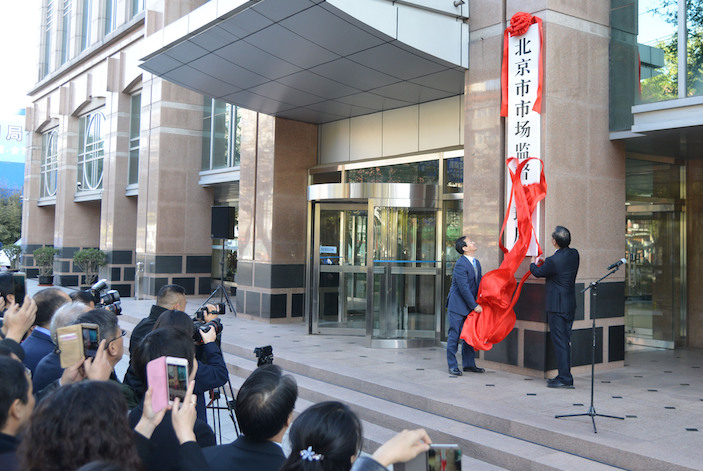 In September 2008, U.S. beverage giant Coca-Cola announced plans to buy Beijing-based China Huiyuan Juice Group Co., Ltd. for $2.4 billion. The news drew public attention — according to an online survey at the time, more than 80% of respondents opposed the merger for “juice market security” reasons or because Huiyuan was a “national brand”.

But the authorities had other concerns. In March 2009, after reviewing the planned merger for months, China’s Ministry of Commerce officially blocked the purchase.

This was the first real test of China’s anti-monopoly law, which came into effect just a month before Coca-Cola’s announcement. In the ten years since the law debuted on Aug. 1, 2008, much has changed in the Chinese market. While administrative monopolies -- those created by government policy -- remain a chronic problem, the rise of internet companies presents a new challenge.

Now, the country is embarking on a new experiment in its continued struggle against monopolies — the merger of its three separate antitrust law enforcement agencies into the single State Administration of Market Regulation.

The China’s National People’s Congress approved in March a plan to combine three existing agencies — the Anti-Monopoly Bureau of the Ministry of Commerce, which regulated mergers, the Price Supervision and Anti-Monopoly Bureau of the National Development and Reform Commission, which handled price-related monopolistic behavior, and the Anti-Monopoly and Anti-Unfair Competition Bureau of the State Administration of Industry and Commerce, which dealt with non-price-related cases. Further details issued by the State Commission Office for Public Sector Reform in September clarified staffing and other arrangements for the newly created bureau.

Much has been achieved by China’s three antitrust agencies over the past decade — 2,437 cases involving concentration of operations, 165 cases involving price fixing, 55 cases involving abuse of market dominance, and 193 cases of administrative monopoly, as of October.

Antitrust experts told Caixin that the decentralization of antitrust law enforcement had some benefits, including performance competition between agencies and a more balanced distribution of power. However, that decentralized structure meant there was often a lack of coordination. While the bureaus regulating price-related and non-price-related behavior worked independently of each other, price and non-price behavior were often intertwined in the market, said the experts, who declined to be named. “Sometimes a business will be punished twice by different law enforcement departments,” one source noted.

There were also inconsistencies between regulations set by the three agencies, such as in the regulations on exemptions from price-fixing agreements, Tian Xiaofeng, a Shanghai-based lawyer with experience in antitrust cases, told Caixin. “Sometimes, when we’re lodging complaints or responding to investigations on behalf of the businesses we represent, there is still some confusion over specific evidence requirements and proof standards,” Tian said.

At the same time, splitting up antitrust duties allowed some violations to go unpunished, with companies using mergers and acquisitions to cover up price-fixing agreements and other illegal arrangements, Liu Xu, a researcher at Tongji Unversity’s Intellectual Property and Competition Law Research Center, told Caixin.

One major challenge for the new SAMR is oversight of administrative monopolies, which are still widespread in China despite the practice being prohibited by the Anti-Monopoly Law.

In June, Beijing’s traffic police came under fire from the SAMR for allowing the Industrial and Commercial Bank of China to monopolize the handling of traffic fine payments in the city, on suspicion of “abusing its power” to maintain the bank’s monopoly.

Days before SAMR announced the Beijing case, it had published an official letter to the government of the Inner Mongolia Autonomous Region, accusing it of allowing one company to monopolize the region’s market for official seals, which are used throughout China to validate documents.

The existence of administrative monopolies are “closely related to (China’s) stage of economic development, its administrative system, its industrial structure, its weak legal awareness and the relative lack of a competitive culture in China,” an official from the SAMR told Caixin.

China is currently working on the implementation of a fair competition review system, after the National Development and Reform Commission together with other bureaus issued provisional rules in October 2017. The system, once in place, is expected to help rein in administrative monopolies by requiring local and central government departments to review their own practices for anti-competition bias.

But, aside from the difficulties of conducting such reviews, central and local governments in China are taking steps to attract investment and boost flagging growth that could conflict with the requirements of the fair competition review system, Huang Yong, an advisor to the Anti-Monopoly Committee of the State Council, told Caixin.

The problem of how antitrust regulation should be applied to internet companies became a pressing issue with the acquisition of Uber China by domestic ride-hailing giant Didi Chuxing in August 2016.

Didi already dominated the ride-hailing market at the time, after a bloody subsidy war with Uber. The Chinese company controlled 85.3% of the Chinese ride-hailing market while Uber accounted for 7.8%, according to a 2015 report by research company Analysys. Didi didn’t apply for antitrust clearance from the Ministry of Commerce before the merger, saying that the companies’ combined earnings fell under the 10 billion yuan threshold stated in China’s antitrust law. Nevertheless, in September 2016, the Ministry of Commerce began an antitrust investigation into the merger.

More than two years later, the investigation is still in progress, Wu Zhenguo, Director of the anti-monopoly bureau of the SAMR, told Caixin on Nov. 16. “We are studying the patterns and characteristics of internet competition,” Wu said.

The case was clouded by ambiguity from the start. Like many internet startups, neither Didi nor Uber China were profitable at the time of the merger, meaning the normal earnings thresholds for antitrust investigations didn’t apply. It was also unclear which industry the companies belonged to. Some government documents refer to online ride-hailing as a part of the wider taxi market, so even though Didi dominates the ride-hailing market, it can hardly be considered a monopoly when traditional taxi companies are included in calculation.

The internet has made it more challenging for antitrust authorities around the world to do their jobs well, the SAMR told Caixin.

New economy businesses, such as internet companies, innovate quickly and blur the boundaries between traditional industries, the SAMR said in a reply to questions from Caixin. At the same time, these companies’ market positions change rapidly, with new leaders constantly usurping older players.