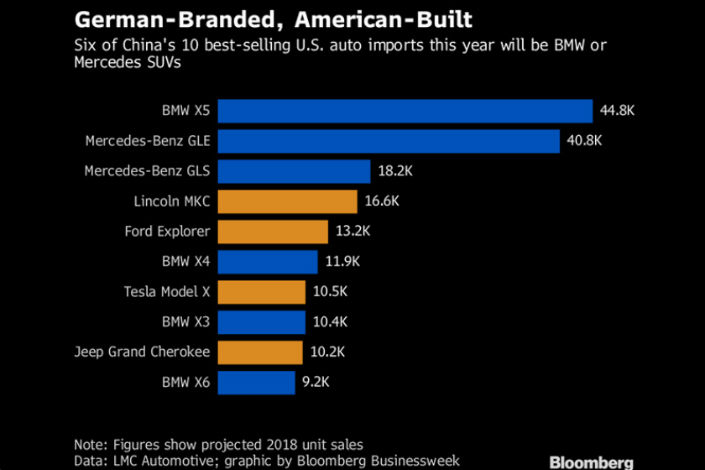 (Bloomberg) —Treasury Secretary Steven Mnuchin said China has agreed to eliminate tariffs on imported automobiles but declined to give details after President Donald Trump jolted car stocks by announcing a deal had been reached.

Trump said in a tweet late Sunday that China agreed to “reduce and remove” tariffs on American-made vehicles, raising more questions about the outcome of his meeting with counterpart Xi Jinping during the Group of 20 meeting in Argentina this weekend.

“The first part was to reduce the surcharge, but yes there have been specific discussions on where auto tariffs will come down to, but I’m not prepared to talk about the specifics,” Mnuchin later told reporters outside the White House.

Larry Kudlow, Trump’s top White House economic adviser, later told reporters that the Chinese are “going to roll back their auto tariffs,” adding “That’s got to be part of the deal.”

Trump gave no other details in his tweet, which came shortly after he agreed with Xi to a truce in the trade war during a meeting at the G-20. It’s unclear whether China would reduce its car tariffs immediately or as a result of a broader deal. In a briefing in Beijing a few hours after the tweet, China’s foreign ministry spokesman Geng Shuang declined to comment on any car tariff changes.

The uncertainty about a deal on car tariffs stems from the unusual nature of the G-20 negotiation. The outcome of the talks wasn’t recorded in a joint statement, and so the two sides have instead emphasized different results. China hiked its tariff on U.S.-made cars to 40% earlier this year in retaliation for tariffs Trump imposed on Chinese imports, and Beijing has made no announcement about reducing the car tariff.

China said last week that tariffs on U.S. autos would be 15% if not for the trade dispute, and it called for a negotiated solution. Chinese officials discussed the possibility of lowering tariffs on U.S. car imports before Xi met Trump in Argentina, according to a person familiar with the situation who asked not to be identified. But the magnitude and timing of such a reduction were unclear, the person said.

The U.S. currently charges a 27.5 % tax on imported cars from China.

The trade war has taken a toll on car companies that manufacture in the U.S., with the makers of Mercedes-Benz and its rival BMW both warning of lower profits this year as tariffs forced them to hike prices in China. Car sales in the world’s second-biggest economy declined for a fifth consecutive month in October, bringing the market closer to its first annual drop in at least two decades. That’s piled pressure on auto companies that have relied on the country for growth amid declining car sales in the U.S.

The tariff reduction benefits Daimler and BMW more than U.S. automakers such as General Motors Co. or Ford Motor Co. That’s because the German luxury brands dominate the top 10 list of vehicle imports into China.

“China isn’t giving away that much as German automakers like BMW and Daimler benefit the most,” said Janet Lewis, an analyst at Macquarie Capital Securities in Tokyo. “Longer-term, China has more to gain from free trade in autos,” with local Chinese manufacturers such as Guangzhou Automobile Group Co. and Geely Automobile Holdings Ltd. looking to move overseas, she said.

“If China cancels tariffs on high-end imported cars, that should benefit dealerships as the prices will be lower,” said Angus Chan, a Shanghai-based analyst with Bocom International.

Of China’s $51 billion of vehicle imports in 2017, about $13.5 billion came from North America, including sales of models made there by non-U.S. manufacturers like BMW. China imported 280,208 vehicles, or 10% of total imported cars, from the U.S. last year, according to China’s Passenger Car Association.

U.S. exports of cars and light trucks to China were worth $9.5 billion in 2017 and have dropped off significantly since China imposed its retaliatory tariffs over the summer. That gave exporters in Europe and Japan a significant advantage.

Foreign automakers have long pleaded for freer access to China’s auto market, while its own manufacturers are trying to expand abroad. In April, China announced a timetable to permit foreign automakers to own more than 50% of local car-making ventures.

Mnuchin told reporters Monday that the U.S. got a “strong commitment” from China to deal with currency devaluation. He said the U.S. is concerned about the weakening of the yuan and that administration officials have discussed the issue with China over several months.

“I’ve had direct discussions over the last several months with the governor of the Peoples’ bank of China,” Mnuchin said. “These discussions we had with the vice premier and we had discussions with President Xi and President Trump and there is a strong commitment from China to deal with this issue and make sure they don’t continue to devalue the currency.”