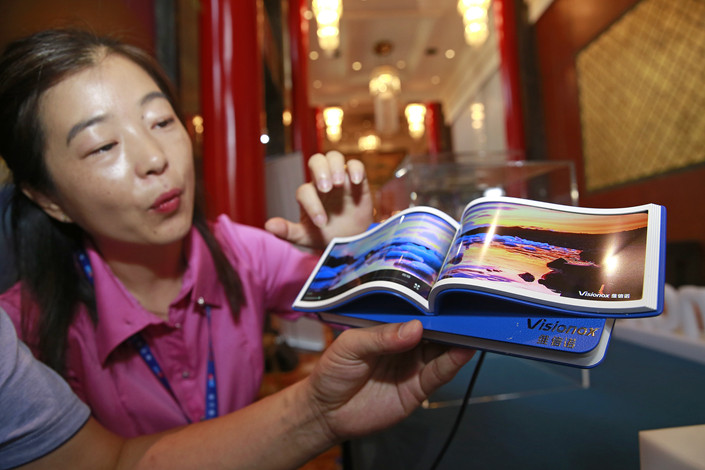 A flexible e-book is displayed at the China International OLED Industry Conference on Sept. 6 in Tianjin. Photo: VCG

The plant, which will be based in the western city of Chengdu, was first announced in April. It will produce luminescence materials indispensable to OLEDs.

OLED panels are more bendable, energy efficient, thinner and brighter than their predecessors in the display panel industry — liquid crystal displays. They have been widely adopted in smartphones, big-screen TVs and automotive displays. Apple Inc.’s iPhone X is the company’s first OLED phone, while the Apple Watch has been using a flexible OLED panel since its first generation.

Idemitsu Kosan said its plant will cover 14,600 square meters (157,150 square feet). Construction will start this month and is slated for completion in November, according to a company statement released Monday. Commercial production will begin in the first quarter of 2020.

No financial terms were disclosed but an earlier report by the Nikkei Asian Review said the plant will cost 1.3 billion yen ($11.4 million).

“In China, backed by the support of the government’s policy to boost growth in the display industry, investment in OLED display manufacturing facilities mainly by leading display makers has been on the rise, and production of OLED displays in the country is expected to surge from this point forward,” the statement said.

The plant will help Idemitsu Kosan accommodate the growing demand for OLED materials in China, and to “enrich technical support to Chinese customers.”

Beijing has made development of the country’s panel industry a strategic part of its national plan, and local governments are rushing to foot the bill for such developments, as China tries to move away from lower-end manufacturing into more high-tech products.

Expansion of small OLED display capacity is expected to accelerate in 2019 as first-tier Chinese panel-makers such as BOE Technology Group, Visionox and EverDisplay build new production lines to meet rising demand from smartphone brands such as Oppo, Vivo and Huawei, Bloomberg reported in November.

“China’s planned production capacity in active-matrix OLED is expected to surpass that of South Korea in the future, and this draws the attention of materials providers,” said Boyce Fan, a Taipei-based analyst with industry tracker TrendForce Corp. “Foreign companies have to expand their footprint in China so that they will have a lead in the supply chain.”

Tokyo-headquartered Idemitsu Kosan was founded in 1911, with oil distribution as its core business. It has diversified into the OLED business as demand for petroleum slows.

The company currently owns one OLED materials plant in Tokyo, and another in South Korea.