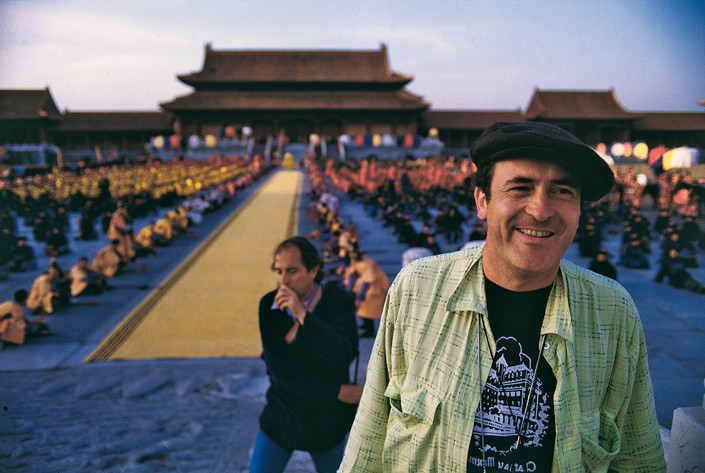 Bernardo Bertolucci in the Palace Museum, Beijing during the filming of "The Last Emperor" in 1987. Photo: VCG

Italian film director Bernardo Bertolucci, who died in late November, produced dozens of films over a career that spanned five decades, including 1972’s controversial “Last Tango in Paris.” But in China he is best remembered for “The Last Emperor,” an Oscar-winning historical epic that broke ground as the first modern foreign film to “discover” a Chinese box office now challenging the U.S. as the world’s largest.

Filmed in Beijing in 1987 and based on the life of Puyi, the last emperor of China’s last imperial dynasty, the film was the first Western feature to be made in cooperation with the Chinese government. It was also the first to ever be filmed in the Forbidden City, the former imperial residence now known as the Palace Museum, and was the first major Western film to screen in China at roughly the same time as its release in other global markets.

The film followed the Qing Dynasty’s Puyi from his coronation as a mere toddler through his abdication and installation as the ruler of Japanese puppet state Manchukuo during the Second World War. It also depicted Puyi’s re-education at a “War Criminals Management Center” after the People’s Republic of China was established in 1949, as well as his experience of the Cultural Revolution of the 1960s and 1970s — a period still fresh in the minds of many Chinese at the time of the film’s 1988 China release.

Bertolucci’s death on Nov. 26 prompted a stream of retrospectives in Chinese state and social media focused on “The Last Emperor,” which won nine Oscars in 1988.

Bertolucci visited China in the 1980s and “was filled with curiosity about this mysterious, legendary, Eastern country,” according to an obituary by the Beijing Youth Daily.

“In the version shown in China, only a few sex scenes were cut, while all content portraying the ‘Cultural Revolution’ was left intact,” according to a post by (link in Chinese) National Humanity History, a WeChat account run by the People’s Daily.

Some social media users described memories of the film from their formative years.

“In high school, after reading a news magazine, my entire class drew the curtains and gathered to watch ‘The Last Emperor,’” Weibo user 5852417299 said in a post on Nov. 27. “I’ll always remember the peerless talent of Joan Chen in the movie.”

“As someone born in 1983, I flipped through the issue of Beijing Film Pictorial magazine featuring this film as a child,” a user named Lechao wrote on popular Chinese movie review site Douban, where the film has a score of 9.0 and ranks 61st in its “Top 250” list of films.

“The Last Emperor” came to China at a time when homegrown films were also gaining increasing recognition abroad, just as the country was opening up and beginning to experiment with market economics. In the 1980s and 1990s, members of the “Fifth Generation” of Chinese filmmakers began producing films like Chen Kaige’s “Yellow Earth” in 1984 and Zhang Yimou’s “Raise the Red Lantern” in 1991.

Bertolucci’s film received mixed reviews when it first premiered, with foreigners liking it more than Chinese, according to Hong Kong economist (link in Chinese) and writer Steven S. Cheung, who reviewed the film in 1988.

“In the past, the China films made by foreigners were always a little jumbled and confused and a little nonsensical, and were laughed at by Chinese people,” Cheung wrote. But he added that Bertolucci’s film was “better than films by Chinese people, which is something we should reflect on.”