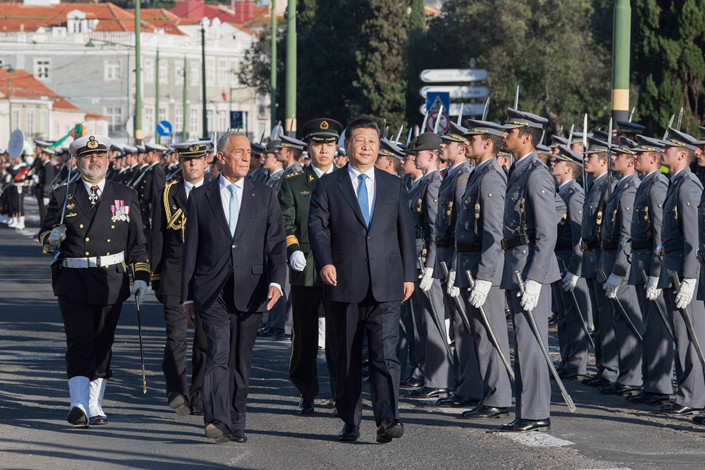 Portugal edged closer to joining the Belt and Road Initiative, China’s ambitious plan to develop global infrastructure, although it stopped short of a full endorsement as the European Union moved to increase scrutiny of Chinese investment.

Among the deals for enhanced cooperation on trade and education, the most eye-catching was an agreement for Portugal to “promote” the Belt and Road. De Sousa said he “supported” the project, adding that “Portugal is the important junction that links the Silk Road and the maritime Silk Road.”

The language “stopped short of the commitment made by most other countries that have signed memorandums to “jointly construct” the BRI,” RWR Advisory Group said in a note. However, “this is still a significant development in China’s pursuit of BRI support in Western Europe,” it added.

The hesitancy may have been an acknowledgement of the growing wariness of Chinese investment expressed in recent months by Portugal’s EU partners such as Germany. A day after Xi’s Portugal visit, the European Parliament agreed to set up a more rigorous investment screening system under which the European Commission would investigate outside investment into strategic EU infrastructure such as ports, Reuters reported.

Chinese companies have become major investors in Portugal’s infrastructure in recent years. After being one of the countries hardest hit by the 2008 financial crisis, Portugal allowed China State Grid to take a 25% stake in energy operator REN S.A., while major conglomerate Fosun Group is the biggest shareholder in lender Banco Comercial Português S.A.

In May, Chinese state-owned utility enterprise China Three Gorges Corp. offered 9.1 billion euros ($10.3 billion) to raise its stake in Portuguese peer Energias de Portugal. While the bid was initially rejected by the company for being too low, a larger deal would be China’s biggest overseas acquisition of the year if approved.

Portugal’s government has also said it will approve plans for the deep-water port of Sines to be integrated into the Belt and Road. Chinese companies already have stakes in Europe’s three largest ports, in Rotterdam, Antwerp and Hamburg. Such developments have been greeted with alarm in much of Europe, which is concerned over China’s influence in the bloc’s trade architecture.

Germany has also expressed concerns at the security ramifications of allowing Chinese telecommunications giant Huawei to develop the country’s 5G infrastructure. This week in the U.K., one of the European countries most welcoming to Chinese investment, the largest wireless carrier said that it will remove Huawei equipment from its system.

But Portugal has moved in the other direction. Yesterday Altice Portugal, the country’s largest phone network, announced a contract with Huawei for the Chinese company to develop its 5G infrastructure over the next year.

Given Portugal’s already strong ties with China, its reticence in fully endorsing the Belt and Road may have been influenced by the Spanish government’s announcement during Xi’s visit a week earlier that it will not be signing on to the initiative. Ahead of the visit AFP cited a senior Spanish official who said that it would be better for his country to work through EU projects for Asia connectivity, rather than bilaterally with China through the BRI. In this context, Portugal may have felt obliged not to be seen to cozy up too much to China, said Hannah Cotillon, a risk analyst with London-based consultancy AKE International.