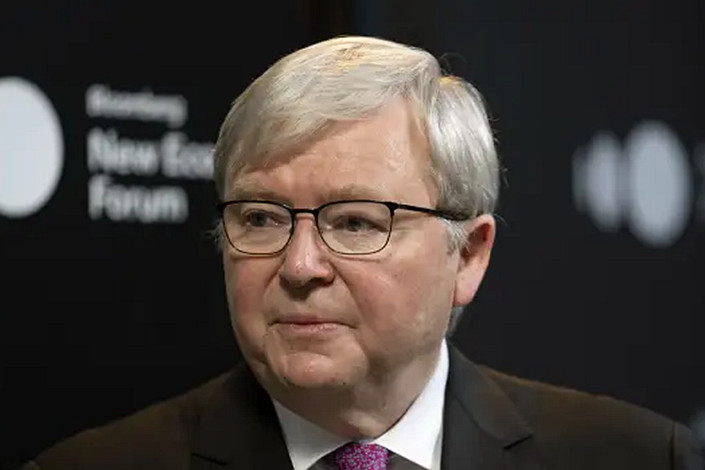 In a "supremely ironic" move, China may even seek to negotiate entry to the TPP-11, says Kevin Rudd. Photo: Bloomberg

(AFR) — China could be preparing to spring a global compact to drive tariffs to zero, and approach Trans-Pacific Partnership (TPP) members including Australia for access to the grouping, positioning Beijing as a champion for free trade.

That’s the view of former Prime Minister Kevin Rudd, who believes China’s President Xi Jinping may even use next month’s World Economic Forum summit in Switzerland to launch across-the-board liberalization that would “take the world by storm.”

“That indeed could represent a serious new challenge to American leadership,” Rudd warned in a speech in New York on Wednesday.

A dramatic China pivot on trade would coincide with intense negotiations to meet the basic terms of a 90-day truce between Xi and U.S. President Donald Trump, which has failed to settle financial market jitters amid uncertainty about the details.

According to Rudd, who is president of the Asia Society Policy Institute, the ceasefire has bought valuable time for both China and the U.S., but also the broader global economy to avoid an even more dangerous trade deterioration.

“What Presidents Trump and Xi Jinping did in Buenos Aires was buy time. Three months’ worth in fact,” Rudd said, “which is good when measured against the alternative, which was a full-blown trade and broader economic war between the two countries starting next month.”

At last weekend’s dinner meeting in Argentina, the presidents agreed to suspend a planned hike in tariffs on $200 billion in Chinese goods to the U.S. from 10% to 25%.

Rudd said that by March Trump will have a better handle on whether the U.S. Fed’s rate hikes have softened his economy — helping determine the extent to which the U.S. economy can weather further tariffs if the deal collapses.

China’s leadership will equally benefit from the pause in hostilities, setting the stage for Xi to “take a bold trade message to Davos” which may include further pledges to allow foreign firms to compete against Chinese companies on an equal footing.

“We should also not rule out the possibility in 2019 of China pitching any tariff reforms that it is prepared to implement to resolve the U.S. China trade war to the wider international community as well,” Rudd said.

“We should not rule out the possibility, for example, that if China was to undertake something dramatic — like a commitment to zero tariffs over time — that such a commitment would not just be made on the basis of reciprocal actions by the United States, but by all WTO member states,” Rudd said, referring to the World Trade Organization.

“Indeed, this would represent and almost irresistible geopolitical opportunity for China to champion global free trade and to arrest the global trend towards protectionism that currently threatens the wider global economy,” he said.

In a “supremely ironic” move, China may even seek to negotiate entry to the TPP-11, which was originally conceived by the Obama Administration as part of pivot to Asia, and which may end up including China but not the U.S. itself, he said.

“This would comprehensively outflank the United States within the Asia Pacific region,” Rudd noted. “China, when it sees a political and market opening, can be remarkably fleet-of-foot.”

“The technical negotiations would of course be formidable. But there is already evidence of a softening in traditional Japanese reservations towards possible Chinese accession as evidenced during Prime Minister Abe’s recent visit to Beijing.”

Rudd predicts that on foreign policy and security, 2019 will see China “increasingly pull its head in.”

“There is already evidence of a normalization in relations with Tokyo,” he said, noting a reduction in the frequency of Chinese incursions into the Diaoyudao islands in the East China Sea, which Japan calls the Senkaku islands. “China is also seeking to de-escalate tensions with the ASEANs over the South China Sea through an intensification of its negotiation of a “code of conduct.”

Other signs include a de-escalation of tensions with India, a more moderate position on Taiwan and “considerably less political fanfare within China” about the Belt and Road Initiative.

“Common to all these adjustments in the year ahead is a general tactical approach that until such time as China is able to finally bed down the fundamentals of its trade, investment, and economic relationship with the United States, it is wise for China to reduce tensions between Beijing and other countries and regions of the world,” Rudd said.