By Ren Qiuyu and Wang Jiawen 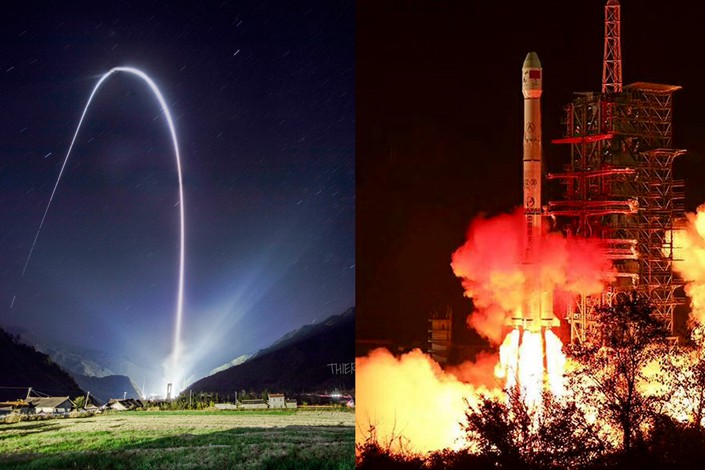 A Long March 3B rocket carrying the Chang'e-4 blasts off from the launch pad at the Xichang Satellite Launch Center near Xichang, Southwest China's Sichuan province, on Dec. 8. Photo: VCG

In the early hours of Saturday morning, official Chinese media reported that China’s fourth lunar exploration craft, the Chang’e-4, was successfully launched from the Xichang Satellite Launch Center in Sichuan province. In early January, the spacecraft is expected to land on the far side of the moon — the side of the moon that always faces away from Earth.

If successful, the historic undertaking could substantially deepen the world’s understanding of the moon and the solar system. Here are some key things to know about the mission.

This is the first attempt by any space program to land anything on the far side of the moon.

More than 100 lunar probes have been launched, but only unmanned lunar orbiters and the manned Apollo missions have ever sighted the moon’s far side. The Soviet spacecraft Luna 3 photographed the far side in 1959, and American astronauts aboard Apollo 8 became the first humans to see it for themselves, in 1968. If the Chang’e-4 successfully lands, likely in early January, it will make history as the first landing on the far side of the moon.

The far side is not visible from Earth, and it also cannot receive any radio signals, making communication impossible. However, in May, China launched the Queqiao (Magpie Bridge) satellite, which will facilitate communications between stations on Earth and the spacecraft.

Chang’e-4 is carrying multiple other experiments on board.

While the robotic lander aboard the spacecraft is set to explore the far side’s surface — which is much different than the rest of the moon — and potentially give scientists insight into the moon’s evolution and history, six other experiments aboard the probe will also be carried out. Two of the experiments are Chinese, and the other four are from Sweden, Germany, Saudi Arabia, and the Netherlands.

According to Chinese media, some of these experiments will take advantage of the lack of radio interference to carry out low-frequency astronomical studies. Another will involve mineral testing. One of the Chinese experiments, designed by Chinese universities, will attempt to grow potatoes and a flowering plant similar to cabbage in a bid to create a “lunar mini-biosphere.”

Originally, the Chang’e-4 was a backup vessel for the preceding lunar mission, carried out by the Chang’e-3. In December 2013, the Chang’e-3 became the first spacecraft to successfully soft-land on the moon since the Soviet Union’s Luna 24 in 1976. Chang’e-3’s rover, Yutu, or Jade Rabbit, worked nearly six weeks before suffering “mechanical abnormalities,” and transmitted data only intermittently for the rest of its 31-month life. Despite the difficulties, it is the longest-running lunar rover in history.

However, the successful landing of Chang’e-3 meant that Chang’e-4 was available for use.

The lander and rover together weigh just under 3,000 pounds, and the rover is still unnamed.

Because it was originally built as a backup to the Chang’e-3, the two spacecraft are similar in weight. The lander weighs 2,600 pounds and the rover weighs just over 300 pounds.

In an online poll, the Chang’e-3 rover was named Yutu, or Jade Rabbit, after the pet rabbit of the goddess of the moon (Chang’e) in Chinese mythology. When the Chang’e-4 mission was officially announced at a news conference in August, the officials also announced another competition to name the rover. While three names were shortlisted in October, the official name has not yet been announced.

This launch will end the second phase of China’s three-phase lunar exploration program.

The first two Chang’e missions in the first phase aimed to orbit the moon; the second two missions are for landing on the moon. The third and final phase, which will use the Chang’e-5 and Chang’e-6 crafts, will collect and return lunar samples. The Chang’e-5 mission is planned for late 2019.

Officials from the China National Space Administration told the state-run China Daily newspaper that there are plans to land on the northern and southern lunar polar regions by 2030. China’s other ambitious plans for becoming a space power by 2030 include building a reusable launcher, a permanently manned space station and a Mars rover.