In-Depth: The Dark Side of a Model Official 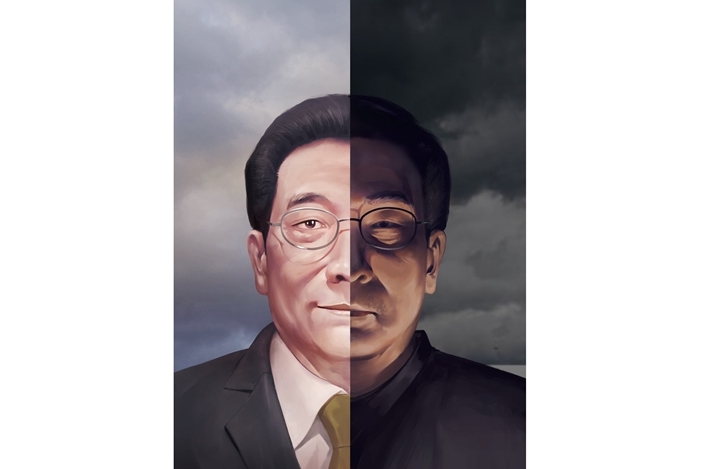 Fifty-four-year-old Pu Bo’s life in China’s bureaucracy reached a new peak in January when he was appointed vice governor of Guizhou province in the country’s southwest. But that glory didn’t last long.

Only 102 days after his appointment, Pu was put under investigation by the ruling Communist Party’s anti-graft watchdog for “serious violations of discipline and law,” a euphemism for corruption.

In late November, the Supreme People's Procuratorate said Pu would be arrested and face criminal charges of taking bribes. Earlier that month, the Central Commission for Discipline Inspection (CCDI) and the National Supervisory Commission expelled Pu from the party and dismissed him from public office, citing allegations of taking bribes, abusing power, gambling and other violations.

In video footage released by state media, Pu trembled while confessing that his mistakes, saying they were warning lessons for everyone.

That is not the Pu that many people remember. Pu’s fellow officials often saw him as a role model who strictly obeyed party rules and intentionally stayed away from unnecessary social networking in Chinese officialdom.

But the self-disciplined, low-profile Pu had another side to his life, investigators said, in which he quietly built up a sprawling network of nepotism and secret business dealings.

In a statement concluding its investigation on Pu, the CCDI accused him of violating the boundary between business and government. His behavior has “seriously damaged the local political environment, violated party discipline and broken the law,” said the commission.

The fall of Pu was a surprise to many. Since taking office in Guizhou, he had been busy proposing new policy plans and making visits across his new jurisdiction. Two days before the CCDI announced its investigation, Pu was shown on local TV news attending a government meeting on anti-corruption.

But sources close to him said an ominous sign emerged early this year when a businessman closely linked to Pu disappeared from public view.

In April, Shenzhen-listed drug maker Chengdu Taihe Health Technology Group Inc. said the company had been unable to reach its owner and chairman Wang Renguo. This was his second disappearance in only a few months. In January, Wang had gone missing for over two weeks but later returned to his position.

Several sources in Chengdu, the capital of Sichuan, told Caixin that Wang was interviewed by police in two separate investigations. The January inquiry into Wang was linked to the investigation of Hengfeng Bank and its disgraced former chairman Cai Guohua, who was accused of embezzlement, while the April probe involved Pu. On Nov.13, seven months after his second disappearance, Taihe Health issued a statement saying Wang had again returned to work.

Sources told Caixin that Wang had been a close ally of Pu since the latter worked in the city government of Guangan, also in Sichuan, in the early 1990s. Pu spent over a decade in Guangan officialdom, rising to vice mayor in 1999.

Wang, 46, is a Guangan native who started his working life as a salesman. In 2002, Wang entered the local real estate industry when China’s housing market started a boom and set up Taihe Real Estate Co, which later became the parent of Taihe Health.

A Sichuan financial industry source told Caixin that instead of making money from property development, Wang accumulated a fortune mainly through investments in local financial institutions starting in 2012. Since then, Wang obtained control of a number of commercial banks, rural banks and microloan companies in Sichuan and Hebei provinces. In late 2017, Taihe Group said its total assets exceeded 100 billion yuan ($14.5 billion), making it the second largest company in Suchuan after agribusiness giant New Hope Group.

A Sichuan banking source told Caixin that Wang sought to acquire property projects that had flaws, such as poor profitability or a complicated liability structure, so he could buy the assets at lower prices. He then pledged the projects as collateral to get bank loans for further acquisitions.

People familiar with Wang said Pu had helped Wang to set up ties with bank executives and to get bank loans.

Through an introduction from Pu, Wang met Hengfeng Bank’s Cai, who subsequently provided financial backing to Wang, sources said. In November 2017, Cai was removed from his post and put under investigation after an unidentified whistleblower accused Cai and other executives of misappropriating millions of yuan in bank funds.

Some of the institutions controlled by Wang have drawn regulators’ attention for problems similar to those at Hengfeng Bank. In December, the central bank issued a notice accusing Guangan Siyuan Rural Commercial Bank, in which Taihe Group is the biggest shareholder, of falsifying business records. Several bank executives are currently facing criminal charges in the matter.

A person close to the matter said Guangan Siyuan had transferred some of the deposits it received directly to Wang’s personal accounts.

Two sides of the same coin

Pu climbed up the career ladder from the bottom. Born in a small county in Nanchong, Sichuan, Pu started as a low-level clerk in a local forestry research institute. In the 1990s, he was transferred among administrative jobs in several regions of Sichuan. People familiar with Pu at that time described him as a hard-working and capable young official.

In 1999, 35-year-old Pu was named deputy mayor of Guangan, overseeing local state-owned company reforms. Several Guangan sources told Caixin that Pu was seen as one of the most promising young officials in Guangan at that time.

One of his former colleagues in Guangan said Pu had high standards for his work and was always nice to his subordinates. He was always willing to help but never accepted any compensation. “He had very high ambitions,” said the source.

But there was also controversy in Pu’s early career, with some complaining he granted favors to his relatives and associates in local businesses. For example, Pu’s cousin bought a coal mine with only 20,000 yuan from a local state company in Guangan when Pu was an official there, one person claimed, adding the mine was later sold at over 10 million yuan.

In 2010, Pu was promoted to the Sichuan provincial government as the vice director of the organization department, which oversees the selection of officials. People close to him said he used his power there to build a network of nepotism and to satisfy his appetite for money.

Pu was promoted again in 2015, this time to be party chief of Deyang city, a major economic hub in Sichuan. In the public eye, Pu was an austere official who strongly promoted local economic development. In 2016 and 2017, Pu initiated over 200 projects in Deyang covering infrastructure, technology, healthcare and other sectors.

But a Deyang official said many of the projects launched by Pu didn’t go through a public bidding process and were instead awarded directly to businessmen from Guangan and Dazhou, some linked to Pu.

Several sources told Caixin that Pu also used his power to meddle in local businesses including the sale of Shenzhen-listed Sichuan Jinlu Group. Shortly after Pu took office in Deyang in 2015, he blocked a previously agreed deal to sell Jinlu to private conglomerate Neoglory Group and then helped a Dazhou businessman named Liu Jiang take control of Jinlu, sources said.

To block the Jinlu-Neoglory deal, Pu sent police officers to Neoglory’s offices demanding confidential business documents, according to Zhou Xiaoguang, chairwoman of Neoglory. Several executives at Jinlu and Neoglory were subsequently detained by Deyang police on allegations of damaging a listed company’s interests.

Yang Shoujun, a former president of Jinlu, told Caixin that despite being in control of Jinlu, Liu always spoke with people over the telephone before he made major business decisions. A Neoglory source said Liu once admitted that Pu was one of the people.

Jinlu was not the only business in which Pu was involved. According to the CCDI statement, Pu illegally obtained stakes in a number of listed and unlisted firms.

Several of the Sichuan companies are linked to another Dazhou businessman named Tang Mingyang, an acquaintance of Pu.

In 2017, Tang was investigated for his involvement in a loan fraud case at Pudong Development Bank. Pu stepped in to rescue Tang, a person close to the matter said.

In contrast to his stiff and isolated image in the eyes of fellow officials, Pu was seen as an open and enthusiastic figure in business circles. Several businessmen said Pu was very helpful to his entrepreneur friends. But that help came with a price. Businessmen approached Pu by losing huge amounts of money to him in poker or Mahjong, sources said. “Pu is addicted to” playing cards and Mahjong, one person said.

In its statement, the CCDI said Pu had used “gambling to collect huge amounts of money” and was “trading power for money through gambling.”