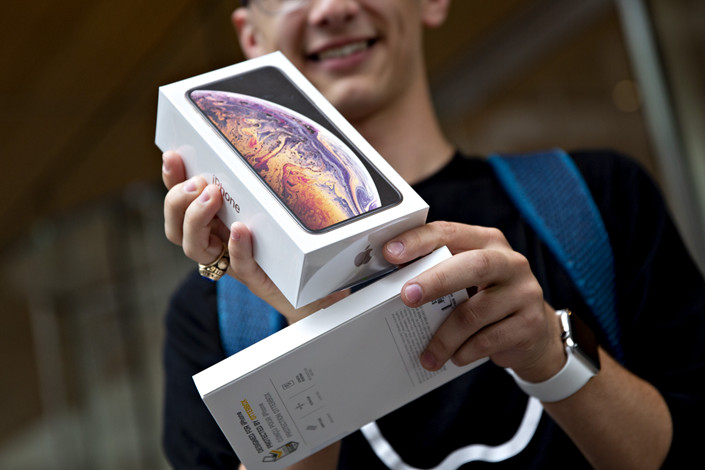 Apple's iPhones — the majority of which are made by assembly partner Hon Hai Precision Industry Co. Ltd. in China — have so far been spared in the China-U.S. trade war.Photo: Bloomberg

(Bloomberg) — Apple Inc.’s suppliers will keep making iPhones in China if the U.S. imposes tariffs on the devices — unless those levies skyrocket.

Suppliers figure they can keep production in China at a 10% tariff level but will consider shifting out of the country if the U.S. moves to 25%, according to people familiar with the matter. Apple and its partners are assessing their supply chains as the U.S. and China fight over trade terms between the world’s two largest economies.

iPhones — the majority of which are made by assembly partner Hon Hai Precision Industry Co. Ltd. in China and shipped around the world — have so far been spared in a tit-for-tat trade war. But President Donald Trump told the Wall Street Journal last month that tariffs could be slapped on smartphones and laptops made in China, the world’s largest manufacturer of electronics.

Apple has long used China as its production base for everything from the signature iPhone to iPads and Macs. The company’s supply chain now spans hundreds of companies, culminating in assemblers such as Hon Hai and Pegatron Corp. Apple didn’t respond to requests for comment. Hon Hai and Pegatron declined to comment.

Apple’s manufacturing partners are largely beholden to the U.S. company’s wishes. Migrating parts of the sprawling network they underpin will be difficult and the U.S. company seems to be in wait-and-see mode for now, one of the people said. An Apple partner has already suggested alternative locations for non-iPhone production, but the U.S. company has indicated there’s little need to make such a move for now, another person said.

That may change if tariffs escalate, an outcome now in the balance as Washington and Beijing begin thorny negotiations on a trade deal that could scale back a series of tariffs implemented this year. Apple, already grappling with mounting evidence that its latest iPhone line-up has failed to excite consumers, can ill-afford a sharp hike in import taxes.

A 10% tariff could result in an earnings-per-share decline of just $1 for Apple, should all its hardware sold in the U.S. be subject to the levy and the company absorbs the cost, RBC analyst Amit Daryanani wrote in a Nov. 28 research note. That compares with the average 2019 Apple-EPS estimate of $13.32, according to data compiled by Bloomberg.

However, a more severe scenario of a 25% tariff — absorbed by Apple — could result in an earnings-per-share decline of about $2.50, he added.

In his early years running Apple, Tim Cook would respond to questions about increasing manufacturing in the U.S. by saying the skill sets in China are more conducive to producing the company’s products. However, in recent months, he has modified that view, saying in an interview this year that “it’s not true that the iPhone is not made in the United States.” Some components, like the smartphone’s glass cover, are manufactured in the U.S. and shipped for assembly in China.