By Yu Hairong and Lin Jinbing 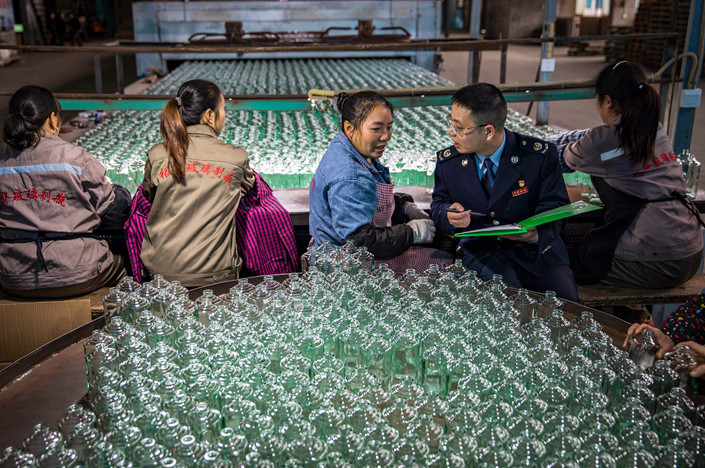 Staff of a local tax bureau in the western city of Chongqing work a shift at a glass bottle factory to better understand how the production process works. Photo: VCG

* Leaders such as President Xi Jinping have promised to offer, and did offer, more support for the private sector

* China is expected to cut 200 billion yuan more in taxes and fees in 2018, on top of the 1.1 trillion yuan target set earlier this year

(Beijing) — China’s central government is considering keeping its general public budget revenue for 2019 the same as this year, local officials familiar with the matter told Caixin.

That means the nation will likely roll out more tax cuts to boost the slowing economy, the officials said on condition of anonymity because they were not authorized to speak to the media.

Each year, the central government sets a growth target for its general public budget revenue which enables it to pursue its economic and social goals. For 2018, the government projected (link in Chinese) it would grow to 8.5 trillion yuan ($1.2 trillion), up 5.2% from 2017 levels. Around 90% of this revenue has come from taxpayers in recent years, official data show.

A budget revenue growth rate of zero for 2019 would indicate policymakers were making efforts to collect less money from businesses in a bid to ease their financial stress.

Chinese companies, especially small and private ones, have borne the brunt of the slowing growth due to a deleveraging campaign and a trade war with the U.S. Since earlier this year, a depreciating yuan, a slew of bond defaults and a rush of margin calls on pledged shares alongside a bearish market have all weighed on their businesses, as well as their confidence.

Over the past months, the nation’s top leaders including President Xi Jinping and Premier Li Keqiang have all promised to offer, and did offer, more support for the private sector and small businesses.

Due to a recent raft of preferential policies, China is expected to cut an additional 200 billion yuan in taxes and fees in 2018, on top of the 1.1 trillion yuan target set earlier this year, according to Finance Minister Liu Kun.

Limiting the flow of money into government coffers, especially for a slowing economy, is not easy.

The Chinese government can make more room for tax reductions by cutting back on unnecessary expenses and optimizing the composition of its expenditures, suggested Liu Shangxi, head of the Chinese Academy of Fiscal Sciences, a Finance Ministry-backed research institute.

Another way is to increase tax revenue by improving the efficiency of tax collection, Liu told Caixin in an October interview (link in Chinese). Generally speaking, this would come from reducing tax evasion and avoidance.

One example is the reform of replacing business tax with a value-added tax (VAT). Business tax is imposed on the entire income that a taxpayer earns from providing services, transferring intangible assets like intellectual property rights, or selling real estate.

A VAT, known as a goods and services tax in countries like Canada and Australia, is levied on the basis of value added to the goods or services at each stage of production or distribution, such as the difference between the wholesale and retail prices of a product.

The VAT reform in recent years has made it tougher to evade or avoid tax, multiple tax specialists say, as a company has to ask their suppliers to pay their VAT and give it the VAT invoices for its own tax deduction. This creates a mutual supervision mechanism.

On the other hand, the reform has helped lower the tax burden on the business sector by removing the issue of double taxation. When a company pays a VAT, a tax reduction on the VAT that its suppliers previously paid is available. No such reduction is available if it pays business tax.

China ceased collecting business tax in May 2016, when it introduced a VAT nationwide. In late 2017, it abolished the regulation on business tax.