Parents Up in Arms Over Canceled Math Event 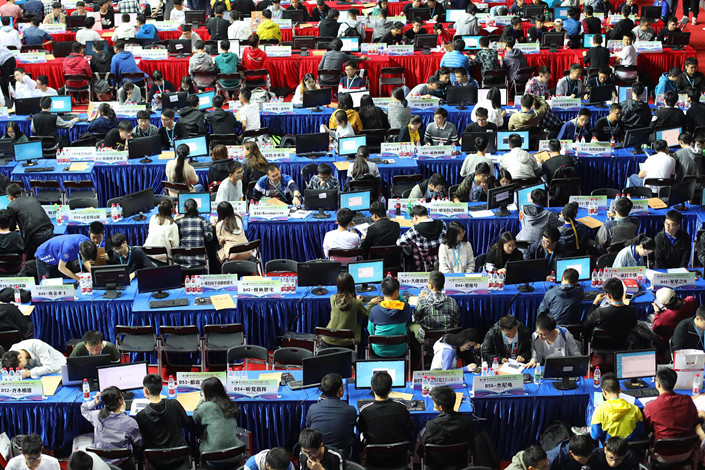 Parents around Beijing are up in arms after China’s Ministry of Education canceled the preliminary round of a popular annual mathematics competition for elementary and middle school students.

The trial round, used to choose participants for a larger March competition known colloquially as the “Spring Cup,” was canceled on Dec. 7, the day before it was to be held. The competition is one of four major math tournaments in Beijing seen as stepping stones to entry into the city’s top middle and high schools.

The abrupt cancellation reflects the growing battle between parents — who are determined for their children to stand out from the crowd in China’s competitive education system — and the government, which is striving to manage the market around young students’ extracurricular activities.

“We went crazy preparing for tomorrow’s exam, and now it’s canceled again,” said Li Yi, the parent of a fourth-grader.

“It was canceled so suddenly, they told us on December 7,” Zhang Wen, the mother of a different competitor, told Caixin.

The ministry raised the stakes late Monday night, posting an announcement that labeled the competition “illegal.”

“The activity was not reported to the Ministry of Education or to the Beijing Municipal Education for approval,” the statement said (link in Chinese). “(It) is an illegally organized subject competition.”

Extracurricular lessons and competitions for schoolchildren have proliferated in China alongside increased competition for places at top schools. Some parents spend thousands of dollars per year on extracurricular lessons, either to make their child’s résumé more impressive or because of their lack of belief in the quality of education in Chinese public schools.

But the growth has brought waves of government and public concern that young students face too much pressure. The latest came this year, when the Ministry of Education reiterated a requirement that businesses obtain a school permit before offering educational services. The ministry also banned teachers in extracurricular programs from giving students homework, and barred organizations that are not schools from running exams and competitions for elementary and middle school students.

Previous crackdowns on after-school classes and competitions have faded not long after implementation, and competitions and classes have been revived after laying low for a short period. The Spring Cup has had its official name changed multiple times to avoid detection, being called an “exhibition” or “invitational” to mask its competitive nature, though it has always colloquially retained the “Spring Cup” title.

The Spring Cup began in 1984 as a government-sponsored competition to stimulate students’ interest in math and reward outstanding students. As the number of students in Beijing grew, the competition became more intense until it was the pinnacle of student mathematics competitions in the city. The government stopped sponsoring the competition in 2005, but it has continued to run — without official approval.

This year, the Spring Cup was officially called the “2018 ACM-ICPC Youth Programming and Popular Science Invitational,” an apparent reference to the Association for Computing and the International Collegiate Programming Competition. It is unclear whether either organization was officially affiliated with the Spring Cup, but neither is known to have programs and competitions for elementary schools. Calls to Beijing Gifted and Talented Education Center, the education consultancy that appears to have organized the cup, went unanswered.

“Math competitions are not demonic, they’re not intrinsically worse than other interest classes,” Li said. “I don’t know what’s going on this year. We study for this competition and sneak around. It’s almost like drug trafficking.”

The cup is so entrenched that many businesses offering extracurricular classes offer training courses geared specifically toward preparing for it. A teacher surnamed Wang at one training school told Caixin that they will just have to wait and see if the competition will go ahead in March as planned. “If the cup is canceled, we’ll refund the money,” she said.