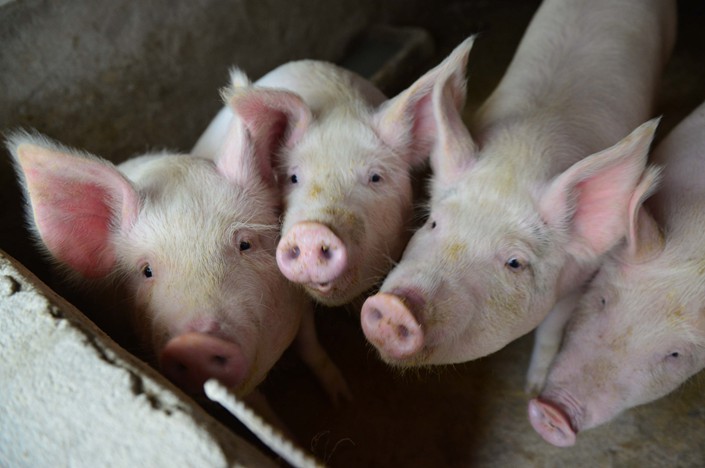 Pigs on a farm in Fuyang, Anhui province on Dec. 5. Photo: IC

*At least 22 provinces and provincial-level regions have been affected by outbreaks of African swine fever, leading to the culling of more than 600,000 pigs

*This could lead to farmers deciding not to breed the animals, which would cause a shortage of China’s favorite meat and stoke inflation

(Beijing) — The spread of African swine fever could help stoke inflation in China next year as a shortage of pigs could lead to a surge in pork prices, an official with the country’s economic planning agency warned on Saturday.

China is the world’s largest pork producer and consumer, and the disease, which has affected at least 22 provinces and provincial-level regions across the country, has already led to the culling of more than 600,000 pigs.

If African swine fever can’t be controlled, farmers will be reluctant to breed the animals, causing a shortage of pork which could trigger a big jump in prices in the summer or second half of 2019, Lu Yanchun, head of the Price Monitoring Center of the National Development and Reform Commission (NDRC), said at a conference on Saturday. Pork accounts for around 60% of China's meat consumption, he said.

“Pork prices carry a significant weighting in the consumer price index (CPI), at around 3%,” said Zhang Lu, chief macroeconomic analyst at consultancy CEBM Group, a subsidiary of Caixin Insight Group. Pork has the biggest weighting in the food category of the CPI, which is the primary driver of the overall index, she said.

The average price of a live pig slumped to an almost eight-year low in May, according to figures compiled by data provider CEIC, but has been on the rise since then. The price of pork in the shops is still falling on a year-on-year basis, but the scale of the drop has narrowed sharply. Prices were down 1.1% year on year in November, data from the National Bureau of Statistics (NBS) show, compared with a drop of 16.7% in May. NBS figures show consumer inflation overall has remained within the government's ceiling of “around 3%” this year. The CPI rose 2.2% year on year in November and has averaged 2.1% for the first 11 months as a whole, NBS data show.

“The current situation of preventing and controlling African swine fever remains very serious, and the task is very difficult,” Vice Premier Hu Chunhua said last week during a national conference called by the State Council to discuss the disease. He called for better prevention and control systems, and better regional planning, coordination and supervision.