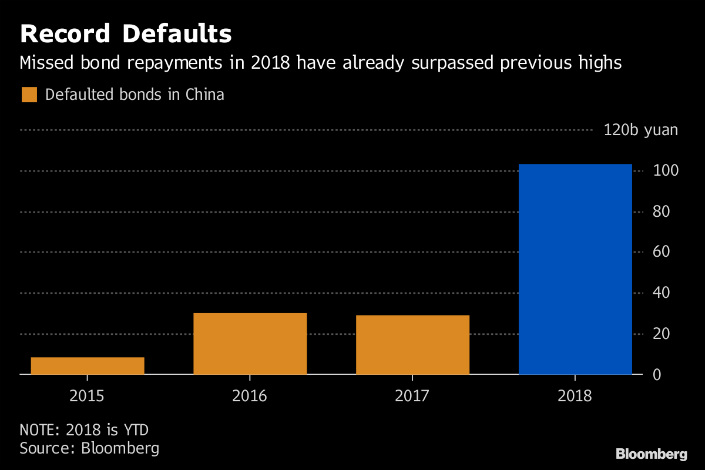 (Bloomberg) — China’s effort to cut the burden of insolvent companies weighing on its slowing economy has kicked into higher gear, with a slew of bankruptcy filings that’s set to enrich the case history of debt resolutions for bond investors.

Local courts have accepted or plan to accept at least five bankruptcy applications from firms that defaulted on publicly issued bonds since early November. That’s roughly on par with the number seen over the previous four years. The new pace may continue: China’s top planning body called on Dec. 4 for local officials to clean up the debt of firms with excess production capacity or insolvent balance sheets by 2020.

The bad news is that some bondholders may find they’re going to get less back from defaulted issuers than they anticipated. The good news: there’s likely to be swifter resolution once court procedures take over from ad-hoc work-out negotiations. And the process will give both creditors and debtors the chance to gain experience in restructuring obligations, little more than four years after China began embracing the concept of defaults in the world’s third-largest bond market.

“Bondholders could face considerable losses after bankruptcy proceedings, but what is more important is that they can learn how to fight for their rights via the legal system, and how to choose among debt proposals,” said Ivan Chung, an associate managing director at Moody’s Investors Service in Hong Kong.

As with many things in China, government direction is probably behind the latest development, market players say. China is steadily encouraging a financial system where the pricing of credit bears more relation to the risk of the borrower. Local and central authorities have for decades moved to support — press creditors to support — troubled companies that could fuel unemployment and social unrest if they collapsed.

“Usually, local governments would only allow firms or creditors to file for bankruptcy proceedings if they couldn’t come to any agreement with financial institutions and other creditors after long negotiations,” said Chen Sheng, a Shanghai-based senior partner at Rolmax, a Chinese law firm.

Some creditors will probably have bigger losses than they expected, he also said. Average recovery rates for unsecured creditors in liquidation cases might be 10% to 15%, he said.

China’s bankruptcy law has been in place for more than a decade, though corporate bond defaults in the modern era only began in 2014. This year, issuers have reneged on payments on a record 103 billion yuan of local bonds, adding to the need for clear procedures. Workout plans of only three bond delinquents have been made public after they went through a court restructuring, with Dongbei Special Steel Group Co. Ltd. perhaps the best known.

The National Development and Reform Commission, in its statement earlier this month, encouraged local governments and courts to coordinate and support the acceptance of applications for bankruptcy. At stake is helping to shut down less productive parts of China’s industries, improving productivity and pricing power.

“Resorting to bankruptcy proceedings is an effective way for bondholders to protect their interest, although it is time-consuming and the recovery rate is uncertain,” said Sun Chao, vice general manager of fixed-income at Changjiang Securities in Shanghai. “No matter if issuers end up being restructured or being liquidated, bondholders can get something back.”