Frustrated Shared-Bike Riders Go to Ofo in Search of Refunds 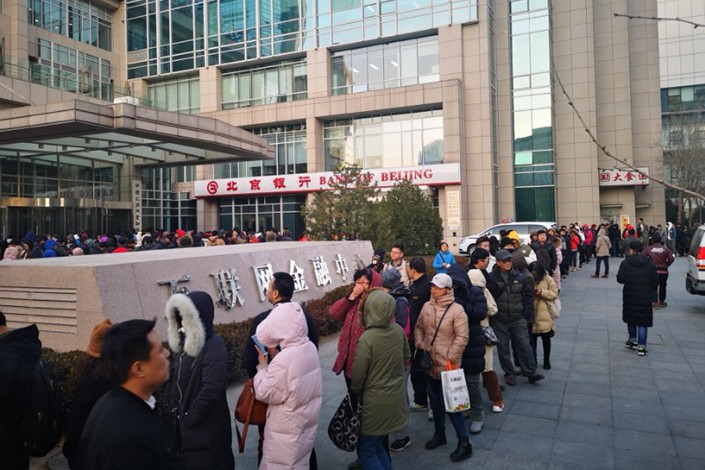 A line of more than 100 people seeking return of deposits formed in Ofo’s office lobby and spilling outside of the company’s Beijing headquarters on Monday. Photo: Qian Tong/Caixin

Users of the cash-strapped shared-bike app Ofo are showing they won’t go down without a fight, gathering in droves at the company’s Beijing offices in a bid to get back deposits worth the equivalent of up to $30.

On Monday, a line of more than 100 people formed in Ofo’s lobby and spilled outside of the company’s headquarters in Beijing’s high-tech hub known as Zhongguancun. Around a dozen men in police uniforms were in the lobby maintaining order, allowing batches of people to enter around every 10 minutes to make their cases, based on a Caixin reporter’s view.

Many arrived after failing to receive refunds even though the company’s maximum wait of 15 days had passed. Most had paid deposits to use Ofo’s trademark yellow shared bikes, some of 99 yuan ($14.30) and some 199 yuan. Many of those bikes have gone unmaintained and are now congesting city streets across China, reversing a period of heady growth that included hundreds of millions of dollars in new investment.

The once-highflying Alibaba-backed startup has experienced an unprecedented financial crisis after more than nine months with no fresh funds. Since September Ofo has faced a flood of requests for user deposit refunds amid supplier lawsuits over unpaid bills.

On Monday, the company began receiving visitors from 11 a.m. Closing hours were later extended until 10 p.m. after hundreds of people turned out in search of refunds.

But even those showing up to the office couldn’t immediately get their money back. Instead, they were asked to write down their personal information, including bank account numbers, with the promise that they would get the money within several days, local media reported.

Earlier last month, Ofo’s founder and CEO Dai Wei said the business would go on despite its recent troubles. “We will kneel for survival, now that the winter has arrived. … But we remain faithful even at the most difficult time,” Dai said in an internal letter at the time.