Cash-Strapped, Money-Losing Ofo Says It Will Soldier On 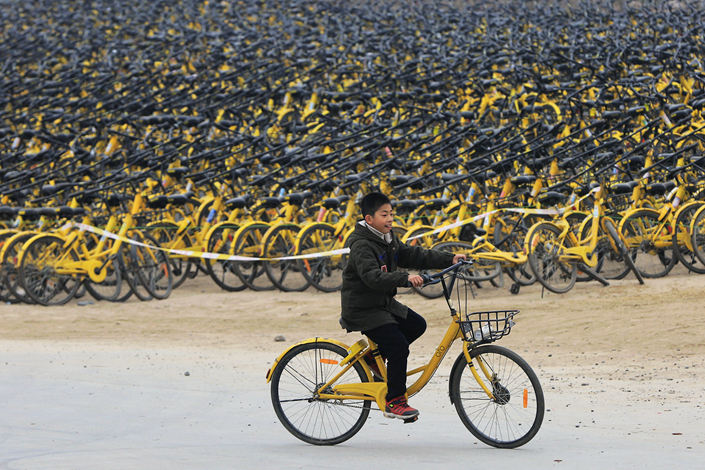 *Founder and CEO of one of China’s first bike-share startups says company will ‘kneel for survival’ as daily users fall to 3.89 million from 5.1 million earlier in the year

(Beijing) — The chief of bike-share startup Ofo has said the business will go on despite its recent troubles, as the cash-strapped, money-losing company struggles to stay afloat after months in which no fresh sources of funding have appeared.

In an internal letter, Dai Wei — Ofo’s founder and CEO — also announced a major board and organizational shakeup, including combining the legal, corporate strategy and risk management departments into a single unit.

“We will kneel for survival, now that the winter has arrived… but we remain faithful even at the most difficult time,” Dai said in the Wednesday letter, using a Chinese idiom that means refusing to give up despite being in a bad position.

His defiant tone came as one of the earliest pioneers of the dockless shared bikes that are now ubiquitous in Chinese cities — Ofo was founded in early 2014 — has experienced an unprecedented financial crisis after several years of heavy spending backed by investors including e-commerce giant Alibaba Group Holding Ltd.

Ofo’s latest funding round in March was led by Alibaba, which it said it has invested a total of $343 million for around a 12% stake in the startup, giving it a valuation of at least $2.8 billion at the time.

However, Ofo has since failed to attract new funding as investors’ confidence in the company’s ability to find a sustainable business model — users only pay 1 yuan ($0.14) to ride an Ofo bike for 30 minutes — has waned. It came under even more pressure in April when its main competitor Mobike was acquired by group-buying giant Meituan-Dianping for $2.7 billion.

By September, daily active users of Ofo’s bike rental service fell to 3.89 million from 5.1 million earlier in the year, according to data provider Jiguang. This was compared to more than 32 million daily rides at its peak late last year.

The company has since faced a flood of requests for user deposit refunds amid a series of lawsuits brought by suppliers over unpaid bills, forcing it to repeatedly deny bankruptcy rumors.

The time the company takes to process requests for deposits — each amounting to 99 yuan or 199 yuan — now stretches to over 15 days from around 3 days previously. Ofo's parent company, Dongxia Datong, is involved in at least 20 lawsuits over the nonpayment of bills brought by bicycle suppliers and logistical support providers.

Facing setbacks at home, Ofo has gradually abandoned its overseas operations, which involved more than 20 markets at its peak. The latest market the company vacated is India, where its assets were sold to a local scooter-sharing startup.