Letter: How China’s Penchant for Eugenics Led to CRISPR Babies 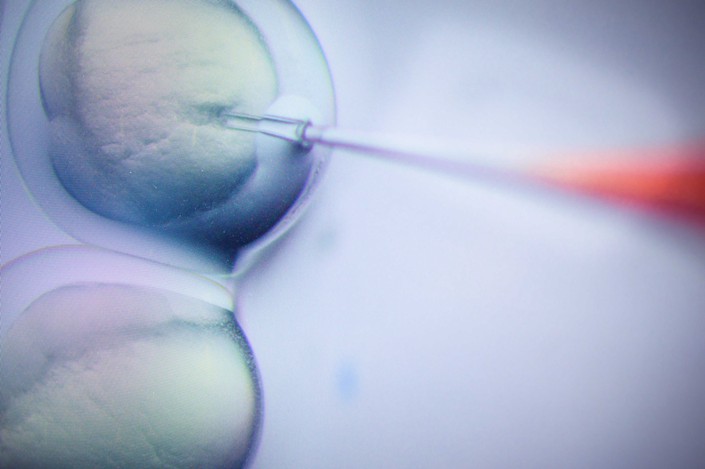 A researcher in Germany uses the CRISPR process, the technique He Jiankui said he used in his experiments, on May 22, 2018. Photo: IC

Was it only three weeks ago that rogue scientist He Jiankui shocked the world by hijacking an international gene-editing summit in Hong Kong to reveal he had altered the genes of human embryos to produce the first designer babies? The scientific community has been in an uproar since, with most denouncing He’s blatant violation of key tenets of bioethics and warning of far-reaching consequences and implications. The odd apologist’s voice seems feeble in the chorus of condemnations, but so far He has doubled down and refused to admit wrongdoing.

Besides allegedly falsifying ethical approval from his hospital and misleading test subjects on the nature of the project, He Jiankui found the time to coordinate his grand debut on the world stage, going as far as to retain the service of American PR agent Ryan Ferrell. Rather than going the traditional route of publishing his findings in prestigious academic journals and winning the support of his colleagues before the story was picked up by the media, he eschewed this in favor of releasing five Youtube videos of himself explaining his project.

It is clear that He was expecting a flood of accolades, appearance requests, book deals, job offers and so on. Based on his reactions, I wager that the violent backlash from his peers completely blindsided him. Perhaps he was too preoccupied with thinking about what he would wear when he accepted his Nobel Prize in Biology.

Everything from his flair for drama to his choice of HIV-positive test subjects points to a man eager for media sainthood, and one very much a product of his time. By engineering a situation where he is a hero who rescues innocent babes from the fate of contracting HIV, He Jiankui put on a show that caters to the normalization of eugenics, which is in line with Chinese notions of common sense.

Eugenics is a word many associate with America’s historical bans on interracial marriage, Nazi Germany’s quest for Aryan supremacy, and stolen Australian Aboriginal children. Its connection to China’s one-child policy is less obvious, but no less potent. Children were seen as valuable resources, and when only one child was permitted per family, there was tremendous pressure to secure the optimal outcome. “Optimal birth, optimal rearing” describes best practice within the one-child policy, and sounds very similar to “youshengxue” — which is Chinese for eugenics. Though selecting for males was illegal, hospitals encouraged parents to participate in prenatal screening and abort fetuses with non-terminal conditions such as Down syndrome or congenital birth defects. Born in 1984, He Jiankui is presumably the product of such a selection, and he was presumably permitted to be born because he passed such screening. This practice is still routine for pregnant women today — the staple for an overtly ableist society.

“Deformed fetuses” are encouraged to be terminated in China because people who require extra care and function outside conventional norms are largely viewed as burdens on society and the family. In lower tier cities, disabled children are often hidden from view and afforded little dignity or opportunities for upward mobility. When people with disabilities are not being pitied as subhuman, those who manage to overcome societal judgment and obstacles are then trotted out as inspiration porn for able-bodied people. Many Chinese people struggle to see beyond someone’s disability. The Chinese word for “disabled” — 残疾— is made of up characters that mean “incomplete/broken” and “disease/suffering,” leaving little room for a fulfilling existence.

Discrimination against HIV-positive people adds yet another layer of stigma. Because AIDS has been associated negatively with homosexuality and promiscuity, people who contract HIV are viewed as morally corrupt and even dangerous. A quick search on Baidu for “AIDS” reveals dozens of links to urban legends, some of which originated in the West, where deranged patients infect unsuspecting people to take revenge on society. Despite government efforts to curb rumors with public service advertising and anti-discrimination policies, HIV-positive people are regularly denied medical care and employment. It was only in 2013 that a teacher won a landmark case for HIV-related job discrimination, but the win did not free most Chinese people from the kneejerk reaction of disgust that comes from merely mentioning AIDS.

Within this social context, the ambitious young scientist identified disenfranchised people who were ripe for exploitation to concoct his perfect savior story.

When people talk about designer babies, they tend to think of the ultra-rich elite who would eagerly add “genetically perfect” children to their privileged lives. On the surface, He Jiankui forewent the lucrative position as a geneticist for the rich and famous to instead lend his charity to HIV-positive couples, these poor, pathetic abandoned lot. But as Ed Yong pointed out in his piece dissecting various damning details about He Jiankui’s project, the entire narrative is incredibly manipulative. Despite He’s claims that he believed the subjects needed this technology and that he was willing to take the heat for doing something he believed in, he did not actually address an unmet medical need. There are already medical treatments available that can minimize an infant’s possibility of infection (though they are likely not available to HIV-positive patients in China).

He Jiankui might have believed his rogue operation was a godsend — offering these couples a chance not only to have children of their own, but to liberate their offspring from the same marginalized existence they experience. With this feat of literally destigmatizing these children, He Jiankui might as well have slapped a halo on the top of his head.

China’s prevailing ableism has created a vulnerable population of people with disabilities and stigmatized illnesses who are not adequately protected against the exploitation of fame-hungry predators like He Jiankui. As the scientist himself said: “If I did not do this, someone else would have.” He is right. The scientific community in China likely harbors more who abuse this disenfranchised group of people for their own gain. Let us hope the tale of He Jiankui can serve to inform those who would be tricked into similar situations.

Frankie Huang was born in Beijing and raised in New Jersey. Currently, she lives in Shanghai where she works as a strategist at a consultancy.