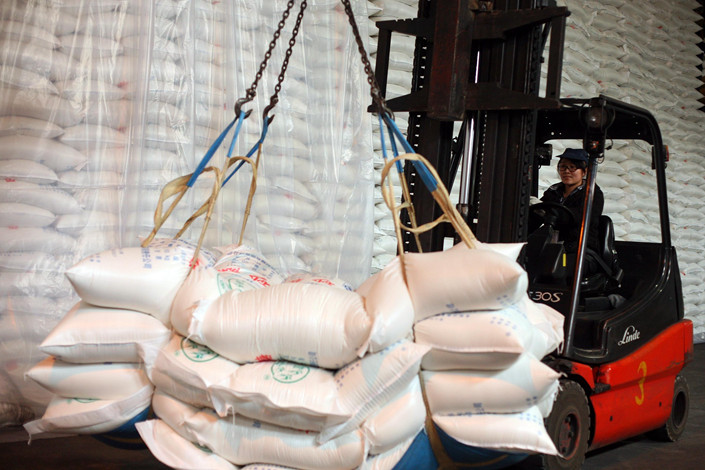 A forklift driver moves sugar at a factory in Guangxi province. Photo: VCG

CAMC said the $95 million contract with Ethiopia Sugar Corp. will involve work over the next 14 months on a sugar processing complex in the country’s Amhara region, according to a stock exchange filing (link in Chinese) on Tuesday. It said new facilities being built under the contract will include storage space for raw and processed sugar, as well as electric generating facilities.

The sugar is most likely for domestic consumption in the socialist country, said Billy Wang, a partner at Prasios, an agriculture and natural resources advisory firm.

The investment comes as Beijing pushes its infrastructure builders to export their skills to other developing markets under its Belt and Road Initiative, which focuses on such projects, often with Chinese financing. China has been particularly active in the African Horn nations of Ethiopia and adjacent Djibouti, the former of which contains major oil and gas reserves, and the latter access to shipping lanes for export of such resources.

In June, a unit of China Poly Group Corp. started testing output of crude oil in an Ethiopian border region that the government estimates could ultimately provide as much as $7 billion when fully operational. China is also helping landlocked Ethiopia build a pipeline that will connect the Ogaden Basin with neighboring Djibouti, which has a coastline on the Red Sea.

China has also been helping Djibouti develop its related infrastructure, including the launch of the first stage of a China-sponsored free trade zone in the country this summer, in what the two hope will become the continent’s biggest free trade zone located on a major global trade route.

Despite the development of energy resources and accompanying infrastructure, Ethiopia is still largely agricultural.

CAMC’s latest work on the sugar complex marks a fairly standard engineering, procurement and construction (EPC) contract, which has been important fare for Chinese infrastructure builders going to Africa, said Prasios’ Wang. But he added that such business is slowly drying up.

“Ethiopia, however, is a much more complicated story,” he said. “Chinese engineering can help Africa to industrialize because it is the most cost-effective.”

CAMC said its relationship with the government-affiliated Ethiopia Sugar Corp. was worth about 1.4 billion yuan ($203 million) in its last fiscal year. The latest $95 million contract is the equivalent of about 6% of CAMC’s total revenue in 2017.