China’s Efforts to Promote Garbage-Sorting Have Gone to Waste 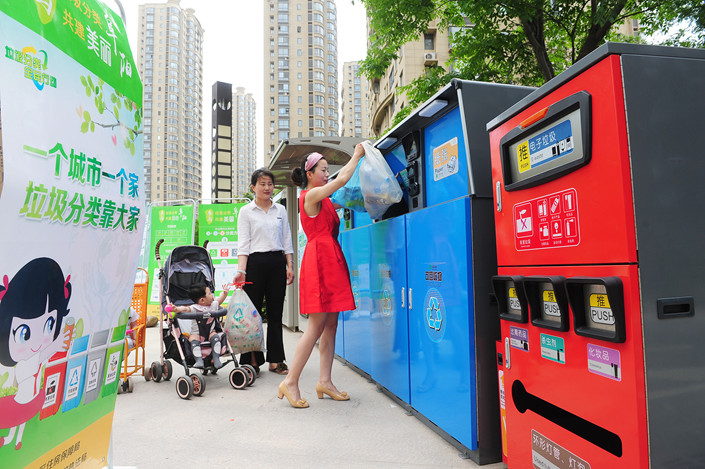 Residents of Fuyang, Anhui province, sort their garbage and recyclables into the appropriate disposal bins on May 14. Photo: VCG

China’s efforts to get citizens to sort their garbage seem to have gone to waste, as nearly three-quarters of urban residents were unable to correctly identify how to sort their trash, according to a survey of 3,600 people living in major Chinese cities.

The survey, conducted by the Vanke Foundation and data consultancy Dataway, involved 102 residential communities in 17 cities, including Beijing, Shanghai, and Guangzhou. The Vanke Foundation is affiliated with China Vanke Co. Ltd., one of China’s largest real estate developers.

“Residents have insufficient knowledge of how to classify plastic waste,” the report said. “The channels for recycling, use of recyclable plastics, and general knowledge of the issue must be improved.”

The researchers also warned that the actual rate of accurate waste-sorting may be lower than the 27.7% reported, as respondents that knew how to sort waste might not actually be sorting it in practice.

Sorting waste can be as basic as separating items into those that are recyclable and nonrecyclable, but also includes categories like hazardous waste and biodegradable kitchen waste. If China’s cities are to implement more environmentally friendly waste management mechanisms — instead of the dumping and burning that is prevalent now — persuading people to sort their own waste is essential.

China has been trying to encourage citizens to recycle for many years, but last year renewed its efforts. In March 2017, the State Council issued a plan for improving the domestic waste-classification system, proposing new legislation and standards for waste-sorting by 2020.

The plan said the recycling rate in 46 cities should reach at least 35% by 2020. The plan aims to develop institutionalized ways for waste to be sorted and be sent somewhere other than landfills or incinerators through pilot programs in metropolises around the country.

The new plan so far seems to have had little effect on public awareness, which members of the research team who led the survey said is a foundational step for improving the recycling and waste management system. “If the individual can do a good job on their own, it can save the costs of late-stage manual sorting,” members of the Dataway research team told Caixin.

When it came to disposable materials such as foam, plastic tableware, paper products, and plastic bags, the gap in awareness was even more severe. Only 15.9% and 15% of respondents believed that plastic bags and paper towels respectively are “general waste.”

The Vanke-Dataway survey also found that the environmental problems that residents are most concerned about are air quality, water quality, and noise pollution, with waste reduction and recycling ranking fourth; 86.6% of respondents agreed that “garbage classification is everyone’s responsibility,” but nearly half agreed that “other people don’t separate their waste, and I too am in the habit of not doing it.”

Last year, the southern Chinese metropolis of Shenzhen, one of the cities included in the State Council plan, began fining individuals and businesses that failed to separate kitchen waste from other types of waste.