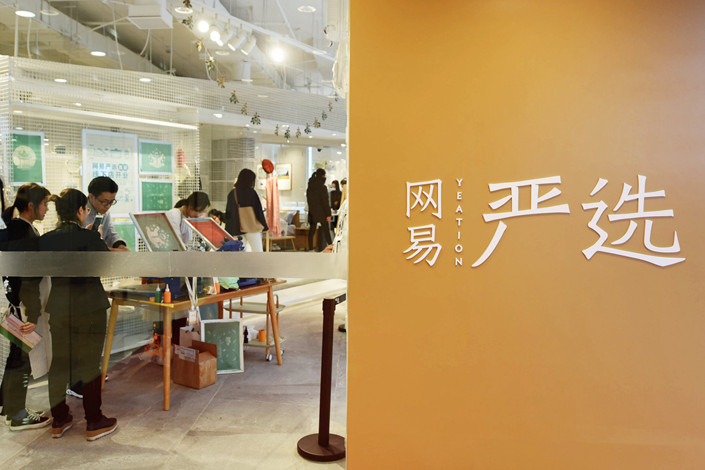 Yanxuan, which means “serious choice” in Chinese, sells products made by manufacturers that NetEase claims are suppliers to top international brands. Photo: IC

Gaming giant NetEase launched its first brick-and-mortar store for its e-commerce brand, NetEase Yanxuan, on Tuesday, as it tests the waters for an offline expansion.

The 3,229 square foot store is located at a shopping mall in downtown Hangzhou, Zhejiang province, where NetEase Inc. is headquartered.

China’s second-largest gaming company behind Tencent Holdings Ltd. made a foray into the booming e-commerce scene in 2015. It currently runs two brands: Kaola and Yanxuan. Netizens have labeled the latter a “copycat” for its striking resemblance to Japanese lifestyle brand Muji.

Yanxuan, which means “serious selections” in Chinese, sells products including fashion apparel, accessories, furniture and home appliances made by manufacturers that NetEase claims are suppliers to top international brands like Gucci, Burberry and Ugg. The practice has attracted claims of intellectual property infringement.

The products sell far cheaper on Yanxuan than they would at a brand’s store. An original pair of Ugg ankle boots retails for just over $200 on both JD.com and Tmall — authorized sellers — while on Yanxuan, a similar pair made by an “Ugg manufacturer,” but with a Yanxuan label, is priced at just $45, according to a Forbes report in April.

China’s e-commerce space is dominated by Alibaba Group Holding Ltd.’s Tmall and JD.com Inc., which host vendors selling millions of items at various price points that could be confusing to some. The birth of mid-to-higher-end platforms such as Yanxuan, Taobao Xinxuan (owned by Alibaba), Suning Jiwu (owned by Suning.com Co. Ltd.) and Xiaomi Youpin (owned by smartphone maker Xiaomi Corp.) sell selected items with a higher price tag, but tout better quality as they select the vendors with which they partner.

“We are planning to open more physical stores in 2019. We plan to introduce flagship stores with 800 square meters (8,611 square feet) of space,” a company spokesman said.

The shop, which touts itself as a “lifestyle choice for the middle class” in a press statement, was designed by a famed Japanese designer.