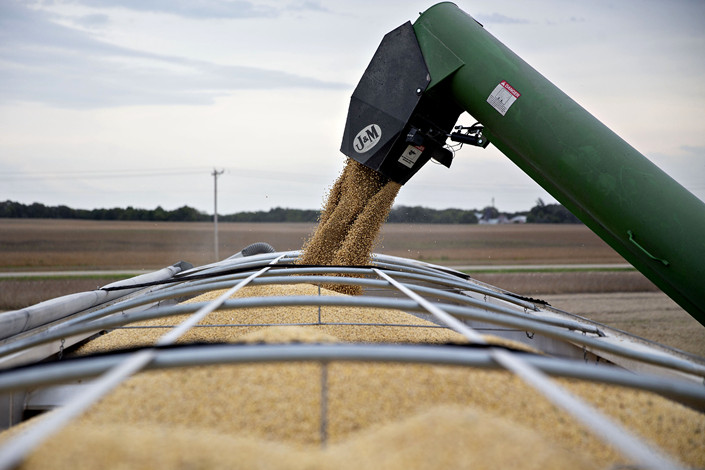 Soybeans get loaded into a grain cart in the U.S. on Sept. 18. Photo: VCG

China has begun buying U.S. soybeans again, according to official sources in both countries, as Washington and Beijing call a truce in their trade war while trying to reach a long-term agreement by a March deadline.

Private exporters in the U.S. have reported sales of about 1.2 million metric tons of soybeans to China for delivery during the 2018/2019 marketing year, the U.S. Department of Agriculture (USDA) said in a Wednesday notice on its website. It added that the marketing year for that period began on Sept. 1.

China was traditionally one of the biggest buyers of U.S. soybeans, which are mostly used to feed livestock. But buying ground to a near halt in July after China imposed punitive tariffs on the crop in retaliation for similar U.S. tariffs on imported Chinese goods. The halt of such a major supply forced China to look to other sources for soybeans, and led some U.S. growers to stockpile the crop to wait for a thaw in tensions.

Such a temporary thaw came earlier this month, when U.S. President Donald Trump met with Chinese counterpart Xi Jinping on the sidelines of a G20 meeting in South America, and agreed to delay threatened new tariffs while they worked on a new trade deal over the next 90 days. Since then China has temporarily eliminated a previous punitive tariff on imported U.S. cars as a goodwill gesture, though it has yet to publicly announce similar action for soybeans.

On the same day the USDA confirmed new sales of the crop to China, leading Chinese grain company COFCO also said it had resumed buying American soybeans. “Based on the consensus reached by the heads of state of China and the United States during the G20 period, according to domestic market demand, COFCO bought U.S. soybeans in two batches,” COFCO said in a statement (link in Chinese) on its website.

Chinese stockpiler Sinograin announced a similar move in a its own brief statement dated the same day. “In order to implement the consensus reached by the heads of state of China and the United States, our company recently purchased some batches of soybeans from the United States,” it said.