By Ke Dawei and Huang Shulun 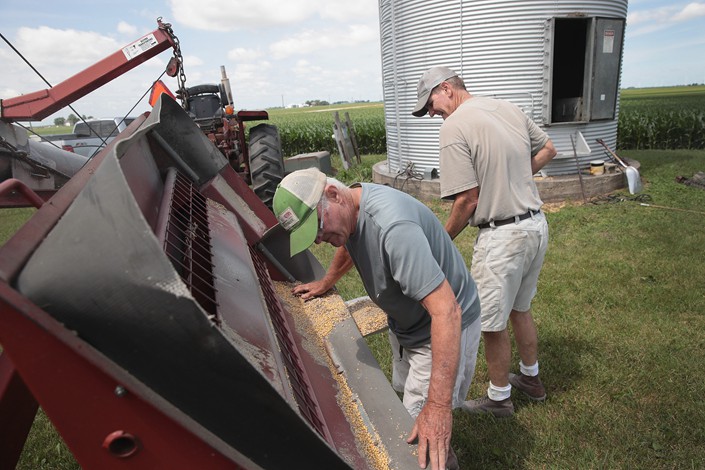 American farmers load soybeans from a grain bin onto a truck before taking them to a grain elevator on June 13. Photo: VCG

The Star Jennifer has become the second ship laden with American soybeans to dock in China since a punishing 25% tariff was imposed on the commodity last month, with 700,000 tons of beans worth around $20 million set to be unloaded.

Shipping data indicated that the Star Jennifer docked at the Port of Dalian on Thursday after spending about three weeks moored in the port’s approach, apparently waiting to see if the tariff would be lifted.

It follows the arrival of the Peak Pegasus, which docked on Monday. The ship had made headlines in July due to its dramatic race to reach China before the tariffs came into force, only to reach the coast hours too late.

U.S. soybeans were one of the first items to be slapped with a 25% retaliatory tariff from Beijing after the trade war finally erupted last month, when the U.S. and China hit each other with $34 billion worth of tariffs.

Yet with China the world’s biggest soybean consumer and the U.S. the biggest producer, experts predicted that China will struggle to find an adequate supply of cheaper soybeans elsewhere to meet demand, particularly with the production season in Brazil, the second-biggest producer, drawing to a close.

While Beijing has shown no sign of relenting, it appears domestic buyers have decided to resume buying some American soybeans, even with the markup. Data from the U.S. Department of Agriculture also showed that shipments of soybeans destined for China resumed on July 29 after a three-week hiatus.

The trade war nevertheless looks set to harm both U.S. soybean producers and Chinese consumers. A report from the U.S. Department of Agriculture last week lowered its forecast for soybean sales over the next year by 11% to 62.3 million tons.

Zhang Xiaoping, the China representative of the U.S. Soybean Export Council, said that American soybean growers have been on the verge of turning unprofitable for the last three years, and the trade spat may push them into the red. “If there were no trade war, this would not be the case at all,” he said.

Since the trade war erupted, industry associations on both sides of the Pacific have been working together to lobby the two governments to try to prevent a further escalation, but Zhang was not overly optimistic about the outcome. “At present, there has been no obvious impact,” he said.

Still, there remains hope of a breakthrough. On Thursday, China’s Ministry of Commerce revealed that it had accepted an invitation from the U.S. to resume trade negotiations in Washington next month.

Yu Bokun contributed to this article.