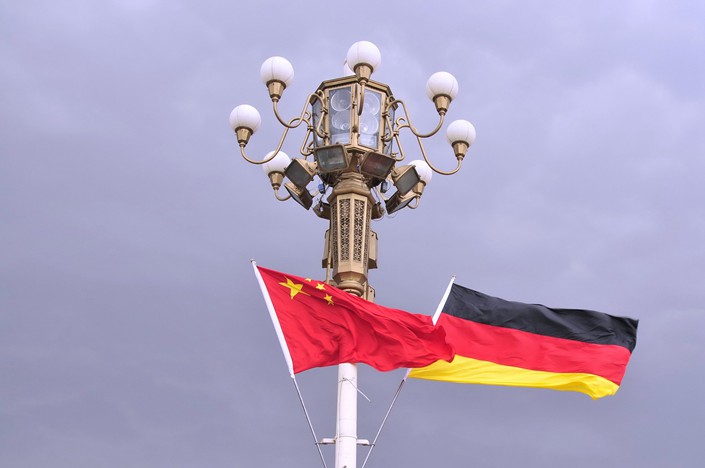 The German government has increased controls on foreign investment, a move many see as targeting China.

The move lowers the threshold for government review of minority acquisitions by non-EU companies in sensitive sectors such as defense and information technology. Bids for a 10% stake in such companies will trigger a review, down from the current 25%. The change does not require parliamentary approval and will come into effect this year or early next.

Germany has been treading carefully to avoid fallout from the Sino-U.S. trade war while curbing growing suspicion of Chinese businesses investing in Germany. The nation’s current attitude towards investment and exchange with China is complex. Wary of the increasing number of Chinese acquisitions of German companies, Germany is also pushing for China to further open its own markets.

In November, Caixin met business leaders and officials in Germany to gauge attitudes toward Sino-German cooperation and investment. Many pointed to science and technology as sectors with great development potential. In German business circles, “cooperation + competition” is the theme of the new model for economic cooperation between the two countries.

According to GTAI, a federal agency that promotes foreign investment in Germany, Chinese enterprises are drawn to invest there because of the high brand value of “Made in Germany” and the flourishing research and development (R&D) environment.

According to Friedrich, Chinese high-tech enterprises are investing more in German sectors such as machinery manufacturing, automotive parts suppliers and energy supply. In turn, German companies have begun to set up research and development centers in China, especially in the fields of artificial intelligence (AI) and gene technology.

In December 2017, XCharge, a Beijing-based supplier of charging equipment and energy solutions for electric vehicles, established its first overseas office in Hamburg. Its main tasks are to provide services and develop software.

At the time, XCharge said that they chose Germany due to its favorable research and development environment. According to Hou Yifei, the company's chief operating officer, Germany has a lot of energy software R&D talent and the market is mature.

Intelligent electric vehicles look to be one area ripe for strong Sino-German cooperation. German Chancellor Angela Merkel, during her previous visit to China, struck a deal with the Chinese leaders to cooperate in the field of intelligent, networked vehicles. The German side believes that the themes of “Industry 4.0” and AI will play an important role in expanding bilateral economic and trade relations between Germany and China.

After visiting Germany in November and meeting with Merkel, Chinese Vice Premier Liu He said China and Germany would focus on ties in the digital economy, finance, manufacturing and small and medium-sized enterprises.

Speaking to Caixin, former German Ambassador to China Michael Clauss said Germany’s world-leading manufacturing industry and China’s strong position in new technologies such as AI have given the two nations a strong, complementary space to cooperate.

Meanwhile Stefan Franzke, CEO of economic investment promotion agency Berlin Partner for Business and Technology, told Caixin that though many Chinese companies would seek to merge or make acquisitions when investing in Germany, German startups do not want to be acquired as a whole. “The goal of startups is to rapidly expand their scale and enter the market,” he said. “But the most basic and critical part of cooperation is mutual trust.”

But few were truly spooked by the tightened review regulations enacted by the German government on Dec. 19. Song Hailiang, president of China Communications Construction Co. Ltd., told Caixin that the German government’s cautious attitude would soon give way to an overall trend of increasing cooperation would continue.

GTAI President Jurgen Friedrich told Caixin that though there has been much discussion of the Kuka acquisition in German media, Kuka’s sales in China have continued to grow. This, he said, showed that Kuka developed well after its acquisition, which was mutually beneficial. He claimed the problem was merely “excessive attention.”

Germany’s overall doubts about Chinese investment are not as serious as described by German media, he further claimed. “There have also been American companies that have completely reorganized the management team after acquiring a German company, but the media didn’t report on politicization then,” he said. “Yet they have often raised the acquisition of Kuka.”

“Chinese companies are generally very cautious, especially in terms of ‘localization’ — most have retained the original German management team after the acquisition,” he said.

“A true friend should be able to criticize openly and honestly,” said Andreas Bilfinger, head of GTAI’s corporate relations. “Disputes happen. But it cannot lead to the breakdown of bilateral economic and trade relations.”

Germany’s Economy Ministry spokesman Korbinian Wagner told Caixin that Germany welcomed China’s moves to open its markets to the rest of the world, and looked forward to “the gradual abandonment of mandatory joint venture requirements and the liberalization of financial markets.” However, such initiatives must be followed by concrete measures that will create a level playing field allowing German companies in China the same market access conditions as Chinese companies have in the EU.