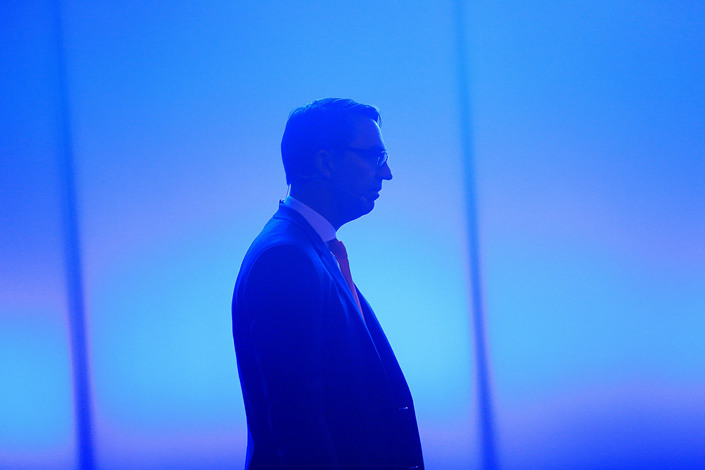 Kuka AG CEO Till Reuter will leave the company in December. Photo: VCG

The early departure of the CEO of German industrial robotics-maker Kuka AG has put a spotlight on Chinese overseas acquisitions and the importance of post-merger transitions.

Chinese companies that acquire peers in the West have to tread a fine line between labor laws, finding a consensus on strategic development, and keeping promises of job security, market watchers said.

The comments came after Kuka’s owner, Chinese home-appliance giant Midea Group, this week dismissed Till Reuter, who had been with the German manufacturer since 2009.

Reuter’s contract was renewed last year and was to last until 2022. But Kuka said on the weekend that Supervisory Board Chairman Andy Gu, from Midea, had spoken with Reuter about Reuter’s departing early. An announcement on Monday that Reuter would leave next month followed. No reason was given.

The came despite the fact Midea, which acquired Kuka for 4.6 billion euros ($5.2 billion) in 2016, had signed a contract that guaranteed jobs and plants in Germany until 2023.

In November 2017, Kuka said it was cutting 250 of its roughly 4,000 positions in Germany, a move Reuter said was a result of “fierce international competition in engineering and not the result of Midea shifting Kuka production to China or clients’ distrust of the new owners.”

“Many reasons can destroy the value for an acquisition,” said Tao Jingzhou, a managing partner of law firm Dechert LLP in Beijing. Differences in strategic development vision are often at the top of the list.

Tao said managing an acquired company under Chinese control was always a balancing act, given European companies may not trust the management know-how of their Chinese buyers.

The Financial Times cited a person familiar with the situation as saying tensions between Reuter and Gu arose regarding strategy for a Kuka-Midea joint venture in China, the market with by far the greatest potential for robotics and industrial automation.

Reuter would have liked to have continued in his role, but he accepted that Midea could now call the shots as it owns nearly 95% of the shares, the report said.

A growing list of German companies, including Kion, Putzmeister and KraussMaffei, has come under Chinese ownership in recent years. Midea, best known for air conditioners and washing machines, hopes to extend Kuka’s automation at its factories as it faces rising labor costs in China.

“When a European company is sold in an auction process, the speed involved in signing the deal does not allow a foreign buyer to fully contemplate the intricacies of operating a company in another jurisdiction,” Betty L. Louie, a partner at law firm Orrick in Beijing, told Caixin.

It is important for Chinese investors to start addressing post-merger integration early in the acquisition process, or they risk facing issues with management and organizational structures, decision-making, transparency and labor laws, she said.

Kuka issued a profit warning in October amid sluggish China sales, and forecast sales for the year would be 3.3 billion euros with an operating profit of 4.5%, down from the earlier-forecast 3.5 billion euros and 5.5%.