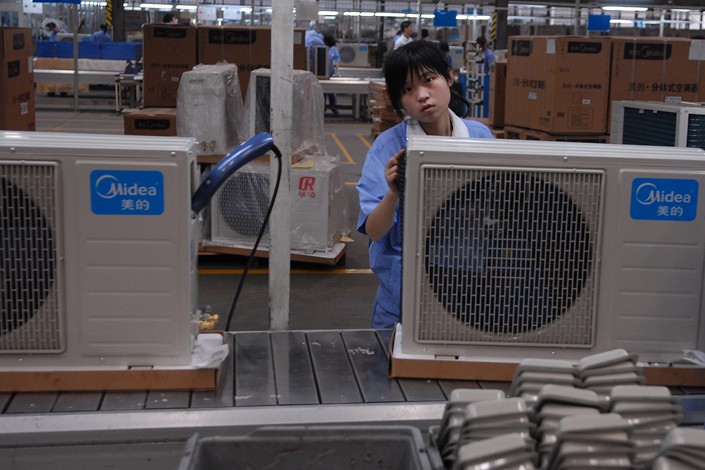 Midea air conditioners are made at a factory in Wuhu, Anhui province. Photo: VCG

With planned investment of 13.5 billion rupees ($185 million), the base in the western Indian state of Maharashtra will focus on building heaters, air conditioner compressors and other home appliances, Midea said on its official WeChat social media account in a post on Sunday. The project is located on a 270,000-square-meter (2,906,000 square feet) parcel, with operations expected to begin in the start of 2020.

“Maharashtra is an engine of India’s economic growth. We have taken a number of measures to establish a convenient support system to make Maharashtra the top choice for investment,” said Shri Devendra Fadnavis, chief minister of Maharashtra. “The development of the park will help to build Maharashtra into a manufacturing, production and R&D center.”

Midea is one of a handful of Chinese home-appliance makers with global ambitions, alongside rivals like Haier, Hisense and Gree. Its Indian expansion also reflects another trend by Chinese firms moving into developing markets, as they race to repeat their success at home by pursuing countries with similarly emerging new middle classes.

“We are sincerely pleased with the establishment of this Midea science and technology park,” said Midea founder He Xiangjian. “The park will adhere to the company’s vision of ‘perfecting technology, perfecting life,’ and will strive to innovate and usher in new development, and continue to provide leading-quality products for the Indian market.”

Outside the appliance realm, many of China’s smartphone, networking equipment and solar panel makers have also looked to India for growth in recent years as their home market becomes saturated. A growing number of those are setting up local manufacturing bases, including the likes of smartphone-makers Xiaomi and Oppo.

For its part, Midea has also been active on the global stage, and now has a worldwide network of product design centers in such places as Japan, Italy, Singapore and the U.S. The company now employs 35,000 people in its overseas operations, which also include 18 overseas production bases and a sales networking reaching into 200 regions around the world.