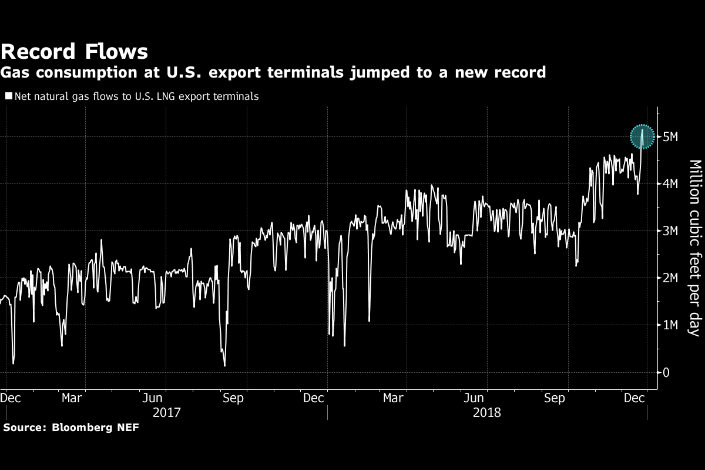 (Bloomberg) — China last month imported two tankers of U.S. liquefied natural gas, nudging open a doorway that had been closed shut for a month at a time when America is rapidly expanding its ability to export the heating fuel.

The three operating U.S. terminals soaked up more than 5.1 billion cubic feet of natural gas from American shale basins on Sunday, the most ever. With two more U.S. terminals slated to open in the first quarter of 2019, China’s re-emergence as a customer as wintry weather descends offers a much-needed outlet for exports.

“This is important because priced U.S. natural gas with the tariff is still economical compared to other sources,” said Het Shah, founder of Analytix.AI, an energy market data analytics company in Calgary. “These tankers probably left the U.S. gulf coast in late October.”

While the imports offer short-term hope, Chinese companies are still unlikely to cement long-term deals for more LNG, hindering future projects, without Beijing and Washington resolving their differences over a festering trade war that’s spurred tit-for-tat tariffs in a wide variety of sectors.

The world’s second largest economy imported a record 5.99 million tons of LNG in November even as its reliance on American LNG fell. U.S. imports reached 138,892 tons, according to data from China’s General Administration of Customs. That equates to about 6.3 billion cubic feet of gas, or two tankers worth, Shah said.

In November a year earlier, China imported six tankers of American LNG at a time when China’s traditional suppliers in Central Asia were unable to keep up with demand as cold weather descended. The Asian giant was forced to turn increasingly to the U.S. for the fuel after requiring both businesses and homes to stop burning coal to cut pollution.

China has imported 60 cargoes from the U.S., or 12% of total shipments from the lower 48 states, according to U.S. Energy Department data going back to February 2016.